Airdronians among group evacuated from Haiti 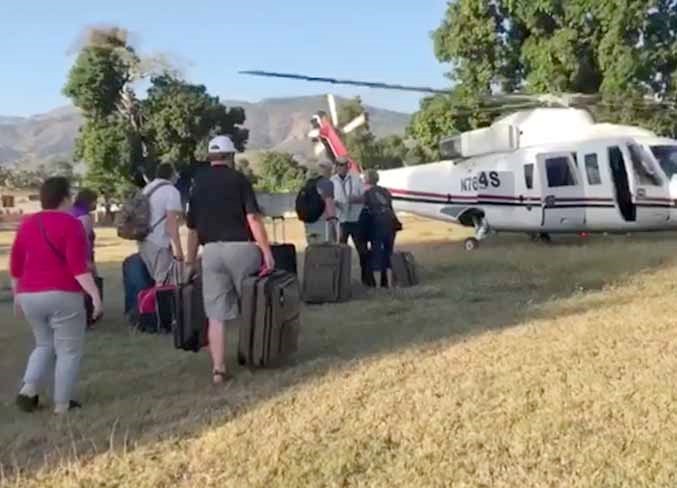 A video posted to Haiti Arise's Facebook page showed team members evacuating the organization's secure compound by helicopter. Three helicopter trips were needed to transport the team to the airport in Port-au-Prince, which was unreachable by road.

The civil unrest in Haiti is hitting close to home as two Airdronians were among a group of Southern Albertans working with the missionary group Haiti Arise that were quickly evacuated Feb. 16.

“In the last week, the country has seen a great deal of rioting,” said Tammy Love, communication spokesperson with Haiti Arise. “We’ve had a team on the ground from Alberta, including Lisa Honorat and her daughter Miesha.”

Despite the turmoil, Honorat – who founded Haiti Arise with her husband Marc – wrote in a letter to the press, “I must say, I am still grateful that our team was there and that we all had the experience we did. There is so much we can learn from the resilience, tenacity and faith of the Haitian people.”

The Government of Canada issued an advisory Feb. 15 to avoid all travel to the country due to the continued civil unrest. According to travel.gc.ca, violent protests have been underway since Feb. 7, and have resulted in casualties.

Honorat said tensions in Haiti have been running high since the country’s last presidential election in 2016. There has been widespread frustration with current President Jovenel Moise, and protesters seek his resignation.

Love said the team was unable to travel from Haiti Arise’s compound in Grande-Goave to the airport in the country’s capital Port-au-Prince due to roadblocks and barricades on the roads.

“When we couldn’t get them out, they basically had to hunker down in the compound,” Love said. “We’re safe where we are, it’s a guarded compound, but part of the challenge was food and water, and access to some of those basic needs. When you have a bigger team on the ground, it’s harder to provide for them, as well.”

According to Honorat’s letter, the team originally meant to stay in Haiti from Feb. 3 to 13, but remained at the compound for three days past its scheduled departure before they could be evacuated.

“Part of the challenge was there was a lot of people trying to be evacuated,” Love said. “The team was initially supposed to evacuate on Feb. 15 – they had scheduled an airlift out.”

However, because of backlogs and the number of trips needed to get the team from the compound to the airport, the group could not be moved before nightfall and the evacuation had to be delayed until the morning of Feb. 16.

Two team hosts and 24 missionaries were flown to the airport in three separate trips, with another two trips required to airlift members of a separate organization from the compound. The team then flew out of the country to Miami, and eventually arrived in Calgary Feb. 17.

Marc Honorat – who was born in Haiti but has lived in Airdrie as a Canadian permanent resident – chose to stay behind at the Haiti Arise compound.

“He didn’t want to leave the Haitian people amongst what was going on,” Love said. “Currently, they’re planning on doing some food drives and some different things to get rice, beans and oil out to the Haitian people.”

The organization will continue to monitor the situation, Love said, and will evacuate Marc if it continues to deteriorate. All further trips to the country hae been  cancelled until further notice.

Haiti Arise has operated in Haiti since 2003, helping with disaster relief, building houses, caring for orphans and running schools. Love said the organization is hopeful they’ll be able to resume sending teams as quickly as possible once the situation settles.

Haiti Arise is currently collecting monetary donations to assist in the purchase of food to be distributed during the ongoing protests. Donations can be made at haitiarise.org