Airdrie’s Smart Cities Management Team is working to complete a comprehensive proposal for a project to improve overall health among residents as part of the Smart Cities Challenge.
Dec 13, 2018 12:01 AM By: Ben Sherick 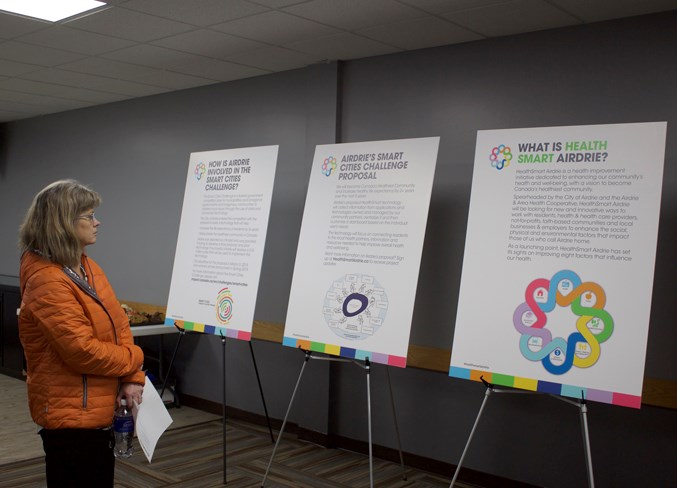 A resident takes time to read up about HealthSmart Airdrie and the Smart Cities Challenge during an open house at the Town and Country Centre Dec. 6.

Airdrie’s Smart Cities Management Team is working to complete a comprehensive proposal for a project to improve overall health among residents as part of the Smart Cities Challenge. “We’ve done a lot of work since we were named a finalist,” said Leona Esau, intergovernmental liaison for the City of Airdrie and co-lead on the Smart Cities Management Team. “We really took something that was very much an idea in application form…and we’ve now started to populate each individual section of the comprehensive proposal.” Airdronians had a chance to learn more about efforts to make the city Canada’s healthiest community at an open house Dec. 6 at the Town and Country Centre. According to Esau, the open house was part of an ongoing public consultation on the project, intended to encourage residents to think more about their health. The Smart Cities Challenge was issued by the federal government in late 2017, Esau said. In partnership with the Airdrie and Area Health Co-operative (AAHC), the City submitted an application in the spring of 2018. “We looked at what was going on in the community – we’ve got lots of initiatives as a City, but the one that has the most impact is the work that the AAHC is doing, so we partnered up on an application,” Esau said. On June 1, Airdrie was announced as one of 10 finalists for two $10 million prizes. If won, the funding will be used to create and implement "innovative technology" aimed at supporting the well-being of residents. The technology, according to an information sheet supplied at the open house, will “connect residents to the health information they need” by delivering “customized content to each user based on their identified needs,” with a focus on preventative health. “There’s lots of big technology behind it, but really, it’s about empowering Airdrie citizens and giving them the information and access to the resources they need – local resources – to make better choices about their health and their family’s health,” Esau said. Adam Morand, president of Oasis Technology, said the underlying technology is intended to build an open source “transactional platform” that accesses existing medical data. “There’s thousands of databases in Alberta,” he said. “In Airdrie alone, we have hundreds of databases that are already part of the community, part of the social fabric.” The system does not store data, Morand said, but allows individuals to compile their own personal medical data and keep it at the tips of their fingers. “What we’re looking at as an underlying platform is an open-source, third generation blockchain that allows you to have your private data, because you, as a citizen, are allowed to go to every single organization and go, ‘That’s my data. I want my stuff, for me, to answer my questions,’” he said. Part of the challenge, according to Esau, is creating something that can be replicated elsewhere. “We have to prove that it’s sustainable, so there has to be a model behind it,” Esau said. “It has to be scalable – so, it has to be able to be delivered in smaller communities, remote communities and large urban communities. We have to make sure that we do those things in order to be considered one of the winners of the $10 million prize.” The team has until March 5, 2019, to complete and submit its proposal, Esau said. “It covers off everything from telling a story about our community, identifying some challenges that our community is facing, and then really explaining how this technology we’re proposing will help us not only address those challenges, but also address our challenge statement, which is really big – to involve everyone in the community in making better decisions with their health to increase healthy life expectancy by three-plus years,” Esau said. “Airdrie will become the healthiest community in Canada, because of the efforts of these people and other people who have been pushing this agenda for the last number of years,” Mayor Peter Brown said. The winners of the two $10-million prizes will be announced in the spring of 2019.