Local transit users will see a sense of normalcy return in the weeks to come, after Airdrie City council unanimously approved Airdrie Transit’s (AT) resumption of services plan at a June 29 special council meeting.

As per the plan, AT resumed collecting user fees July 1, after waiving the fares in early April. As of July 6, it will resume the Inter-City Express (ICE) routes, which carry Airdrie passengers to and from downtown Calgary.

“We’re reintroducing and putting forward a plan that we feel reintroduces services incrementally and in a conservative way that reflects both the needs of our ridership and financial stewardship," said Chris MacIsaac, AT team lead.

AT will also remove all trip restrictions for its Dial-a-Bus service July 6, MacIsaac said, which will "enable any resident in the community to access any service or any other need they may have for mobility within our community.”

AT plans to reintroduce its fixed-route hourly service in August, MacIsaac added. By September, he said, AT aims to cease its Dial-a-Bus service and increase local route service to the levels seen before the pandemic.

COVID-19 had a significant impact on local transit. In early April, AT halved its seated capacity, waived user fees and suspended the ICE route. Local Routes 1 and 3 – which operate along arterial roads and travel a circuit on Main Street, Yankee Valley Boulevard, East Lake Boulevard and Veterans Boulevard – were also suspended. In lieu of Routes 1 and 3, local transit service has operated on a demand-responsive basis.

Route 900, which services CrossIron Mills mall and the Rundle LRT station in northeast Calgary, was reduced to operating one bus every two hours on a reduced schedule.

According to MacIsaac, the pandemic resulted in AT’s daily average ridership dropping by as much as 95 per cent in mid-April, with Route 900 buses and Dial-a-Bus shuttles each carrying fewer than 40 passengers a day. Before the pandemic, he said AT was providing as many as 1,500 passenger trips a day. 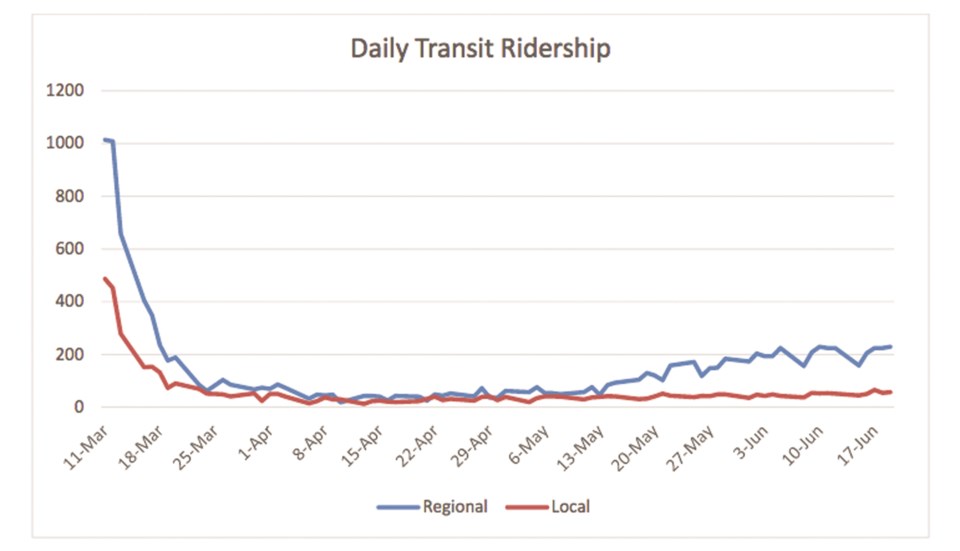 “Our customer base was not using transit at the same levels they were prior to the pandemic outbreak,” he said. “This really started to see a slide when the announcement was made by Rocky View Schools and other school divisions that the schools would close. What we experienced from that moment forward was a rapid change in travel behaviours and demand for service – and that slide continued all the way through April.”

However, demand for local transit services picked up in May, MacIsaac said, after the Alberta government implemented Phase 1 of its economic relaunch strategy. The reopening of CrossIron Mills mall, for instance, dramatically increased the demand for Route 900 service.

That demand has continued to climb – according to AT data, as many as 132 customers were unable to be accommodated on Route 900 between June 1 and 20 due to the buses’ capacity limits. 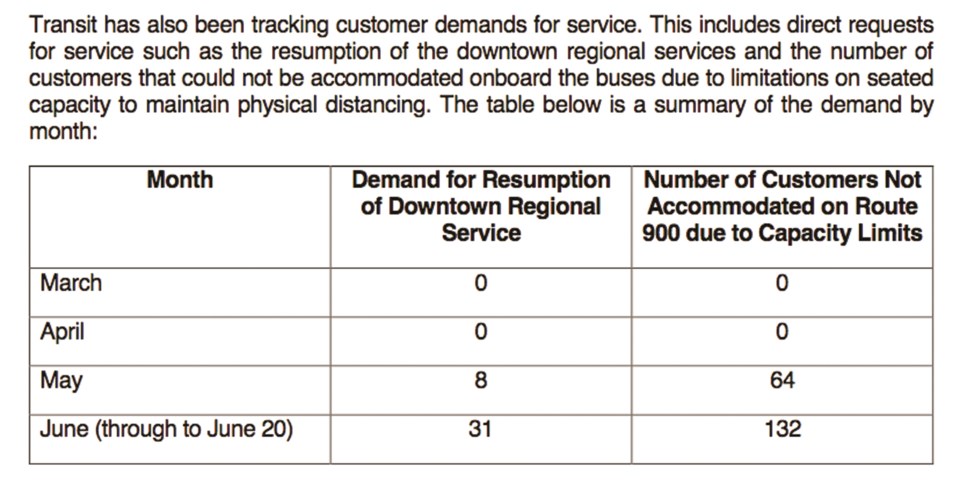 While transit demands were way down in March and April, Airdrie Transit Team Lead Chris MacIsaac said demand has continued to grow since early May, following the government's implementation of its economic relaunch plan. Image submitted/For Airdrie City View.

The biggest unknown for AT is what schools will do in September. MacIsaac said recent increases to transportation fees by school divisions, coupled with lower monthly transit pass costs for students, could result in an influx of students using transit next year, which could impact ridership capacities.

Coun. Darrell Belyk asked if two days was sufficient notice to inform Airdrie transit riders that fares were going to be reintroduced. MacIsaac replied AT would take an understanding and educational approach to reintroducing user fees, saying drivers will provide passengers a one-week grace period.

“We understand this is a change and we’re going to be very lenient and understanding for the first week,” he said.

Coun. Kelly Hegg asked if resuming ICE with two morning and afternoon trips instead of three would provide AT any significant savings, given the lower number of passengers ICE typically sees during the summer. MacIsaac said doing so would result in savings of between $3,000 and $5,000 a month.

Financially, AT has experienced more than $1 million in lost revenue as a result of waiving fees in early April, MacIsaac said. Those losses were offset by cost-savings of roughly $970,000, as a result of offering reduced service.