Airdrie’s efforts towards pollinator conservation have been officially recognized, with the city now designated as Canada’s 23rd Bee City Canada community.
Apr 17, 2019 11:00 AM By: Ben Sherick 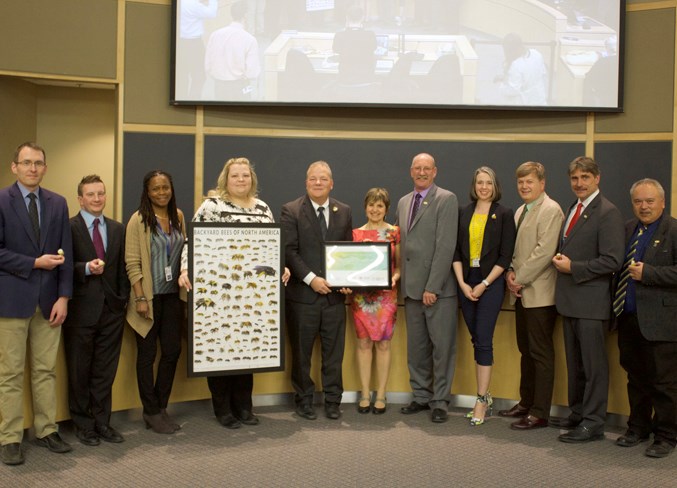 Shelly Candel (centre) presented the City of Airdrie a certificate, poster and handmade pins in recognition of the City’s designation as the 23rd Bee City Canada community.

“We are excited to join the Bee City Canada network, which will provide us with access to workshops, educational resources and webinars on best practices of pollinators,” said Gail Gibeau, senior planner with the City of Airdrie.

The application highlighted recent projects in the community, including the creation and maintenance of numerous pollinator areas in local parks, an ongoing urban beekeeping pilot project, an integrated pest management plan and the creation of community orchards, which provide habitats to native pollinators.

At the meeting, Shelly Candel, director of Bee City Canada, presented City council with a certificate recognizing Airdrie as a Bee City, along with handmade felt bee pins and a poster of local native species.

Bee City’s, Candel said, are dedicated to conservation and undertake a number of activities such as education campaigns, planting pollinator habitats and celebrating bees.

“This is exciting to be able to present to Mayor Brown and the other City councillors the declaration that Airdrie is now a Bee City, a city committed to protecting all pollinators and, especially, the beloved bee,” Candel said. “There are over 200 species of bees in Airdrie that need your help. Please plant your home gardens with pollinators in mind this spring.”

Airdrie is only the second community to receive the designation in Alberta, Candel said.

According to a press release issued following the meeting, City staff has convened as part of an ongoing Pollinator Working Group (PWG) since the beginning of the year.

Staff’s report noted “the newly created PWG will be tasked with helping the City to fulfill some of the commitments as a Bee City Canada Community. The PWG will work in collaboration with the City of Airdrie to provide City-approved educational experiences and community stewardship activities relating to native pollinators and their habitat.”

Gibeau noted the City is continuing to recruit six community representatives for the working group.

She added Bee City Canada recently implemented an annual membership fee based on population size, and will be required to pay a $400 annual fee beginning January 2020 to keep the Bee City Canada designation.

“One-third of our produce section in our supermarkets would be completely gone without bees,” Mayor Peter Brown said. “If that isn’t scary, it should be. I’m very excited about this.”