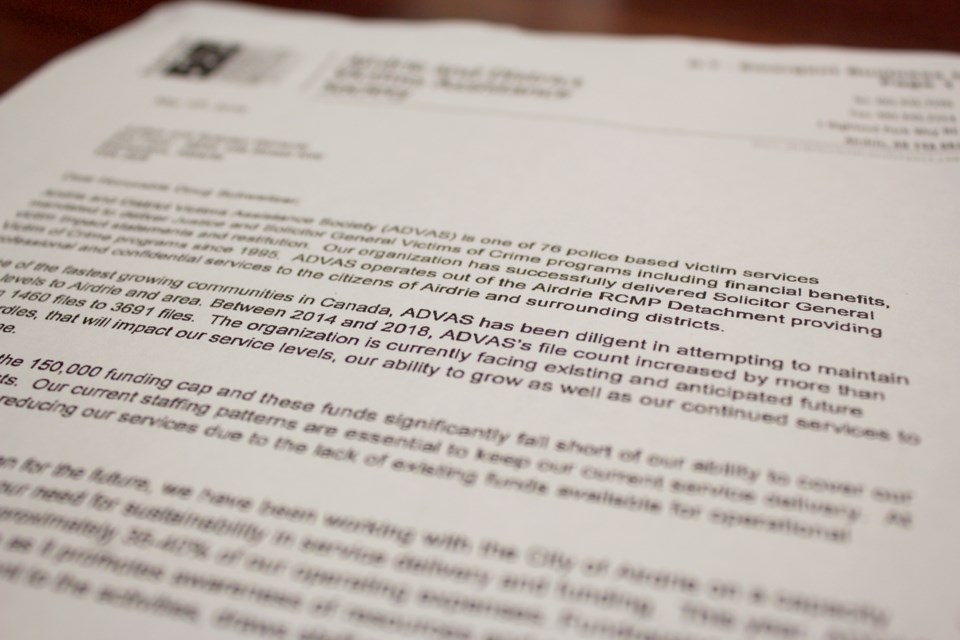 Airdrie and District Victims Assistance Society sent a letter to the Ministry of Justice and Solicitor General at the end of May, requesting additional funding. Photo by Ben Sherick/Rocky View Publishing

An increased number of files and growing financial challenges has led the Airdrie and District Victims Assistance Society (ADVAS) to request additional funding from the provincial government.

“Organizations such as ourselves and other non-profits are really struggling to be able to fundraise and be successful and to continue to operate,” Wagner said. “As the city of Airdrie continues to grow and we’re getting more and more citizens, it’s become challenging for us to be able to continue to meet those service demands.”

ADVAS receives some funding from Alberta’s Ministry of Justice and Solicitor General, but Wagner said it hit a funding cap of $150,000 a few years ago.

This year, Wagner said, the organization needs to raise capital to cover between 35 to 40 per cent of its operating budget of $365,000. She said fundraising is a vital component of any non-profit group, as it both builds awareness about the organization and provides an opportunity for people to contribute to its work.

However, the amount of fundraising ADVAS must now do to continue operating draws the organization’s focus away from its mandate of supporting local victims of crime, she added.

“It becomes a struggle for us to be able to divvy up all the work appropriately, because fundraising does need to take such a frontline, rather than a couple of events here and there,” she said.

With those challenges in mind, ADVAS sent a letter to Minister of Justice and Solicitor General Doug Schweitzer at the end of May outlining the society’s needs and requesting an additional $75,000. The letter was signed by Wagner as well as ADVAS Board Chair Patti Read, Mayor Peter Brown, Crossfield Mayor Jo Tennant, Rocky View County Reeve Greg Boehlke and Officer in Charge of Airdrie RCMP Insp. Kim Pasloske.

“Our current staffing patterns are essential to keep our current service delivery,” the letter read. “At this juncture, we face reducing our services due to the lack of existing funds available for operational expenses.”

So far, the organization has not received a response, but Wagner said she is “very hopeful and will continue to be optimistic with regards to Justice and Solicitor General continuing to support victim services.”

“What we’re hoping to achieve is that it will really be able to buy us some time back for this year,” Wagner said.

In the meantime, she said, ADVAS is exploring additional funding streams, but noted there are limits to what the organization can apply for.

“While there’s a multitude of different avenues to be able to receive some of those funds, because we’re looking for operating dollars, a lot of our requests don’t qualify within the parameters of some of those grants,” Wagner said.

She added, as a charitable organization, ADVAS is able to pursue large donations from local organizations.

“The board and I work very closely together with looking for different fundraising opportunities and different avenues and partnerships in the community that we can potentially create to help increase some of those funds that we’re looking for,” she said.

While the organization waits for a response to its funding request, Wagner noted ADVAS is also working with the City of Airdrie on a capacity-building project.

“That’s really highlighted the need for us to be proactive and plan as much as possible, so we’re continuing to be successful in the future and that we have all of the things we need in order to continue to do our work,” she said.

She added, regardless of the outcome, she is confident ADVAS will continue to be supported by the community in order to successfully carry out its mission.