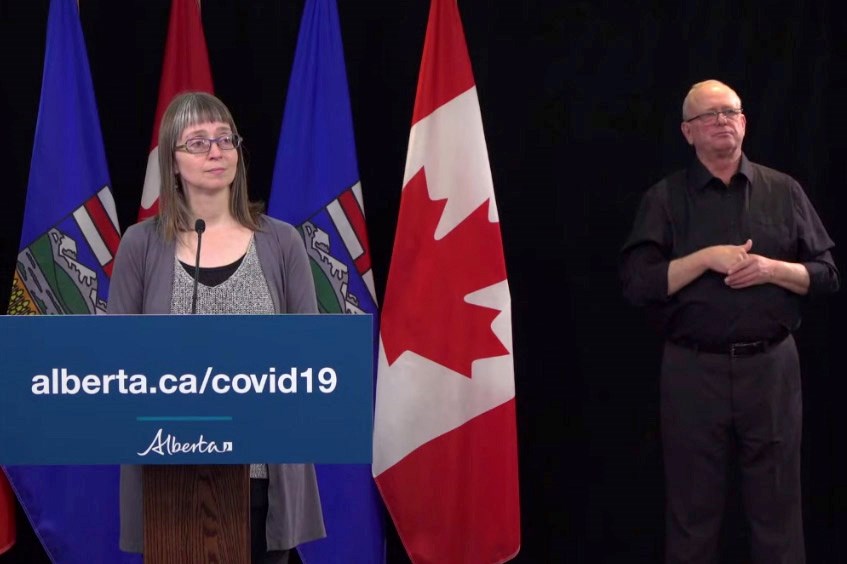 Dr. Deena Hinshaw, Alberta's chief medical officer of health, provides the latest numbers and protocols during her daily COVID-19 update on Thursday, April 2. (Image is a screen capture from the media conference.)

There are now 968 Albertans who have been diagnosed with COVID-19, a rise of 96 since yesterday, Dr. Deena Hinshaw reported during her daily news briefing. Speaking from the press room in the Federal Building, she remarked how the Alberta lab is progressing through the analysis of thousands of tests since it recently replenished its supply of a necessary reagent.

“I am also pleased to note that we conducted more than 4,000 tests in the last 24 hours, as our lab continues to work at maximum capacity of these tests, approximately 98 per cent came back negative, similar to previous days,” she said.

Of the nearly 1,000 people who were confirmed to have contracted the disease, 174 have now recovered, including 32 in the last day alone. Hinshaw said 108 of the total cases were suspected community transmissions.

She also reported there have been two additional deaths, bringing the provincial total now to 13. One of these occurred at the beleaguered McKenzie Towne Continuing Care Centre in Calgary and another in the North Zone.

“We now have 74 confirmed cases of COVID-19 in continuing care facilities, and I expect that more will be confirmed in the coming days,” she continued, noting that figure included 65 at the McKenzie Towne facility alone.

“As of today, there are nine outbreaks at continuing care facilities across the province. These outbreaks are a precaution based on staff positive testing.”

She has issued new standards that operators and staff members of these facilities must follow. Those standards, enforceable by law, include notification public health authorities of any suspected or confirmed case.

There are 22 cases of COVID-19 reported in St. Albert.

About the Author: Scott Hayes