Qs with the View: Stew Ward talks beer and Balzac

Starting this May, the Airdrie City View is introducing some new monthly features, including Qs with the View with Scott Strasser – a monthly Q&A series. This new series will feature informal interviews with long-time local residents, business owners, charity directors, coaches and more.

Scott Strasser
May 27, 2021 4:00 PM
Previous Next
Stew Ward co-opened the Balzac Craft Brewing Company in Airdrie in 2018, after working in the oil and gas sector for many years.Scott Strasser/Airdrie City View
Expand

Starting this May, the Airdrie City View is introducing some new monthly features, including Qs with the View – a monthly Q&A series conducted by editor Scott Strasser. This new series will feature informal interviews with long-time local residents, business owners, charity directors, coaches and more.

If you have a suggestion for interview subjects for future Qs with the View, please email sstrasser@airdrie.greatwest.ca

Our first Q&A is with Stew Ward, the co-owner of the Balzac Craft Brewing Company and a professional golf instructor at Collicutt Sidings Golf Course in Crossfield.

City View: How long have you lived in Airdrie?

Ward: We lived in Balzac since 1988, so for 30 years, roughly. Then we sold our property in Balzac and moved to Airdrie about three years ago.

City View: And that was to start the brewery?

Ward: Yes and no. It was time to move on from the acreage.

City View: What motivated you to open a micro-brewery?

Ward: It was something we had talked about doing four or five years ago. It was mainly our son and myself, who discussed that it would probably be a good idea to do something like this. We just decided we would see the feasibility of starting it up.

I was still working in the oil and gas sector at a time, and was working on a contract out of Colorado. We decided when that contract was up, there wasn't anything going on with the oil and gas industry, at least for my services, so I decided it was maybe time to call it a career and do something else. This is basically my second career.

City View: What interested you about the brewing industry?

Ward: Just the idea of making beer. It's a product that people really like. It's not so much about the beer, but also the venue, because we had initially started doing our research for places in Texas, Colorado, California, Alberta and B.C.

We just decided the model that everyone was going with, which is the larger vessels and production-style brewery, was not what we wanted to do. When we finally settled on the venue we wanted to do this in, it was more about creating the pub as opposed to just brewing beer. It also has to do with my experiences in Scotland and England. The old-style pubs and atmosphere they create, and a sense of community, I wanted to start that here.

To do the style of brewery we wanted wasn't going to be an option in Balzac. We looked for a property in Balzac and a warehouse there wasn't going to work out, so when we decided on this particular property, it became not just about the brewing of the beer but developing the pub atmosphere.

We were basically brewing in a barn and trying out various beers. We decided we wanted to move and sell the property, so we moved into Airdrie. It became one of those things where we said, 'let's look at some venues.' It took us a year just to find the property we wanted to do this in. 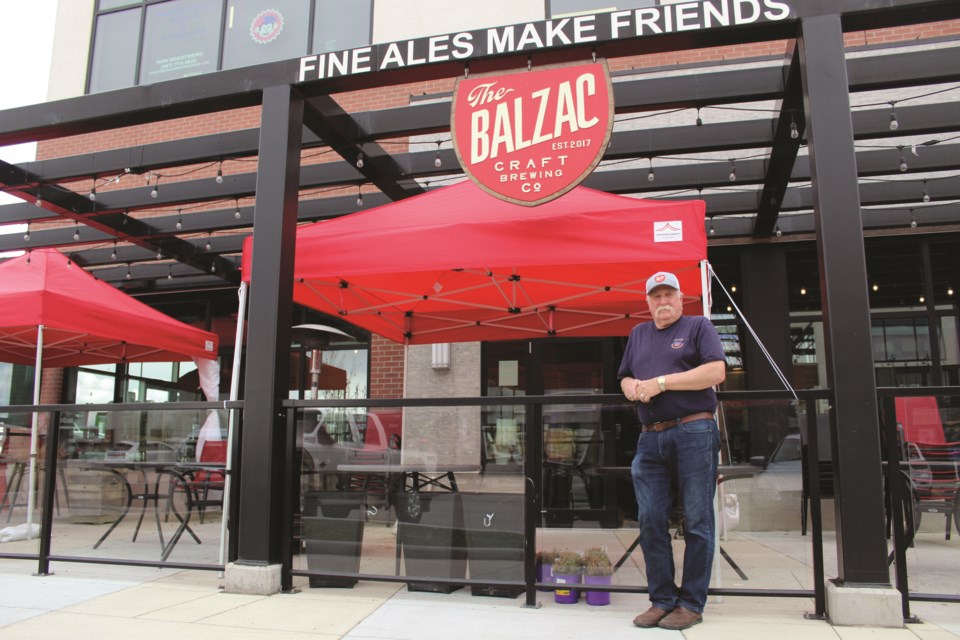 Stew Ward poses outside the Balzac Craft Brewing Company's patio on a mild May afternoon. By Scott Strasser/Airdrie City View

City View: Balzac Brewing is the third micro-brewery to open in Airdrie. What do you think of the demand for craft beer and the industry's viability in Airdrie?

Ward: It rapidly convinced me, the need for something like this was paramount. Our model is a little bit different, in the sense most of our product is based on English-style ales. We do venture outside that, but we wanted to make really good-quality English-style ales and go against the grain of the North American craze on really hoppy IPAs.

We just felt, we wanted people to come in and have a pint, so it just made more sense to brew something that was more taste-friendly, if you will. I find the English-style ales tend to be that way. That's basically the style we had that appeals to the people who come here, because our venue is different from the others. We have a lot of people come in, including a large contingency of British people, who really like our style of ales. We have put out some North American styles, and they've been OK, but we find people will gravitate back to the ones they really like, which is the milder one with less alcohol content and hops.

I think people are tired of just having the North American norms – the Buds and Coors. There's a cry-out for, 'Give us something that tastes good.' The fact we've been able to brew very good beer – and that's not coming just from me but our patrons – tells us we need to have venues like this. They were certainly long overdue. It's rapidly become one of those situations where it has become a community gathering point, because we're dog-friendly and kid-friendly.

City View: What is it like to operate a brewery, after working for so long in oil and gas? They seem like two different worlds.

Ward: In some cases, it's just business. It really isn't that much different. Getting up and having something to do is the point, more than anything else. They call me the Renaissance Man because there are so many other things I do. I'm also a golf professional and teach golf out of Crossfield.

There are a few other things that I've done that always keep me busy. Really, it's just another career and something to look forward to when I get up in the morning. The brewery just happens to be my focal point right now. It's very busy – it serves a bigger purpose for us.

Basically, I don't want to retire.