A View to the Past: Nose Creek Bridge connects Airdrie to its history

Since I was young, I’ve always been a big history buff. I oftentimes find myself getting lost in historical documentaries, film and books, with the subject matter spanning from ancient to more modern history.
May 27, 2021 1:00 PM By: Carmen Cundy
Previous Next
The Nose Creek Bridge is Airdrie's first Municipal Historic Resource. After a restoration project in 2020, it was recently reopened to foot traffic and cyclists.Carmen Cundy/Airdrie City View
Expand

Since I was young, I’ve always been a big history buff. I oftentimes find myself getting lost in historical documentaries, film and books, with the subject matter spanning from ancient to more modern history.

But I have to admit I’ve been completely blind to the history that is right under my nose.

When I discovered the Nose Creek Bridge to the Elevators – the City of Airdrie’s first Municipal Historic Resource – is almost 100 years old, I couldn’t believe it. I knew that Airdrie had a history going back to early settler-times, but I had assumed most of the relics from back then had been replaced or destroyed over the years, as Airdrie developed from a small village into a bustling city. I wondered, if that bridge could be almost a century old, what other significant landmarks and stories are waiting to be re-discovered?

You might be thinking, ‘Well, what’s so special about a bridge?’ But this isn’t just any old bridge.

Built in 1928, the Nose Creek Bridge, which crosses the creek just north of Railway Avenue, holds both historical and architectural significance. The bridge is one of the only surviving symbols of Airdrie’s agricultural beginnings in the early 20th century.

While the bridge is officially titled the Nose Creek Bridge to the Elevators, it has gone by other names, including the Elevators Bridge, Edwards Way Bridge, Pony Truss Bridge and the Beer Bridge.

The 80-foot pony truss bridge, which is set on wood abutments, is an example of a unique design characterized by early bridge construction practices in Alberta. But it is also a rare example of a bridge not located on a working road allowance, and it is often called “The Bridge to Nowhere.”

While the area surrounding the bridge is now filled with green space, parks and pathways, it was originally intended to be Airdrie’s downtown core, as part of the intention that “all roads lead to the station." Early settlers intended the railway, station and associated buildings to make up the heart of a railway town.

Airdrie’s development didn’t work out quite as planned and Main Street, the core of our downtown, is now a separate location within the city. 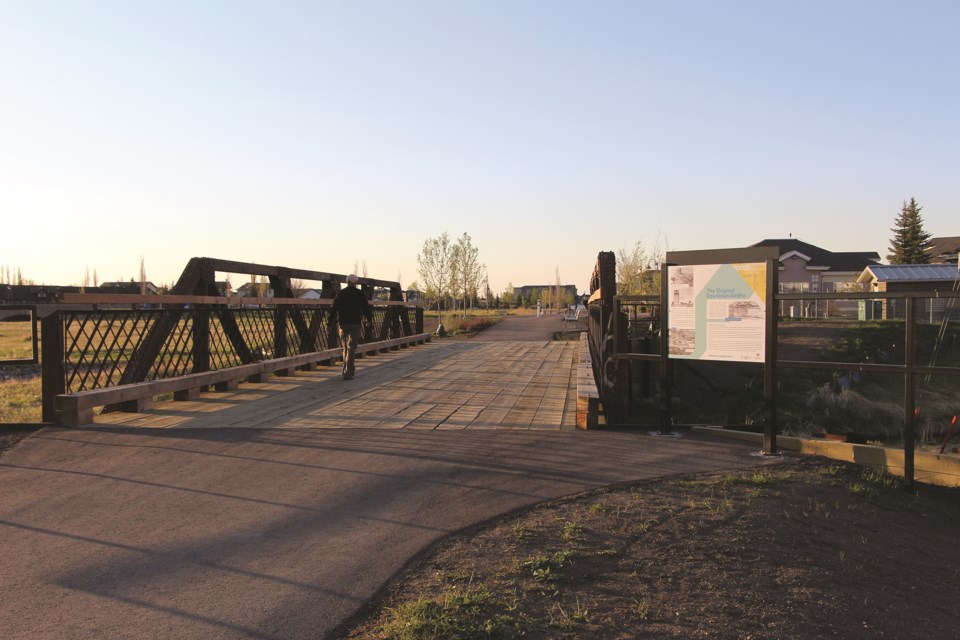 A pedestrian is seen walking across the Nose Creek Bridge to the Elevators on a recent Friday evening. . By Carmen Cundy/Airdrie City View

While the Nose Creek Bridge to the Elevators may not be the focal point of the city, the bridge signifies the emergence of Airdrie as a major grain-handling point during the 1920s – a time that saw a rapid increase in grain production. It once served as an important access point to the old grain elevators that stood at the station grounds, which were built one year later in 1929, just southeast of the bridge.

The bridge also reflected the need to build infrastructure, roads and bridges that could keep pace with settlement in the area. This was a time of huge growth for the prairie communities across the province. It also reflected the growing importance of mixed commercial farming in Alberta at that time. According to the Alberta Register of Historic Places, “the scale and sophistication of the design, expertise of construction and workmanship, the quality of the superstructure materials, and the serial replacement of the substructure wooden abutments as part of the structural history of the bridge, is indicative of its envisioned continuous importance.”

The bridge continued to serve as a roadway connecting the north and south sides of Airdrie until 1983, when it was closed to vehicular traffic. By the late 1980s, the reservoir had been filled in, the elevators closed and the road west from the south siding was removed. The demolition of the last two Alberta Wheat Pool elevators marked the end of an era. The Nose Creek Bridge is now the last remaining structure associated with the railway station grounds and the former grain elevators in Airdrie.

Nose Creek Bridge’s importance as a historical landmark was only just recently recognized by the City of Airdrie. In July 2019, after several years of deliberation, City council passed a bylaw protecting the bridge as Airdrie’s first Municipal Historic Resource.

A full restoration project was launched just over a year ago that aimed to bring back the original character of the pony truss design after a fire in 2015 had damaged much of the wood at the south end of the bridge. Beginning in May 2020, the bridge underwent significant rehabilitation, and the project was officially completed in October 2020, with a ribbon cutting ceremony held on Oct. 29 to reopen the bridge to pedestrians.

Today, the Nose Creek Bridge to the Elevators is one of few remaining historic landmarks in Airdrie. That means there is an increased importance in preserving these historic sites for future generations. Historic resources provide us a glimpse into the past, and can help provide a sense of culture and identity for a community.

Many of the buildings and infrastructure of Airdrie’s agricultural and historical beginnings are gone, but that doesn’t mean the people and the history should be forgotten. In fact, it creates a sense of urgency to delve deeper into the past and to shed light on these forgotten stories for those who will come after us.

With the launch of this monthly history column – A View to the Past – I cannot wait to dig deeper into the history of Airdrie and the surrounding Nose Creek area in order to give our readers a greater sense of the place we call home.