Soundtrack City: How Nashville is awash in film, game scores 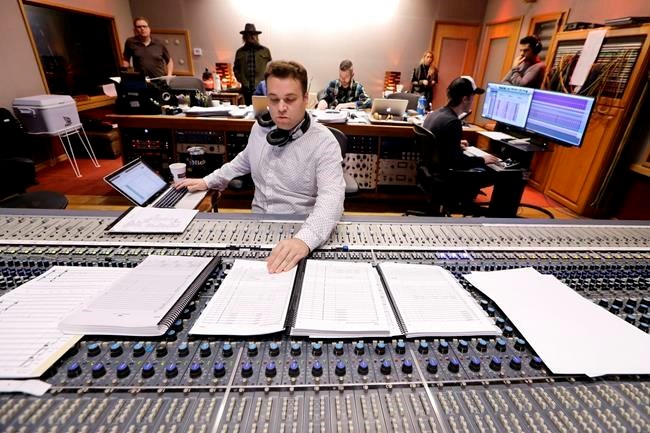 Nashville is already known as Music City, but a new wave of music being recorded there for video games, TV shows and movies could earn it a new title as Soundtrack City.

The city has a reputation for high quality studio musicians that can play just about any genre, including country, pop, rock, gospel and more. Nashville musicians have also been behind the soundtracks for some of the biggest video game franchises including “Madden,” “FIFA,” “Call of Duty” and “Star Wars.”

And more production companies have been bringing their film and TV soundtrack recordings to Nashville, including Netflix, Showtime, Sony and Focus Features, thanks in part to an incentive program enacted into law in last year.

“Nashville has become one of the two or three major places to record in the world for film, game and television,” said Steve Schnur, president of music for Electronic Arts, the popular video game company.

Schnur's background includes working at MTV and record labels such as Arista and also working as a music supervisor on films prior to joining EA. He's been a sort of Pied Piper for soundtrack recording in Nashville. “I’ve been preaching Nashville for quite some time and initially it was met with a little cynicism,” he said. “Nashville? Don’t they make country records there?”

For a long time, EA recorded soundtracks for their games with orchestras in Los Angeles, London and eastern Europe. That changed about seven years ago when Schnur came to Nashville to record music for a trailer for a game called “Dragon’s Age Inquisition.”

“It was like the world’s greatest band,” Schnur said of the 60-member orchestra assembled for the recording. “It really supported what Nashville is: a collaborative place.”

Even more so, Nashville’s musicians were both fast and accurate, even on complicated scores written by acclaimed composers such as Hans Zimmer, Lorne Balfe, Jeff Russo and John Debney.

“This is a first-take town,” said Schnur. “You go to Prague, you’re doing six or seven takes.”

Now, Schnur estimates 90 to 95% of EA's scores are being recorded in Nashville, with the rest recorded in London.

The music of video games often is integral to the gameplay in creating both emotion and attachment to the characters and storyline. Kris Bowers, the composer and pianist behind the Oscar-winning film “Green Book,” came to Ocean Way Nashville Recording Studios to record the soundtrack for “Madden NFL 20.”

Bowers said he can still recall exactly the music of the games he played as a child, such as “GoldenEye 007” on Nintendo 64 or “Super Smash Bros." and “Zelda.”

“I think the music immediately connects you, especially when there are strong themes or these melodies that you can’t forget. It’s the same thing as hearing a John Williams score. You hear it and you’re immediately transported to your childhood," Bowers said.

Bowers also explained that because video games are non-linear, meaning the player's decisions can take the game in different directions, he had to compose music in a totally different way than he does for films or TV.

“For each of these different endings or different iterations of the storyline, or the way that it branches out, there will be a different piece of score," Bowers said. "For myself, thinking as more of a film composer, how do I make each branch feel similar, like they are related, but obviously matching the emotional tone of the story at that moment?”

That also means a lot more music to record compared to a feature film. Schnur said video game scores can range between an hour to 300 minutes of recorded music.

Bob Raines, executive director of the Tennessee Entertainment Commission, said that when Tennessee has to compete with states like Georgia and Louisiana for film and TV production, music production was their competitive advantage.

In just six months, they brought five new musical scoring projects to Tennessee that likely would have gone to eastern Europe, with companies such as Netflix, Showtime Networks, Focus Features, Sony and EA, Raines said.

“We have a legacy of music as a state brand so it was easy to promote,” said Raines.

Schnur said now the problem isn't bringing projects to Nashville, it's finding the studio space and time to record them.

“Nobody second guesses coming to Nashville," said Schnur. "The only question now is there’s not enough space and we need more.”