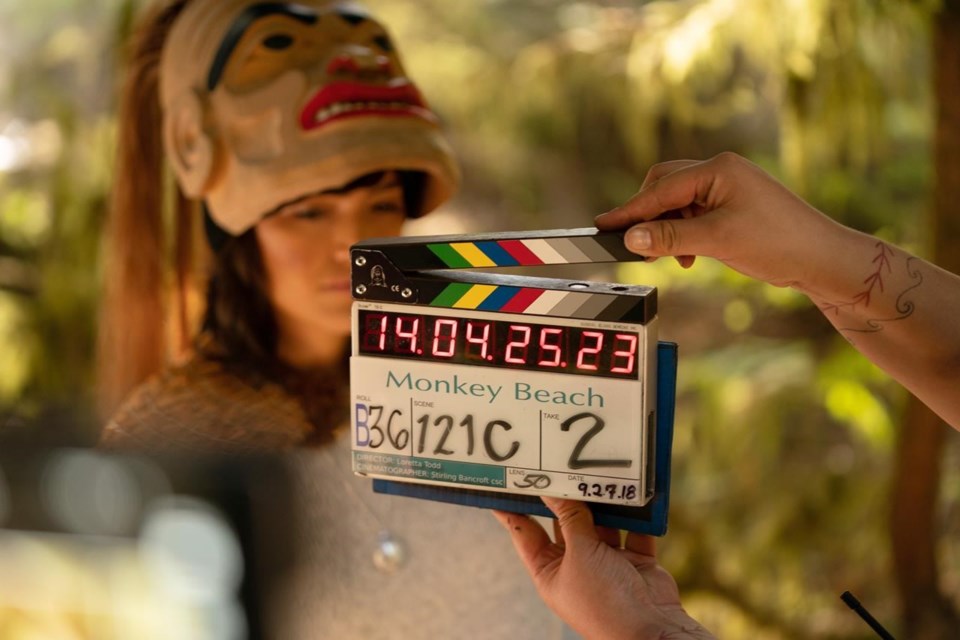 A boat passes and a figure plunges into the water as blood swirls around, hinting at the mystery at the centre of Monkey Beach, an adaptation of the 2000 book by Haisla author Eden Robinson.

The scene cuts to an East Vancouver apartment, where the film's protagonist, a young woman named Lisa, wakes up after a night of partying in the city she says she's been hiding in for too long.

She's greeted reproachfully by a woman from Lisa's past, who compels her to go home to Kitimat, B.C., to be with her family and her brother, Jimmy, before evaporating from the screen.

Filmed around Kitimat, south of Prince Rupert, Monkey Beach melds Haisla culture, spirituality and supernatural forces as Lisa reconnects with her community and comes to terms with a special gift.

Actor Grace Dove said she relates to her character when it comes to leaving home and struggling to navigate identity while adapting to life in the city.

"I know that in my real life," said Dove, who is Secwepemc from B.C.'s southern interior but grew up in Prince George.

"I need to always go home a couple times a year and feel the ground under my feet and reconnect to where I'm from."

Dove, who also starred in "The Revenant," said she's always had her sights set on a role like Lisa.

It's the first time she's led a film directed by an Indigenous woman, Dove added.

She said Monkey Beach "shows young people that even in a modern world it's safe and it's okay to be able to connect to our spiritual ways, because that's what's made us resilient and helped us survive generations of violence."

Lisa has been seeing strange characters since childhood — the ghosts of loved ones who died, as well as b'gwus, or sasquatch — that lend her what director Loretta Todd calls "double vision."

It's like stepping through time, said Todd, who describes the style of the film as "magical realism."

Lisa's family struggles to accept her gift, especially when she raises alarms about her brother.

As she sets out in search of answers, Lisa confronts ominous, otherworldly forces while embracing guidance from the spirits of relatives and ancestors and reckoning with her own identity.

Haisla people have a long cultural history at Monkey Beach, located about 2.5 hours from Kitimat by boat, including stories of b'gwus coming down from the mountains to visit the coast, noted Todd, who is Cree and Metis and resides in B.C. on Coast Salish territory.

"Every person who lives on Indigenous land has to recognize that this is not empty land that holds no stories or holds no bones," Todd said.

"I want to find a way in which that beauty and that power that was really inherent within our ceremonies is the medicine that drives my films."

While Monkey Beach is set in the context of colonization and intergenerational trauma wrought by Canada's residential school system, Todd said, its focus is Lisa's power and, by extension, the power of Indigenous women, stories and ceremonies to connect past, present and future.

The film was scored by Jesse Zubot, a frequent collaborator and producer for throat singer Tanya Tagaq, and features music from Snotty Nose Rez Kids, a hip hop duo from Kitimat.

It's set to premier as the opening film at VIFF on Thursday, with in-theatre screenings happening in Vancouver and West Vancouver, Victoria, Whistler, Nelson, Kamloops, Salmon Arm and Terrace.

It's also being screened virtually as the festival adapts to the COVID-19 pandemic, while public health rules are in effect and seating is limited at in-theatre screenings.

This report by The Canadian Press was first published Sept. 21, 2020.

This story was produced with the financial assistance of the Facebook and Canadian Press News Fellowship.