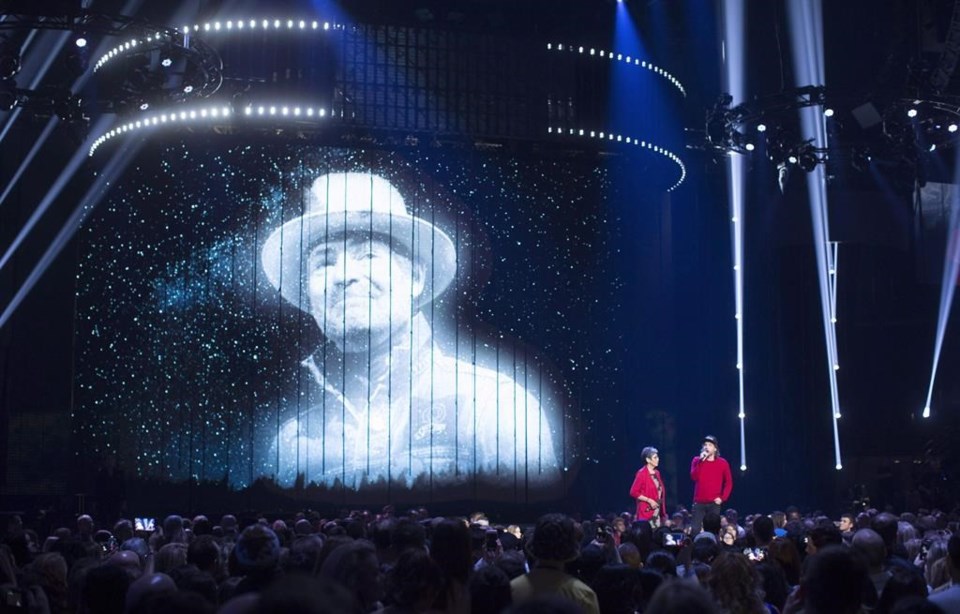 TORONTO — When Patrick Downie listens to the final songs recorded by his late brother, he hears a man who's found peace.

He says Gord Downie always wrote songs to “figure out life's puzzle,” but as the iconic Canadian troubadour faced an incurable form of brain cancer, his younger sibling believes he was sending a goodbye through his music.

“Away is Mine,” released earlier this month, captures that moment in time unlike any of Gord Downie’s earlier work. The recordings were laid down over several days in July 2017 at the Tragically Hip’s famed Bathouse studio in Bath, Ont.

Three months after the tapes stopped rolling, Downie was no longer of this earth.

At 53 years old, he left behind 10 songs that embraced life’s vigour, the connections we make, and the unpredictable beyond that lays ahead.

The double album presents those tracks in fully produced "electric" versions and stripped-down acoustic takes, offering two perspectives on a vibrant period for the artist.

“I think he really trusted what was coming through him,” Patrick Downie said in a recent phone interview.

“This is Gord at topflight — totally unshackled and not having to worry about polishing up the details.”

“Away is Mine” is a bookend to Downie’s legacy, but it’s also a culmination of two years of intense creation that began after he learned of his cancer diagnosis in late 2015.

He started by writing a series of letters to loved ones. Those were set to music during studio sessions in January 2016 and eventually became the album “Introduce Yerself.”

After he publicly acknowledged his cancer diagnosis in May 2016, Downie embarked on the ambitious final Hip tour that summer, and made another run of performances for his Chanie Wenjack album “Secret Path" in the fall. He returned to the studio to add the finishing touches to "Introduce Yerself" in February 2017.

“Away is Mine” follows that period. Downie had slowed his frenetic pace and centred his attention on writing a book, but his brother said he wrestled with the structure of the story.

“He felt writing the book was a little too isolating,” added Josh Finlayson, a long-time friend and collaborator.

“So I would go over every week for a visit... and the idea of writing songs and playing music, always a big part of our relationship, came about.”

Finlayson said they hadn't planned to make a record, but once Downie started recording on his GarageBand music software, it wasn’t long before they were holding a trove of songs. Downie proposed a trip to the Bathouse to record them.

The studio's manager Nyles Spencer engineered the recordings. Others dropped in to contribute, including Downie's eldest son, Louis, on the drums and Travis Good of the Sadies who picked up a few stringed instruments.

Without a structure, Finlayson and Spencer were given room to maneuver with their own ideas.

“At the end of the four days, as Nyles was mixing everything down, I said: 'Can you spit out an acoustic version? Just my guitar and Gord’s voice?'" Finlayson remembers.

“I wanted it as a document of what the two of us had done.”

Those acoustic takes ended up being more than a keepsake, but something to share with the world. They added further texture to Downie’s voice and otherworldly energy at the time, a blast of light that Finlayson hoped wouldn’t dim as quickly as it did.

“When you're watching people go through this, and they're accomplishing all these things, in the back of your mind part of you is going: ‘Is he the one who defies this?’" Finlayson said of the cancer fight.

“It's hard not to hang onto that hope."

When Downie died on Oct. 17, 2017 the recordings were finished, but the album wasn’t named. Neither was the final track. “Untitled” closes the album with Downie reflecting on the meaning of a farewell.

But “Away is Mine” won’t be the last we hear of Downie’s voice, his brother assured, because there’s an array of past recordings sitting in the vaults

Before his death, the singer collaborated with a number of his “muses,” as Patrick Downie puts it, including indie rockers the Dinner is Ruined. There’s also the possibility of reissues and a solo album with producer Bob Rock that’s been in gestation for the better part of a decade.

“We were listening to mixes all the way up to the end,” Patrick Downie said. “It's all in progress.”

He also expects that unfinished book will see the light of day.

Until then, he hopes others find a familiar solace in Downie's words on “Away is Mine.”

“I feel really grateful that I have this,” Patrick Downie said.

“In many ways, it's what keeps him close and keeps him alive for me.”

This report by The Canadian Press was first published Oct. 22, 2020.