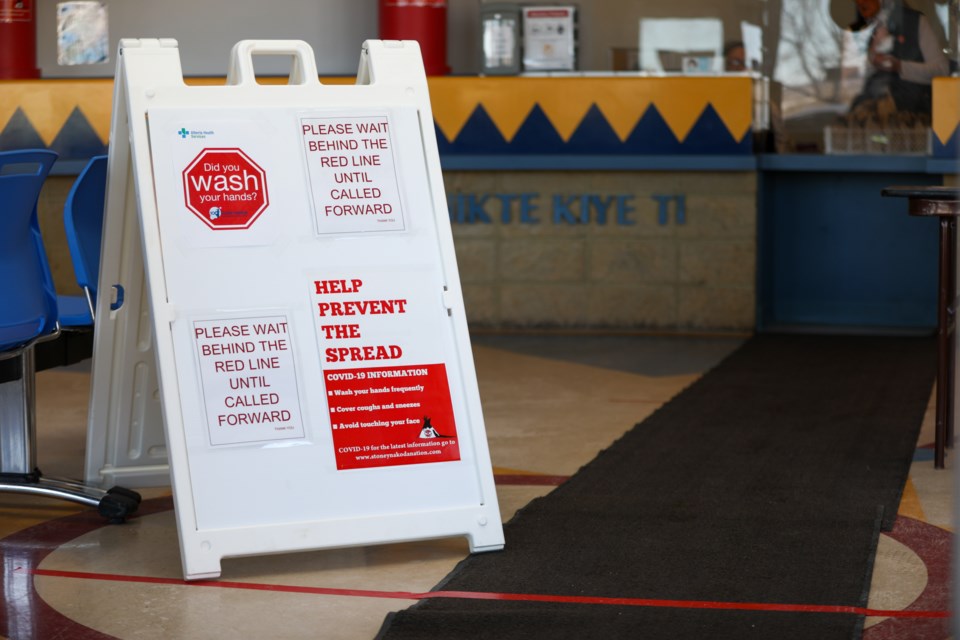 A sign in the entrance of the Stoney Nakoda Health Centre notifies patrons about the risks of COVID-19 on Thursday (March 26). EVAN BUHLER RMO PHOTO⁠

STONEY NAKODA – The Municipal District of Bighorn, which includes Stoney Nakoda First Nation, is the No. 1 COVID-19 hotspot in Alberta, while the Town of Canmore has the lowest per capita case count in the province with one active case.

With a per capita case count of 1,649 per 100,000 in the MD, Nakoda Emergency Management indicates the current transmission risk in Morley is high, with a total of 101 active cases currently being managed by Stoney Health Services as of Tuesday (june 15).

In the last week, new cases continued to be diagnosed each day, with an additional 25 new cases reported on Monday (June 14) but only one new case on Tuesday (June 15).

All residents are being encouraged to get tested and follow quarantine guidelines if they are a close contact.

“If you’re COVID-19 positive, please follow the mandatory 10-day isolation. Stay away from others in your home,” according to a Nakoda Emergency Management.

“It is up to all of us to help stop the spread. Stay home and stay safe.”

There have been several tragic incidents on the Stoney Nakoda First Nation in recent times, including the stabbing death of a 19-year-old man on June 2.

The community also came together for gatherings to mourn and honour the 215 children found in a mass grave near the former Kamloops Residential School.

Stoney Health Services is making a big push to encourage vaccination of residents.

There is a vaccination clinic on June 17 at Stoney Health Centre from 11 a.m. to 5 p.m., with Canadian Olympic champions Clara Hughes and Beckie Scott making appearances and signing autographs.

In addition, there will be door prizes such as NHL jerseys, Olympic mittens and T-shirts plus every youth aged 12-17 who gets a shot, or provides proof of vaccination, will get a free This is Our Shot T-shirt, with special Stoney translation.

“With every vaccine given, we are one step closer to protecting our communities, reducing the stress on our health-care system and enjoying more of the things we love in life,” according to Stoney Health Services.

In neigbouring Canmore where there was only one listed active cases on Tuesday (June 15), Alberta Health Services had listed the municipality as having the lowest per capita active case count in the province of six per 100,000 people.

There have been a total of 443 cases since the pandemic began in Canmore, including 440 recoveries and two deaths.

In Banff and Lake Louise, which has gone from the COVID-19 capital in Alberta at the end of April to one of the lowest in the province, had just two active cases on June 15, a 93 per cent decrease in active cases since the peak on April 25. That now puts Banff's per capita case rate at 14.9 per cent per 100,000 people.

There have been a total of 806 cases since the pandemic started, including 803 recoveries and one death.

Based on a population of 9,500 people in Banff and Lake Louise, Town of Banff officials estimate the the first dose vaccination rate is 93 per cent, with 13 per cent of residents having had both doses so far.

Silvio Adamo, the director of emergency management for the Town of Banff, thanked the community for stepping up to get vaccinated.

“We have a lot of opportunity for vaccination in our community and in our valley,” he said, noting Alberta Health Services has added two more mass vaccination clinics at the Fenlands recreation centre on July 5 and 6.

“We encourage all our residents to book their second doses as soon as they are eligible so that we can have a safe and healthy summer.”

Adamo said he is pleased to share with the community that there is no longer anyone with COVID or a close contact at any of the three isolation facilities that were set up in Banff.

Future of Métis National Council uncertain as Manitoba Federation gets mandate to pull out
Jul 26, 2021 9:45 AM