The Langdon Community Campus quad baseball diamond project is moving along, and Chrissy Craig, with the North Bow Community Facility Board (NBCFB), filled in Rocky View County’s (RVC) Policy & Procedures Committee (PPC) on the status of the project a
Mar 27, 2018 12:00 AM By: Ben Sherick 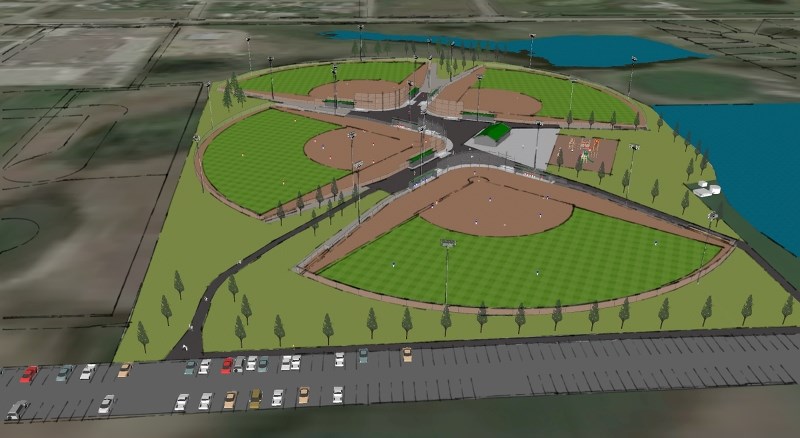 A 3D rendering of the planned Langdon Community Campus, including the quad baseball diamond project. The project is currently in the fundraising stage.

The Langdon Community Campus quad baseball diamond project is moving along, and Chrissy Craig, with the North Bow Community Facility Board (NBCFB), filled in Rocky View County’s (RVC) Policy & Procedures Committee (PPC) on the status of the project at its March 6 meeting.

A 3D rendering of the planned site was presented, showcasing the four identical baseball diamonds planned for the campus, as well as the future recreational facility. A high school will also eventually be built on the site.

With detailed design and engineering complete, the project is now in the fundraising stage.

“Right now, we are on track to hit our target dates for this fundraising,” Craig told PPC. “This project is moving forward, we’re gaining steam.”

Craig said the project is estimated to cost approximately $3.4 million. NBCFB will seek to raise $1.1 million from the private sector, with $2.2 million coming from government funding.

Craig said funds have also started to come in from the private sector.

“We have the ball rolling. We’re about 10 per cent towards the funds we need. We’re not quite there, but we actually have funds rolling in and we have commitments coming in,” she said.

Once fundraising is complete, the project can move to the final stage. Craig said a project management company will be hired within the next two months, and the aim is to begin construction in spring 2019.

“Once we get the fundraising portion done and we get the majority of the money, then we are going to be building,” Craig said. “Our goal is to be able to play the first pitch on the field in the fall of 2019.”

While progress is being made on the baseball diamonds, Craig told PPC no decision has been made about what the recreation centre will include. However, the community has given a list of desired amenities and NBCFB will sit down with Alberta Culture to discuss the recreation centre.

“We’ve engaged them to be a third party to help us, as a community, decide what we want in this rec centre, so that will be decided in the next month,” Craig told PPC.

Craig said NBCFB should also know the status of the future high school by the end of March. The Langdon high school is currently at the top of Alberta Education’s priority list, but, as of press time, it remains to be seen if the school has funding from the province. That will be known once the provincial budget is released.

Construction of the high school will begin as soon as funding comes in.