The Rocky Mountain Symphony Orchestra’s (RMSO) 33rd concert will be its first at its new venue, when the orchestra performs A Celebration of Spring March 22 at the Polaris Centre for the Performing Arts in East Balzac.
Mar 14, 2019 12:01 AM By: Scott Strasser 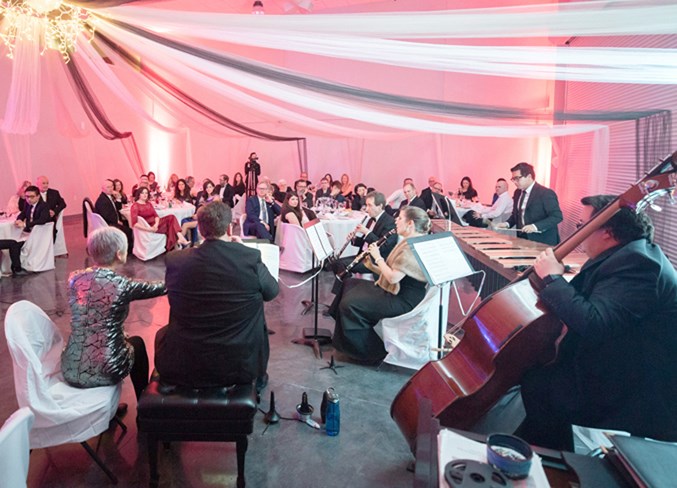 Members of the Rocky Mountain Symphony Orchestra will perform their first concert in their new space at the Polaris Centre for the Performing Arts March 22.

The Rocky Mountain Symphony Orchestra’s (RMSO) 33rd concert will be its first at its new venue, when the orchestra performs A Celebration of Spring March 22 at the Polaris Centre for the Performing Arts in East Balzac. RMSO Music Director Carlos Foggin said the audience can expect an intimate concert from the 45-member orchestra, which formed in June 2016 and features an ensemble of professional and talented amateur musicians from throughout southern Alberta. “No one is going to be farther than 40 feet from the performance, which is different than what you’d expect a concert like this to be,” said Foggin, who will act as the concert’s conductor. “Also, they can expect a great performance – the orchestra has been written up many times for excellent musicianship. Spruce Meadows trusts us with their shows, and we’ve played for Cirque du Soleil. It’s not just a community group, but a really top-notch musical organization.” The orchestra’s program will feature four selections from notable European composers, including Johan Strauss II, Reinhold Glière, Amadeus Mozart and Robert Schumann. One of the highlights of the night, Foggin said, will be the singing of lyric coloratura Nansee Hughes, a well-known figure in Canadian classical music. Her voice will be featured during the concert’s first two selections – Strauss II’s Frühlingsstimmen (A Voice of Spring) Waltz and Glière’s Concerto for Coloratura Soprano. “She’ll be singing two pieces that are very rarely performed, partly because you need a soprano of that caliber to do it and there aren’t that many around,” Foggin said. “She’ll be singing some of the highest notes ever written for orchestra. This is something you don’t see in North America, ever. These pieces are performed in Europe regularly, but not here.” Another star of the evening will be Calgary-based solo pianist Magdalena von Eccher, who will play Mozart’s 20th Piano Concerto in D Minor. It’s a piece Foggin believes many audience members will recognize. “It’s another famous piece, and in lots of movies,” he said. “It was featured in Amadeus and other films.” In keeping with the seasonal theme, the orchestra will round out the 80-minute performance with Schumann’s Symphony #1, a Symphony of Spring. While many people may have negative ideas about classical music, Foggin said, such opinions often disappear after they witness a classical orchestra perform for the first time. “We have a pre-conceived notion about classical music, like a lot of people might have pre-conceived notions about blue cheese or a steak with some pink in it,” he said. “But we’re surrounded by it. All these great movie soundtracks from the last 50 to 100 years all use an orchestra. “It evokes emotion in us, it moves us and it’s what we remember from these movies and these soundtracks. I think most of the people who don’t think they would like it are some of our biggest returning patrons.” Tickets for A Celebration of Spring are $5 for children under 12, $15 for students aged 12 to 17 and $35 for adults, with premium seating and VIP options for $50. Tickets can be purchased at rockymountainsymphony.ca Foggin said there are many reasons for Airdrie residents to come check out the RMSO’s first performance at the Polaris Centre, whether it’s for their first symphony or their hundredth. “You can expect a really welcoming and casual atmosphere, but top-notch stuff,” he said.