Anyone looking for a history lesson from more than 250 million years ago would normally need to travel to Drumheller to see the numerous fossils on display.
Jun 1, 2010 12:00 AM By: Airdrie Today Staff 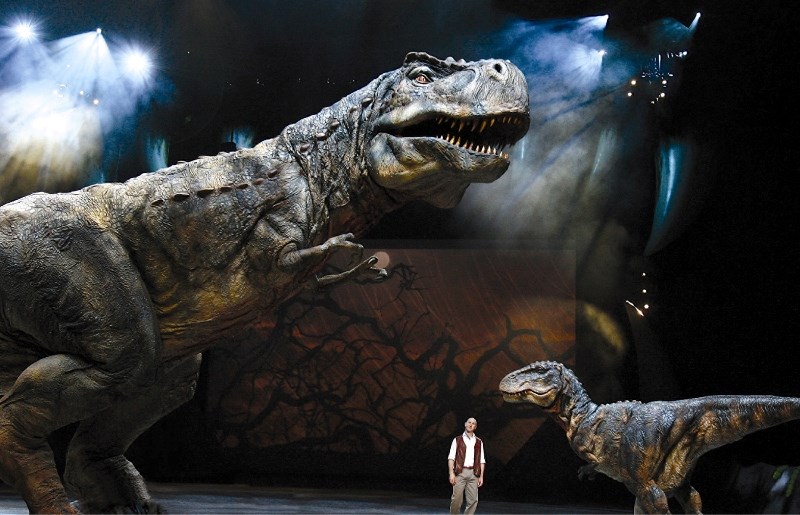 An adult Tyrannosaurus Rex and offspring with the narrator Huxley in a scene from Walking With Dinosaurs – The Arena Spectacular.

Anyone looking for a history lesson from more than 250 million years ago would normally need to travel to Drumheller to see the numerous fossils on display.

Walking with Dinosaurs: The Arena Spectacular will be coming to Calgary this August, boasting a life size Tyrannosaurus Rex that walks and interacts with 19 other dinosaurs the show uses.

The performance, which was adapted from the BBC series Walking with Dinosaurs, is for all ages, and tells the story of the prehistoric creatures’ dominance of Earth up until their extinction.

It began with performances in Australia, all of which were a success, prompting a North American tour that started only three months later.

The show utilizes puppeteers who control smaller, scale versions of the dinosaurs, manipulating them in a life-like manner.

“To make it appear that these creatures are flesh and blood weighing six, eight or even 20 tons, we use a system called ‘muscle bags’ made from stretch mesh fabric and filled with polystyrene balls, stretching across moving parts of the body,” said Sonny Tilders, dinosaur designer for the show. “These contract and stretch in the same manner that muscle, fat and skin do on real creatures.”

Ten different species of dinosaurs are represented in the show, including the Tyrannosaurus Rex, Stegosaurus and the biggest of the show, the Brachiosaurus, which measures 36 feet tall and 56 feet from nose to tail.

“Walking with Dinosaurs is the only show of its kind featuring life-sized, ‘live’ dinosaurs roaming the arena floor. People should definitely come out to the city to experience this captivating show. The dinosaurs are so realistic and gigantic, it’s a spectacle to see,” said spokeswoman Michelle Seto. “People are in awe of how realistic and large the dinosaurs are. They feel like they’ve actually travelled back to the time, saw real dinosaurs, and always want to come back and catch another show.”

Tickets for the show go on sale May 17, and are available through Ticketmaster. Eight shows will be performed from Aug. 11 to 15 at the Pengrowth Saddledome.