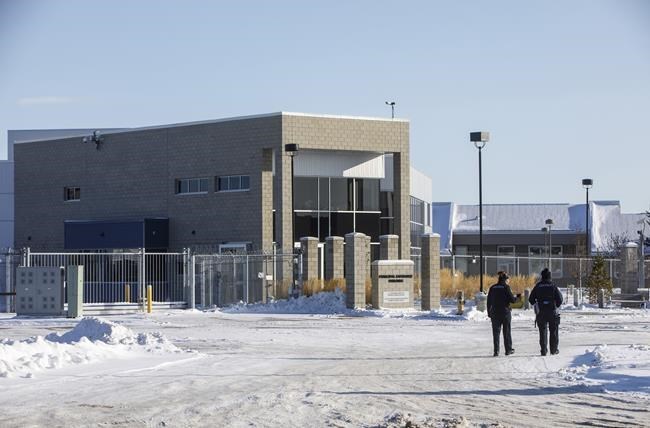 The Edmonton Institution for Women in Edmonton is shown on November 11, 2020. THE CANADIAN PRESS/Jason Franson

OTTAWA — Rights advocates and researchers are sounding an alarm about COVID-19 cases in Canadian prisons and jails, saying the numbers in recent weeks have surpassed the total during the first nine months of the pandemic.

The researchers say that from March to the end of November, there were 1,864 reported novel coronavirus cases among prisoners and jail staff in Canada, more than half of which were in October and November.

Prisoners have accounted for about 80 per cent of reported COVID-19 cases linked to prisons and jails during the pandemic, according to the data.

The findings emerged Monday through the Prison Pandemic Partnership, which brings together academics who study corrections and the Canadian Civil Liberties Association.

They are calling on provincial, territorial and federal governments to take bolder steps to protect people in correctional institutions.

Abby Deshman, director of the criminal justice program at the civil liberties association, cites concerns that some inmates do not have adequate access to masks or cleaning and hygiene supplies.

“The people confined in our prisons and jails are at high risk both of contracting COVID-19, and of serious illness and death as a result," Deshman said in a statement accompanying the latest figures.

“We need to make safe and effective community supervision — which would allow people to effectively physically distance — the number 1 priority. For those who continue to be supervised in jails, effective and humane public health measures need to be implemented.”

When the pandemic began, the number of people in custody in most provinces and territories started declining, said Justin Piché, an associate professor of criminology at the University of Ottawa and member of the partnership team.

Since then, many governments have "taken their foot off the gas as the number of COVID-19 cases accelerated past them," Piché said.

"Now is the time to do more to contain COVID, not people”.

The initial findings of the partnership "likely represent the tip of the iceberg" due to inconsistent availability of relevant figures, said Kevin Walby, an associate professor of criminal justice at the University of Winnipeg and the team's principal investigator.

“In order to put in place measures to prevent and limit the impact of COVID-19 in prisons, clear and full data is needed."

According to the latest Correctional Service of Canada figures, 1,211 federal inmates have tested positive for COVID-19, but of these only 73 cases were still active.

Four federal inmates with a COVID-19 diagnosis have died since the beginning of the pandemic.

Since the spread of COVID-19, the federal Parole Board has streamlined a number of its policies, noted Mary-Liz Power, a spokeswoman for Public Safety Minister Bill Blair.

"This downward trend in the overall federal inmate population is expected to continue over the coming months."

The government has also provided $500,000 to five voluntary organizations to develop pilot projects to help reintegrate offenders under supervision at community-based residential facilities, she said.

In addition, the Correctional Service has put in place extensive infection prevention and control measures at institutions across the country, Power said.

This report by The Canadian Press was first published Jan. 11, 2021.