The City of Airdrie has reopened a number of outdoor sports facilities for families to enjoy some much needed recreation time.
May 13, 2020 1:00 PM By: Ben Sherick 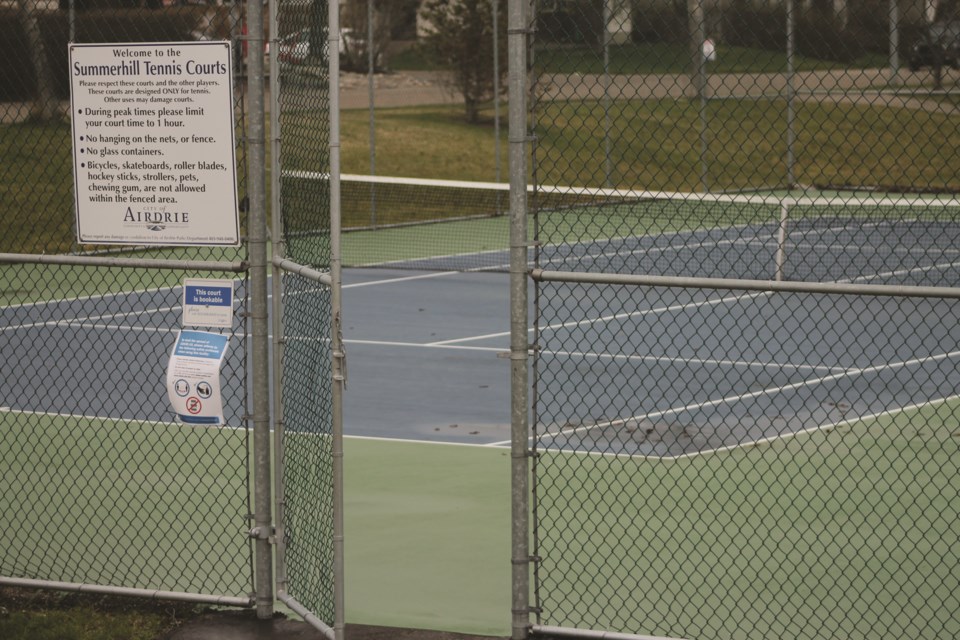 Outdoor sports facilities including tennis courts are once again open to the public. Photo by Scott Strasser/Airdrie City View

Following the announcement of the Alberta government's relaunch strategy, the City of Airdrie has made a number of outdoor sports facilities accessible for families to enjoy.

According to Kevin Brinson, team leader of Parks Operations, courts for pickleball, basketball, tennis and volleyball were reopened May 6. While the public may take advantage of these amenities, he said people should still use caution in an effort to prevent the spread of COVID-19.

“We’re still asking that people adhere to all the rules Alberta Health has put out,” Brinson said. “We don’t want more than 15 people out on a court at a time.”

According to Brinson, the City has installed signage at the courts advising users that social distancing remains the best course of action during the pandemic. He added the responsibility falls on residents to take care of their own health when using the courts.

“We’ve all been educated right from when this first started,” Brinson said. “Continue doing what you’ve been asked to do – wash your hands and do your social distancing.”

Equipment such as balls and rackets should also be disinfected both before and after using the public courts, he said.

As families who have been cooped up inside make use of the courts, Brinson encouraged everyone to share.

“When using public space, we all want to make sure that we all get the opportunity to do it,” Brinson said. “If we play by the rules and play nice, I think everybody will have an opportunity.”

A number of closures remain in place. Brinson said the skate park is still unavailable to the public, and playgrounds remain cordoned off. Additionally, Brinson said, washroom facilities have been barred.

City playgrounds have been closed since March 21, shortly after Rocky View Schools also restricted access to play structures at its schools. Brinson said these closures will remain in effect until further notice.

Brinson said there are also currently no plans to open the Airdrie Spray Park, which the City is treating like a pool and is not expected to be open until phase three of the province’s reopening strategy.

“We are not planning on opening it any time soon,” he said.

Airdrie playgrounds closed until further notice
Mar 31, 2020 5:00 AM
Comments
We welcome your feedback and encourage you to share your thoughts. We ask that you be respectful of others and their points of view, refrain from personal attacks and stay on topic. To learn about our commenting policies and how we moderate, please read our Community Guidelines.