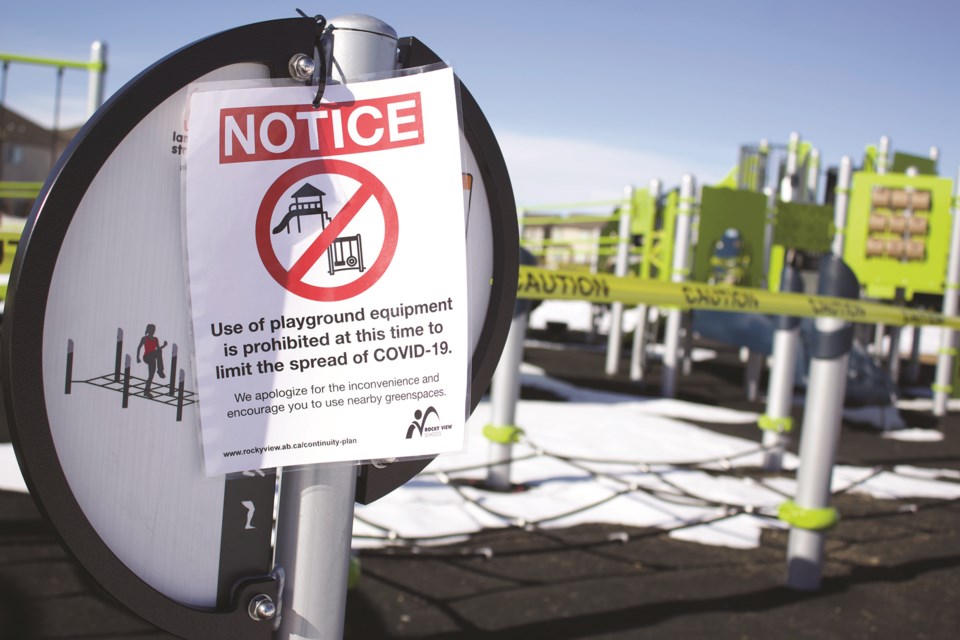 To combat the spread of COVID-19, local municipalities have closed their playgrounds to the public.

In a tweet March 21, Rocky View Schools (RVS) announced the closure of all play structures at its schools.

“While it’s important for all families to get outside, think parks, not playgrounds,” an accompanying post on the school division’s website stated. “Parks offer open spaces, making it easier to maintain the two-metre (six feet) distance to help stop the spread of COVID-19.”

“Obviously, it’s a breeding ground for potential exposure to the virus, because we can’t control who’s going, what their own personal hygiene habits might be ­– that sort of thing,” Waldner said. “[We] decided it was in the best interest of the population at large to actually shut down the playgrounds.”

Rocky View County likewise followed RVS’s lead. According to Bart Goemans, manager of Marketing and Communications, the closure applies to areas maintained by the County and by 15 community associations, including the Bearspaw Lifestyle Centre, the Chestermere Recreation Centre, Langdon Park and Springbank Park for All Seasons. The full list can be viewed at rockyview.ca

“This decision supplements announcements from the federal and provincial governments, as well as RVS, to limit public gatherings and maintain social distancing as we continue to do our part to help control the spread of the virus,” Goemans said.

According to communications advisor Fred Cheney, the City of Airdrie immediately closed all its playgrounds following the school division’s move. According to its website, the Town of Cochrane shut down its playgrounds and disc golf course March 20. In Chestermere, a press release March 22 announced the closure of its play structures.

“Playground equipment cannot be effectively sanitized between each group who plays there,” Mayor Marshall Chalmers said.

Posts to Bieseker’s and Irricana’s websites also indicated similar measures were taken in those communities.

“We don’t institute these things lightly,” Waldner said. “It’s done with a lot of thought and consideration, but it’s done for the greater good and the greater health of the entire community.”

Generally, parks and pathways remain open for families to use recreationally, so long as social-distancing practices are followed.

Families confined to the home can also take advantage of online resources to occupy themselves. Waldner said many museums and aquariums are offering virtual tours through their websites, while musicians have been performing online. Additionally, Bobbi Thomas, preschool and children’s programmer with Airdrie’s Genesis Place Recreation Centre, recommended activeforlife.com and appetitetoplay.com as resources for parents to find plenty of ideas on ways to keep kids active both inside and outside the house.

“We know it’s not as good as being able to go out to the playground and swing on the swings or play on the teeter-totter, but for now, it’s what we all have to do to keep our community safe,” Waldner said.

Fifty-three people in Alberta have now recovered from COVID-19
Mar 28, 2020 5:59 PM
Comments
We welcome your feedback and encourage you to share your thoughts on this story. We ask that you be respectful of others and their points of view, refrain from personal attacks and stay on topic. To learn about our commenting policies and how we moderate, please read our Community Guidelines.