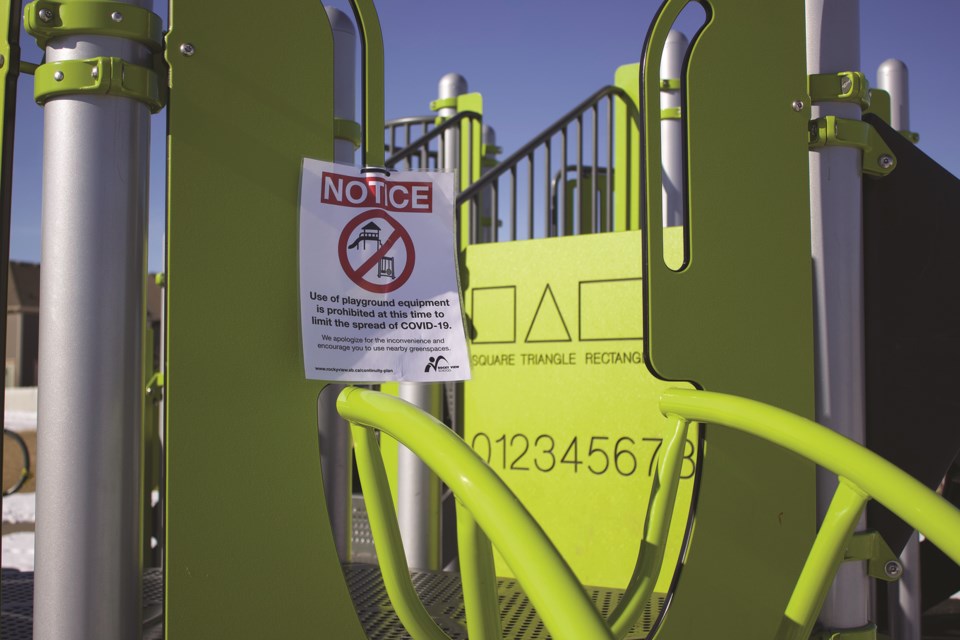 Rocky View Schools and the City of Airdrie have closed local playgrounds to limit the spread of COVID-19. Photo by Ben Sherick/Airdrie City View

To combat the spread of COVID-19, playgrounds in Airdrie have been closed to the public.

In a tweet March 21, Rocky View Schools (RVS) announced the closure of all play structures at its schools.

“While it’s important for all families to get outside, think parks, not playgrounds,” an accompanying post on the school division’s website stated. “Parks offer open spaces, making it easier to maintain the two-metre (six feet) distance to help stop the spread of COVID-19.”

Playgrounds around the city are now cordoned off with yellow caution tape and posted with notices advising families of the closure and encouraging them to use nearby green space.

According to an RVS spokesperson, the decision was made to minimize the spread of the virus.

“Play structures are such that they don’t allow children to adhere to the one meter social distancing standard se by Alberta Health Services, nor are they being sanitized,” the spokesperson said.

The decision was reached, the spokesperson said, after the Town of Cochrane implemented the same measure March 20, leading “RVS to working in co-operation with the Town and subsequently close all playgrounds across the jurisdiction.”

According to communications advisor Fred Chaney, the City of Airdrie immediately closed all its playgrounds following the school division’s move. They remain closed until further notice.

“Parks offer more open spaces making it easier, especially for our young people, to maintain the safe two-meter distance from others,” Mayor Peter Brown said. “If you are self-isolating you can still go outside as long as you keep two-meters away from others. However, if you are still feeling ill, please stay home.”

Airdrie’s neighbouring communities, including Rocky View County, Chestermere, Beiseker, Irricana and Crossfield have also followed the school division’s lead and enacted their own playground closures. Christina Waldner, communications and research officer with the Town of Crossfield, said the decision was not taken lightly.

“It’s done with a lot of thought and consideration, but it’s done for the greater good and the greater health of the entire community,” she said.

Currently, RVS does not have a timeline as to when playgrounds will be reopened.

Families confined to the home can also take advantage of online resources to occupy themselves. Bobbi Thomas, preschool and children’s programmer with Airdrie’s Genesis Place Recreation Centre, recommended activeforlife.com and appetitetoplay.com as resources for parents to find plenty of ideas on ways to keep kids active both inside and outside the house.

Keep kids active with alternative rec activities
Apr 1, 2020 8:00 AM
Comments
We welcome your feedback and encourage you to share your thoughts. We ask that you be respectful of others and their points of view, refrain from personal attacks and stay on topic. To learn about our commenting policies and how we moderate, please read our Community Guidelines.