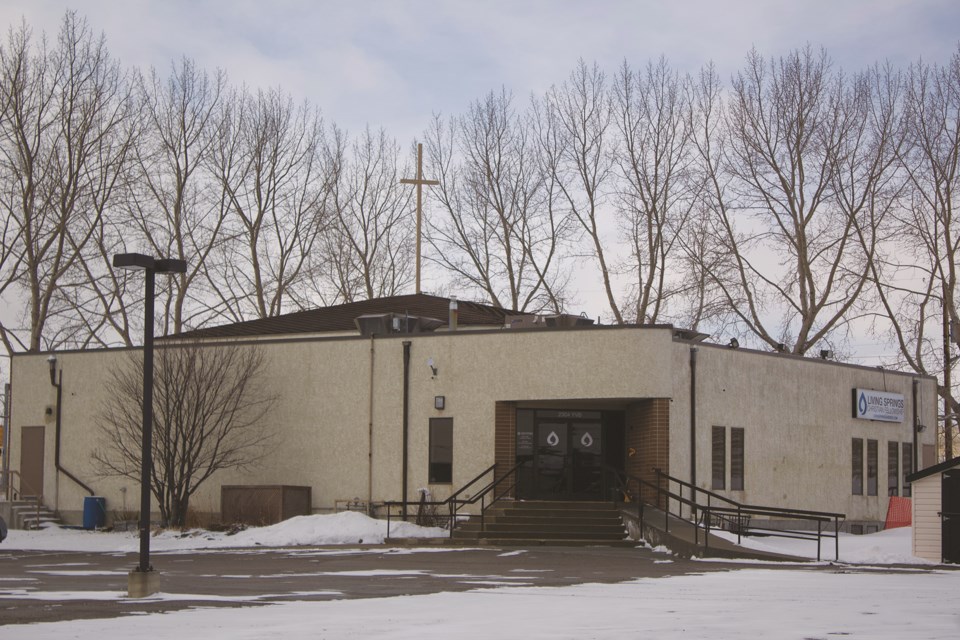 With restrictions on gatherings due to COVID-19, Airdrie's places of worship, including Living Springs Christian Fellowship, are adjusting how they tend to their congregations' spiritual needs. Photo by Ben Sherick/Airdrie City View

Religious communities in Airdrie are taking different approaches to spiritually edify members while a state of emergency restricts their ability to meet during the global coronavirus pandemic. For many faith leaders, the pandemic constitutes uncharted waters through which they must guide their congregation.

“There was no ‘Pastoring through Pandemic’ course that we got to take in Bible college,” Kyle Toner, discipleship pastor of Living Springs Christian Fellowship, said with a chuckle.

Places of worship were initially exempt from bans on large gatherings, but on March 15 ­– a Sunday – Alberta’s Chief Medical Officer Deena Hinshaw said they would be required to adhere to the same rules as other gatherings and limited to 250 people.

Then, Premier Jason Kenney declared a public state of emergency March 17, enacting a ban on any organized gathering of more than 50 people.

Even while still exempt, local places of worship recorded a drop in attendance and began acting to limit the spread of the virus. Prior to the government imposing similar restrictions, Friday prayers at the Airdrie Mosque were adjusted so no more than 50 people could gather at one time, according to Syed Soharwardy, mosque chairperson.

Toner said Living Springs held normal services March 14 and 15, but saw a decrease of about 70 per cent at its Saturday evening service and about half of normal numbers on Sunday morning.

Grace Baptist Church took measures to avoid physical contact at its service that weekend, according to lead pastor Dr. John Harrison, which included avoiding physical contact by not shaking hands or passing around the offering plate. Attendance was slightly lower than normal, he said, with most of the church’s seniors notably absent.

Many local faith leaders described a “scramble” once the province restricted gatherings to 50 people.

“We instantly looked at live streaming as an option and fast-tracked that,” said Mary Olinyk, executive of operations with Kingdom City.

According to its website, the Roman Catholic Diocese of Calgary, which includes Airdrie, cancelled all masses until April 5. In the meantime, daily mass will be live-streamed online from St. Peter’s Catholic Church in Calgary, and an online Sunday mass is also scheduled for March 22.

Kingdom City, Olinyk said, wanted to ensure the elements of its typical services were incorporated in its live-stream, and included a sermon and worship music performed live while band members kept a distance from one another on the stage. Grace Baptist’s live online service was similar, according to Harrison.

“We didn’t want to just pivot and move a service online, because we felt that doesn’t engage community building,” he said. “I think a big part of church is the human connection ­– not just the message and the music that are offered for people to receive, but the connection they have with one another.”

Toner said Living Springs has used that philosophy to guide how it moves forward. As a quick response, a sermon was pre-recorded and sent to members for March 21, but going forward the church will teach using a round-table format, with one pastor leading an online discussion on a topic with other pastors and members of the congregation provide comments.

Due to its small congregation, Airdrie Mosque will continue to meet in person, Soharwardy said. The mosque has further limited its Friday prayers to gatherings of less than 40 people, and imams have been instructed to keep a safe distance between congregants, who have been asked not to touch when greeting. The mosque is also using disposable prayer mats and implementing strict sanitation practices

It remains open for daily prayers, but Soharwardy said congregants have been opting to stay home. In Islam, he said, it is common for people to pray at home and gathering for prayer, while a powerful experience, is not required.

“The most important thing is that we want to make sure that we do not spread the virus,” Soharwardy said.

According to both Harrison and Olinyk, their respective churches’ first live-stream went off with few or no problems.

“People were so happy to gather [online] and for there to be something that was normal again,” Olinyk said.

With the first hurdle of Sunday morning now addressed, many churches are now discussing how to maintain a sense of community to combat a sense of isolation as the pandemic continues. For most faith communities, this includes digital resources such as YouTube, Instagram, Facebook or email.

“We still need to think through the ways in which we connect with our people, give them hope, provide them peace and a sense that things will get better,” Harrison said.

He added, the loss of connection could produce a greater fear and panic in some people. In the midst of the uncertainty and fear, Harrison said faith communities have a role to play as beacons of hope ­­– a sentiment echoed by other faith leaders.

In the midst of the pandemic, Soharwardy said people of all faith backgrounds should persist in their religious practices.

Water polo player constructs backyard pool to keep training
May 26, 2020 3:00 PM
Comments
We welcome your feedback and encourage you to share your thoughts. We ask that you be respectful of others and their points of view, refrain from personal attacks and stay on topic. To learn about our commenting policies and how we moderate, please read our Community Guidelines.