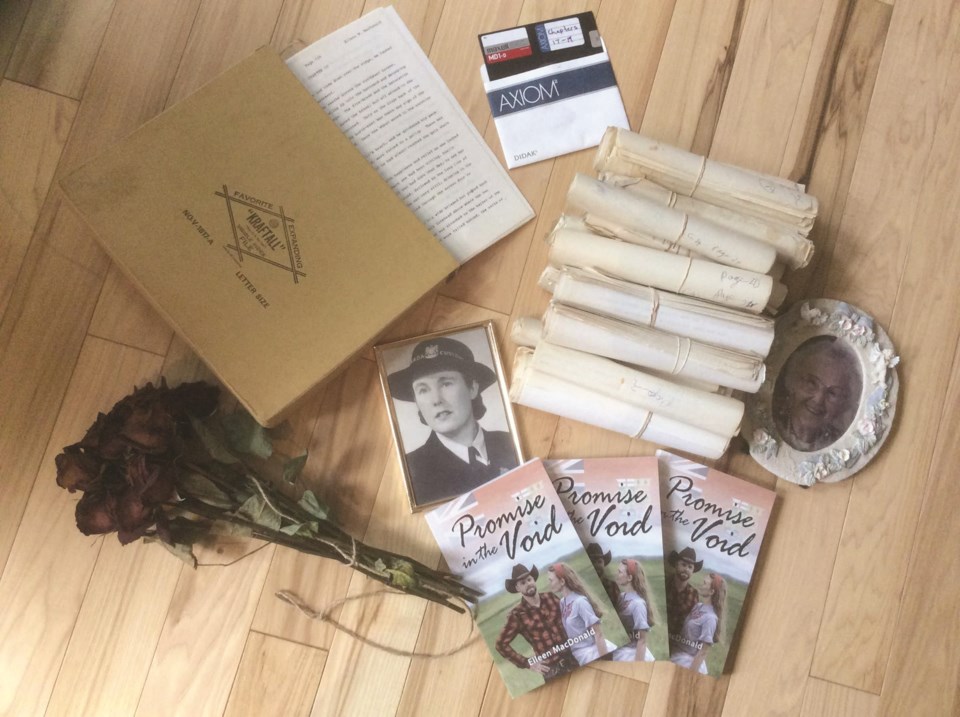 Eileen MacDonald drew on her own experience immigrating to Canada to write the novel Promise in the Void. Her granddaughter, Airdrie resident Rebekah Allen, published the book to honour her grandmother's legacy. Photo Submitted/For Airdrie City View

A local woman is working to support Airdrie’s historic heritage and preserve her grandmother’s legacy through the publication of a novel about the experience of war brides that was “a 70-year project, start to finish.”

“Grandma [Eileen MacDonald] was a vibrant personality in our family, and it’s a way to keep that connection with her and how she lived her life, and to celebrate her and remember our family heritage,” said Rebekah Allen, a 14-year resident of the city.

She is using the sale of MacDonald’s novel, Promise in the Void, to support the Nose Creek Valley Museum. The book is available for purchase at the museum, and 50 per cent of the $20 sale price will be donated to support the museum’s work of preserving Airdrie’s history.

According to Allen, the book is a work of historical fiction about a war bride who immigrates to the Canadian prairies following the Second World War, and the challenges she encounters in her new home.

“[MacDonald] started writing in the late 40s,” she said. “And she kept working on it whenever she had a chance – she was kind of going through her own major life transition.”

Allen said the novel served as an escape for MacDonald, who faced her own difficulties during her life, including the end of a marriage and relocating across several provinces. She believes the process of writing the book was therapeutic for her grandmother, who was able to work out her personal story through her writing.

According to Allen, MacDonald emigrated from Ireland with a friend in 1933 before eventually settling in Alberta.

“Much of the story actually parallels her life, because she landed in Edmonton at the train station, she put an ad up at the YWCA saying, ‘Two Irish lasses looking for room and board,’ and someone took her in,” she said.

The experiences of women who immigrated to Canada following the war resonated with MacDonald, Allen said. In many cases, these women did not know what to expect once they arrived.

“A lot of these young European women that came over as war brides – 48,000 came over after [the Second World War] – really were in shock and had to acclimate fast and they really had no other choice,” she said. “They just made it work. Grandma watched them, and she kind of recognized a similar experience to what she went through 10 to 12 years earlier.”

MacDonald passed away in 1998, but before she did, she gave the novel to Allen, who picked it up expecting a quaint read. Instead, she said, she was surprised by how good it was, and sought to have it published. After editing, the book was released by PageMaster Publishing in Edmonton in 2018.

“[These] are really important stories, but oftentimes the stories of war brides aren’t as familiar, and they will always minimize their stories,” Allen said. “The handful of wonderful ladies I’ve met that are in their 90s, they’ll say ‘Well, we just made do,’ and I think they had quite a dramatic experience when they came to Canada, and it’s worth telling. And I think this story tells it well.”

Promise in the Void is also available for purchase through amazon.ca or pagemasterpublishing.ca