The Vagina Monologues returns to Airdrie 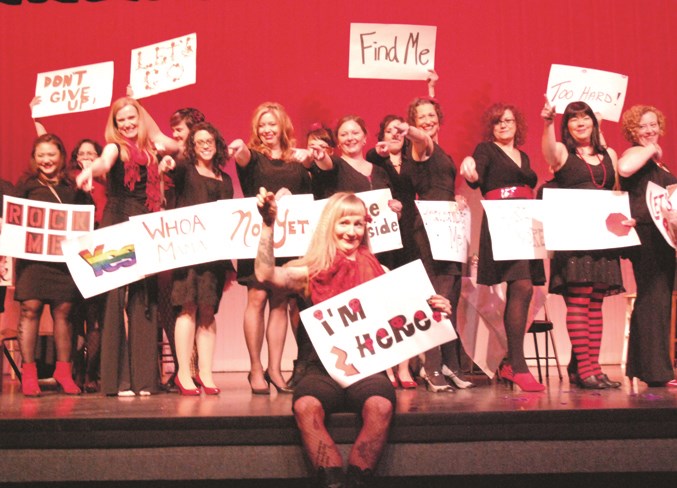 The Vagina Monologue returns to Airdrie March 8 after a two-year hiatus. The performance will benefit Community Links and Airdrie and District Victim Assistance and will celebrate V-Day, a global activist movement to end violence against women and girls started by author, playwright and activist Eve Ensler.

After a two-year hiatus, The Vagina Monologues will return to Airdrie March 8 to help raise funds for Community Links and Airdrie and District Victims Services Society (ADVAS) in their efforts to recruit and train front-line volunteers and provide programming and counselling specific to women who are victims of family violence and/or sexual abuse.

Laurie Jacob-Toews, part of the organizing committee for the production, said it was always the groups' intention to bring the monologues back.

"We've always felt it was a great show – a great performance. It's a great way to raise awareness about women's issues in our community and the world, and it's very empowering, especially for those who are a part of it," she said. "We always knew it would come back eventually."

The production ran yearly from 2012 to 2014 in Airdrie as part of V-Day celebrations – a global movement aimed at ending violence against women and girls. Jacob-Toews said because the monologues themselves don't change, V-Day Airdrie and Ladies Out Loud made the decision not to perform it in 2017 and 2018. However, she said the draw of the show remains strong and the new cast members bring different perspectives to the performance.

"It appeals to so many people; it's funny, it's impactful, it's sometimes very hard to listen to – there's some very tough stories in there," Jacob-Toews said. "We ask for a different cast every year and don't let anyone go in it more than once, and what we find is every year you hear these stories, there's always a personal connection for people."

The award-winning play is based on V-Day founder and playwright Eve Ensler's interviews with more than 200 women, according the Ladies Out Loud website, and deals with some tough topics that may leave viewers sad, angry and uncomfortable. But the play is meant to be enjoyed, Jacob-Toews said, and there are plenty of funny parts, such as a series of orgasmic moans, that will leave the audience in stitches.

"There's some really funny monologues. It makes us laugh and it makes us cry, and it really does," she said. "You might not have been impacted by something yourself, but it might resonate because of a friend or a family member or someone else you know of who maybe went through something similar and they can use the Monologues to bring that to light."

Jacob-Toews added Community Links and ADVAS will have staff available after the show, should attendees need to talk.

"We know the monologues can trigger some emotions in people they might not have even known [they had] or had suppressed for years about something that may have happened to them," she said.

Jacob-Toews said the monologues are raw stories from real women, and the Airdrie performance takes authenticity to heart by encouraging the cast – not actors, but a group of community members – to not over-rehearse their monologue in an effort to keep that emotion intact.

The play gives voice to experiences and feelings not previously discussed in public and has brought a deeper consciousness to the conversation around ending violence against women and girls, according to Ladies Out Loud. The piece celebrates women's sexuality and strength, something that remains taboo.

"The more we talk about it, the more we raise awareness, the more we make it OK and normalize it," Jacob-Toews said. "The hope is that more people will be wiling to talk about it and share and realize that there are supports and resources, and that they are not alone. That is the biggest thing, a lot of the time people think, 'Oh, it's only me...'"

Of a cast of 15, she said, eight of the women said they had similar experiences to those depicted in the monologues.

"That's a pretty crazy number for such a small amount of people," Jacob-Toews said.

When the play was first performed in Airdrie, she added, even some supporters were hesitant to put up a poster with the word vagina on it.

"But can you say elbow, because they're body parts and we should be able to speak about them because it's not a bad word," Jacob-Toews said she would tell them. "It's not a bad word at all, it's the actual proper term for a body part that every female has."

She said the show, though based on women's stories, is not something men can't enjoy.

"The stories aren't about man bashing, it's absolutely not. It's about recognizing bad things happen, but it's one person who made that bad thing happen. It's not generalizing, it's not saying all men are bad, it's not about that," she said. "It's really just about making people aware of some of the things women do experience – good or bad."

The show is two-thirds sold, according to Jacob-Toews, and will likely sell out. Tickets are $30 each and can purchased at bertchurchlivetheatre.ticketpro.ca