After three months of friendly competition, Team Red has been declared the winner of the Sirens Lip Sync Showdown .
0
Feb 14, 2019 12:01 AM By: Jessi Gowan 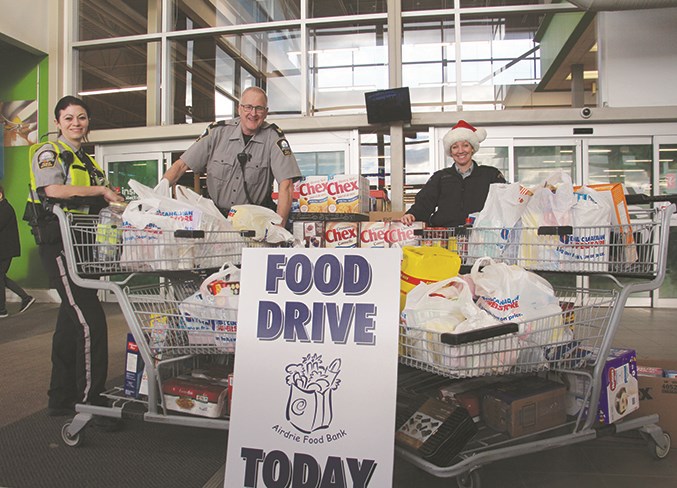 Airdrie RCMP and City of Airdrie Municipal Enforcement (Team Blue) held a food drive at the Real Canadian Superstore Dec. 21 in support of the Airdrie Food Bank, as part of the Sirens Lip Sync Showdown. The winning team was recently announced, and is now in the process of choosing a song for the other team to lip sync in a music video.

After three months of friendly competition, Team Red has been declared the winner of the Sirens Lip Sync Showdown. Pitting Team Blue (Municipal Enforcement and RCMP) against Team Red (Airdrie Fire Department and Alberta Health Services EMS), the competition raised money and donations to support local charities, including the Airdrie Lioness Club, Airdrie Food Bank and Canadian Blood Services. “It’s been very substantial, how much we were able to come out and support those organizations,” said Damon Johnson, a firefighter with the Airdrie Fire Department (AFD). "It felt good to win, but it was even better to see the community come together to support both teams.” The competition kicked off in November with a toy drive in support of the Airdrie Lioness Club’s Christmas Hamper Program. Team Red took the lead after the first challenge, collecting 840 toys at a value of nearly $11,000, while Team Blue came in short with 689 toys worth just more than $10,000. Team Red also took home a win at a charity hockey game hosted Nov. 24 at Ron Ebbesen Arena, which Johnson said was well-supported by the community. “Honestly, when I walked into that building and I saw the stands were completely packed, it just floored me,” he said. “I knew that people were interested in coming out, but I didn’t realize it was going to be standing room only at that hockey game.” The December challenge saw the teams collect donations for the Airdrie Food Bank – and Team Blue took the win by a landslide. Combined, the teams managed to accumulate more than 11,000 pounds of food, but more than 7,000 pounds was contributed by Team Blue alone. “They blew us completely out of the water,” Johnson admitted. “But at the end of the day, it’s supporting such a good cause.” January’s deciding event came down to blood drives in support of Canadian Blood Services. The teams were tasked with filling both Airdrie donor clinics and encouraging residents to donate anywhere across southern Alberta to support the team of their choice. “We put out the call for the blood drives, and they were both completely full – there were no openings whatsoever on either one of those two dates,” Johnson said. “We really had a great response from the community.” In the end, Team Red managed the win by securing 110 donations and signing up 15 new donors, while Team Blue contributed 56 donations and eight new donors. Now, it’s up to the winning team to choose a song that Team Blue will have to lip sync in a music video that will be released for the public to enjoy. According to Johnson, team members were asked to provide song suggestions, but the team also put out a call on social media for feedback from Airdrie residents, as well. “We tallied up the most popular songs and voted,” he said. “Then, we’ll pick the top three songs to forward to Team Blue, and pick out the most popular song for them to lip sync to.” While Johnson said he’s looking forward to seeing the video, he’s not sure if another Lip Sync Showdown is in the cards for this coming November. Still, he said, the agencies have discussed the possibility of holding another friendly competition in the future. “We always work well together, as these four agencies, on emergency calls when it’s a stressful situation,” he said. “But it’s nice to get together and do something friendly at the end of the day and have some fun with it.”