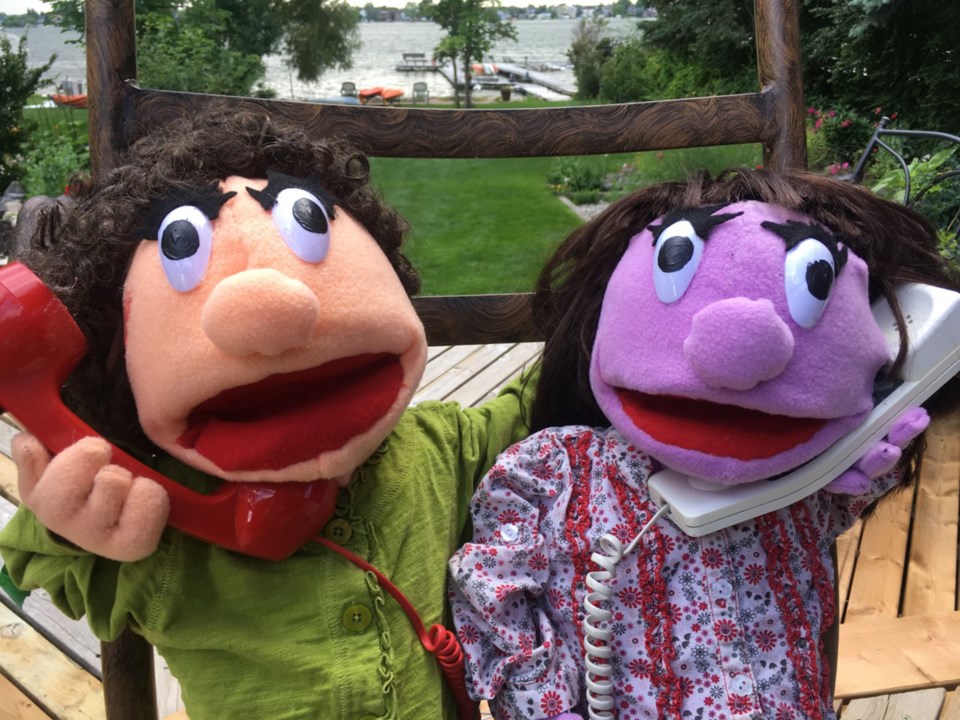 Kitty and Mabel, puppet stars of The Sunshine Café, having fun between performances. The puppets, along with six actors, help tell the history of Chestermere in a Chestermere Historical Foundation production. Photo Submitted/For Rocky View Publishing

The Chestermere Historical Foundation is hoping to connect residents with the city’s past through a performance called Sunshine Café.

The play will take audiences back in time to see moments and people who have shaped Chestermere’s history, according to Jen Peddlesden, president of the Chestermere Historical Foundation.

“As a Chestermere resident, I was really excited to learn that a play was being created about our history,” said Megan Matthies, a member of the cast. “As someone who is trained in theatre, I wanted to be part of a play about the community I call home.”

The production follows a young girl who isn’t enthusiastic about living outside of a big city, Peddlesden said. While walking around the community one day, the girl enters a magical café and is taken back in time.

“She goes into the coffee shop to sit…and it's a magical time-travelling coffee shop, where time comes and goes and you get to travel through the history of Chestermere,” Peddlesden said “[The] various people who are involved in the history come and speak to her and she interacts with them.”

The historical foundation received a portion of casino funding it had applied for in 2017, according to Peddlesden, which was used to help produce the play. One of the first steps was hiring writers Melissa Dorsey and Trevor Matheson – who have both worked on various productions for Heritage Park – to write the script, she added.

The play, which includes six actors and two puppets, recently had a run of performances at local schools.

“Those children have all come up to me and said they really enjoyed the play and said they'd like to see it again. I think that was good,” Peddlesden said. “Some of the teachers also expressed their appreciation on how good it was.”

The Sunshine Café will perform two shows, Aug. 18 at 3 and 5 p.m., at the Chestermere Regional Community Association Centre. The show is family-friendly, Peddlesden said, adding programs will be printed in black and white so children can colour them at the show and take it home as a souvenir.

She said she hopes the audience will leave feeling a bit more connected to the city.

“If you don't know your community and where it came from, then you don't feel as much at home here as you do when you find out a bit more about the history,” Peddlesden said.

Tickets are free, but must be reserved in advance.

For more information or to reserve tickets, visit chestermerehistoricalfoundation.org