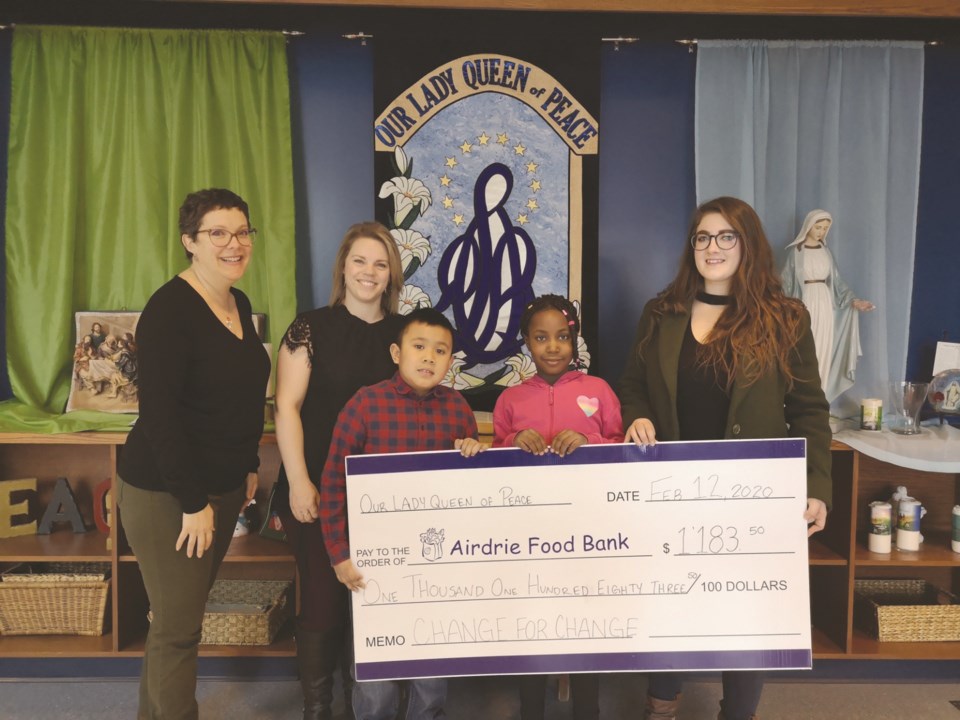 Students at Our Lady Queen of Peace (OLQP) School banded together to raise money to help provide food for local families in need.

Through its Change for Good campaign, OLQP’s entire population of 750 pupils raised $1,183 for Airdrie Food Bank.

“It made me very proud as the principal, because we teach them every day to be kind to others and act in certain ways,” Patricia Whimster said. “Sometimes, we don’t really realize the effect that we have on the kids…and when they do this sort of thing, it really makes us aware that they are listening, and we’re just so proud of them for coming together for this effort.”

The fundraiser, initiated by students and their teachers, was inspired by the Calgary Roman Catholic Diocese's “The Coldest Day of the Year.” The event raises awareness about homelessness, and corresponded with the school’s Winter Walk on Feb. 12, which OLQP uses to get students outside during the coldest stretch of winter.

“The students often talked about collecting change at home in their piggy banks, but they thought, ‘Instead of collecting our money in our piggy banks, why don’t we bring it to school and see how much we can raise as grade levels, and then donate it to people that need it a little more than we do,’” Whimster said.

While the school has done the Winter Walk in the past, this was the first year a fundraising component was incorporated, she added.

Students brought in change from Jan. 27 to 31, and were reminded to donate through daily PA announcements. To incentivize the fundraiser, the grade with the most donations was rewarded with an extra period of physical education, which was ultimately awarded to Grade 3 students.

The school then presented a cheque to Airdrie Food Bank Feb. 12.

“We all have a role to play in fighting hunger,” Christine Taylor, the food bank’s Events, Marketing and Communications manager, said via press release. “Children can make a positive difference in the lives of other kids in need. It’s important to talk to children about hunger and inspire them to take action to fight hunger. The children at OLQP have really come together as a community and we couldn’t be prouder of them.”

Whimster said, as a Catholic school, each day starts of with a prayer to remind the school community to be good citizens and work together to be good. The fundraiser drives home that message, she said, and is a vital way to impart social skills.

“It’s one of the most important things that we can do, because I find that kids want to be good to each other,” she said. “If we give them the tools to get to know how to do it a little bit better, they’re going to run with it.”

Based on the success of the fundraiser, Whimster said she expects OLQP to repeat it in a year’s time.