An Airdrie teenager channelled his creativity to make a difference for a neglected wolfdog that lives at Yamnuska Wolfdog Sanctuary (YWS). Evan Pierson, 14, said he was inspired to help Horton – an Irish wolfhound that was rescued by YWS from abuse and
Oct 8, 2020 10:00 AM By: Jordan Stricker 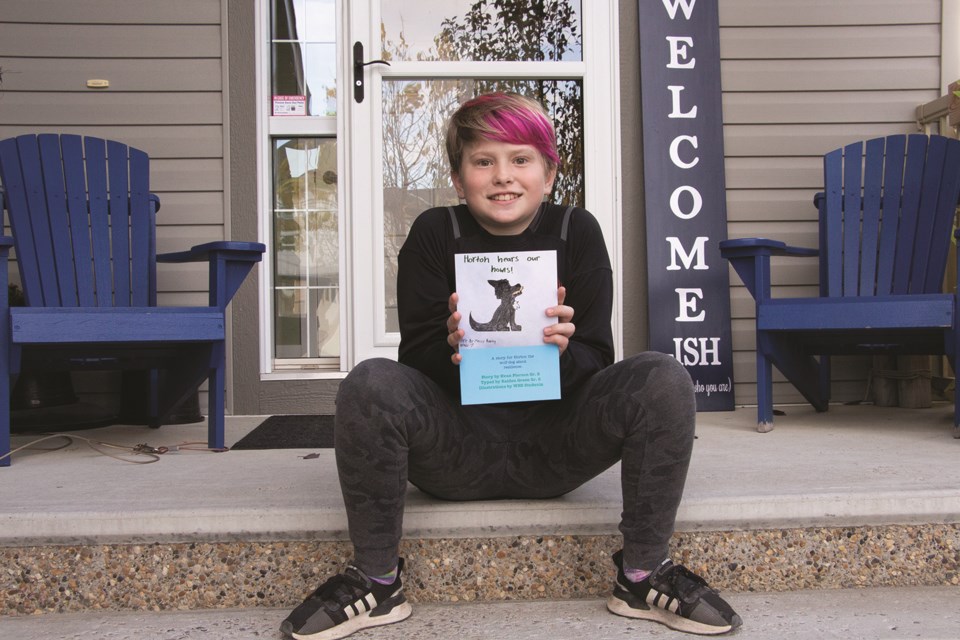 An Airdrie teenager channelled his creativity to make a difference for a wolfdog that lives at Yamnuska Wolfdog Sanctuary (YWS).

Evan Pierson, 14, said he was inspired to help Horton – an Irish wolfhound that was rescued by YWS from abuse and neglect – after a visit to the Cochrane-area sanctuary. After seeing how shy Horton was towards humans, Pierson was moved and decided to write a book to help the animal.

“I thought the book would make money to help with Horton's rehabilitation as well as the sanctuary and the other wolf dogs.”

With the help of classmates at Windsong Heights School (WHS), Pierson wrote Horton Hears Our Howls, which includes a collection of illustrations by his peers. Grade 6 student Raiden Green typed the book. Pierson said the process of creating the book was no easy feat, but he had fun getting the project finished knowing he would be helping Horton and the other wolfdogs at YWS.

“It was sped up a lot by the help of the other students by their drawings, inspirational quotes and typing the book out,” Pierson said. “I had a lot of fun because this was something new for me that I had not done before.”

According to Sherri Goodall, learning support teacher at WHS, Grade 4 and 8 students at WHS used money from bottle recycling to support Horton in 2018. While she was working with Pierson last year, the two spoke about other ways to support the dog. The idea for the book took off quickly, and Pierson was fuelled by both his love for animals and the school’s mascot.

“We are called the Windsong Wolves,” Goodall said. “In our first year, we created a culture and creed of what it means to look like, act like and be a part of a pack, like a wolf family.”

Goodall said the book has created a lot of excitement at the school. Fifty copies were originally printed, which have already sold out. Another 100 have been ordered. At $10 per book, Goodall said that equates to $1,500 raised to help Horton’s rehabilitation once all are sold.

“For Pierson, he wanted to make sure everyone knew Horton’s story,” Goodall said.

Alyx Harris, operations manager with YWS, said there are currently 29 wolfdogs at the sanctuary, which is located west of Cochrane. As a non-profit organization, initiatives like the one spearheaded by Pierson are vital to the sanctuary’s success, she said.

“We are mainly funded through our tours,” Harris said. “We did have to close to the public for two months due to COVID-19, with next to no funding coming in. It was challenging. Projects like these students fundraising through their book are really important to us. We appreciate it so much.”

Students at WHS can purchase a copy of the book by contacting the school. Copies are available at YWS for anyone else interested.