The old, flaking art panels at Nose Creek Park’s sport court are finally being taken down, but their end marks a move and expansion for Airdrie’s Street Art Gallery.
May 31, 2018 10:04 AM By: Airdrie City View 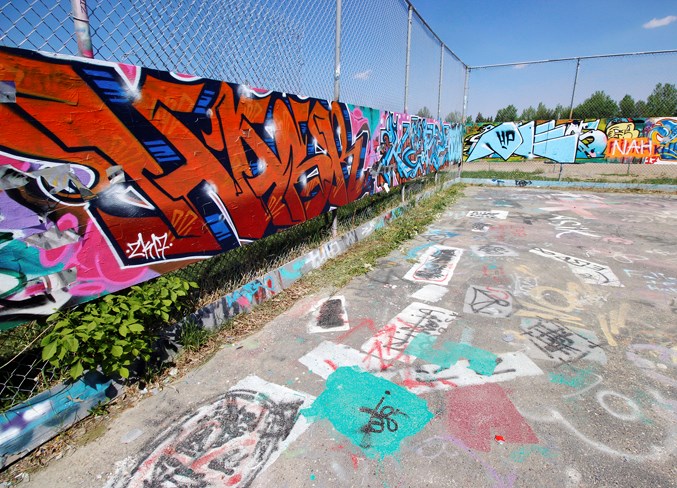 After the Airdrie skatepark migrated to Chinook Winds, the Nose Creek Park sport court was left stagnant. At the request of Creative Airdrie, the area was officially designated the Street Art Gallery in 2014.

The old, flaking art panels at Nose Creek Park’s sport court are finally being taken down, but their end marks a move and expansion for Airdrie’s Street Art Gallery. “It’s about time to move on and do something better,” said Archie Lang, Parks and Public Works manager with the City of Airdrie. The City is erecting panels in three new locations – the first directly adjacent to the current gallery at Nose Creek Park, the second at Highland Park north of Veterans Boulevard, and the third on the north end of East Lake Regional Park. A number of double-sided panels at each location will operate as free walls for street artists to paint as they please. “The City of Airdrie is actually providing a legal venue for artists to practice their craft, whether it’s graffiti or other aerosol art,” said Toner, a Calgary-based urban artist scheduled to lead a workshop for the gallery’s opening. “Calgary doesn’t have a place like that.” Toner, who’s real name is Sergey Ryugin, immigrated to Canada from Sevastopol, Ukraine, in 2001. He’s since been heavily involved with street art in Calgary, and said there are unwritten rules artists apply when it comes to free walls. With his workshop, he hopes to not only teach the basics and history of aerosol art, but also provide a platform for budding artists to ask questions and learn as they go. “I believe everyone should be able to express themselves in whatever medium they choose,” Toner said. Street art has a strong connection to a place and its people, he added. “Art represents the visual fabric of a city, and muralism, as a movement, has become widely accepted and widely popular,” Toner said. “If you look at places like Europe, there’s murals everywhere and there’s mural festivals everywhere.” It’s his hope to organize a mural festival in Calgary, but support and success for street artists there isn’t as strong as it elsewhere. Toner said artists from Calgary would even come to Airdrie to use the panels at the old gallery. “I’m hoping that Airdrie…might give Calgary some thinking to do – not to knock on the city that I live in and admire,” Toner said. Lang expressed the same hope, and is excited to see what kind of pick-up the panels get. They will be free to use after the grand opening June 16. Toner’s workshop is scheduled to run from 1 to 3 p.m. To register online, visit airdrie.ca/streetart Panels from the old gallery will be taken down and put in storage, but Lang added anyone interested in acquiring a panel can contact the City. The old gallery will be converted into a pickle ball court. “These artists are artists in their own right,” Lang said. “It’s a different type of art – a fringe art – but it’s art, and it needs to be appreciated. What better place than in the City of Airdrie along our pathway system?”