Crowds packed the Genesis Place Recreation Centre Field House June 16 for a benefit concert in support of StrazStrong and Ryan Straschnitzki.
Jun 21, 2018 12:01 AM By: Ben Sherick 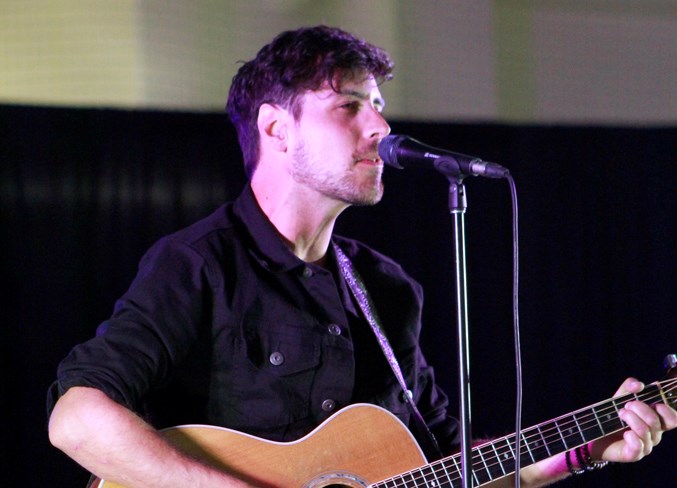 Matt Blais was one of the many acts that took the stage at Genesis Place Recreation Centre June 16 during the StrazStrong Benefit Concert. Proceeds from the concert will go to support Ryan Straschnitzki and his family as he recovers from injuries sustained during the Humboldt Broncos&#8217; bus crash April 6.

Along with the concert, the event featured a silent auction, including signed jerseys from Airdrie NHL player Aaron Dell of the San Jose Sharks and Jay Beagle, recent Stanley Cup champion with the Washington Capitals. All proceeds from the event will aid in Straschnitzki’s recovery and rehabilitation from injuries sustained during the Humboldt Broncos’ bus crash April 6.

“It’s really important that we raise as much money as we can,” said Cody Thompson, Straschnitzki’s former strength and conditioning coach and one of the organizers behind the StrazStrong campaign. “In about a month, he’s on his own. There isn’t going to be anything else for him there. As far as gofundme pages and insurance and those sorts of things, they aren’t going to be paying out anytime soon.”

The concert was headlined by Hamilton, ON., rock band Monster Truck and featured performances by former Guns N’ Roses guitarist Bumblefoot, Matt Blais and Smitty Kingston – who wrote the song Stick Out By the Door following the bus crash.

Although fundraising totals from the benefit concert won’t be known for about two weeks, Thompson said the event’s success illustrates how the Airdrie region has been touched by Straschnitzki’s story.

“It shows that as a community, we want to step up and support Ryan and we’re willing to go the extra mile,” he said.

Thompson attributed the support for Straschnitzki – who was paralyzed from the chest down in the collision – to the common experience of playing on a hockey team and travelling by bus between games.

“When people step up, I think they want to support what happened because it’s something that a lot of us aspire for our kids to do – or we aspired, and we went through it – that you feel very close to it and you want to do all you can to help,” he said. “Really, the biggest, best way we can help is financially, at this point.”

Straschnitzki’s mother, Michelle, said she was thankful for the effort that went into the concert and for the support the community has shown during her son’s recovery. Straschnitzki is still in Philadelphia for treatment, Michelle said, and has made a remarkable recovery in two-and-a-half months.

Michelle said Straschnitzki is now off opioids while continuing on nerve pain medicine. Straschnitzki, according to his mother, is tenaciously working through his recovery.

“He’s getting a little impatient because he’s 19, but he knows that his body has limitations,” she said. “He’s getting through that, and he’s just pushing through like a champ.”

While the family appreciates the attention to Straschnitzki’s story, Michelle said she hoped the benefit concert would also bring awareness to the other families affected by the tragic bus accident.

“It’s not just for Ryan’s story – although Ryan does need the help and we’re grateful – but it’s to shed a little bit more light on the whole tragedy, the human side of it,” Michelle said. “I know some of them are really suffering and it breaks my heart, but if we can do our part to help them, then we’re more than happy to do it.”