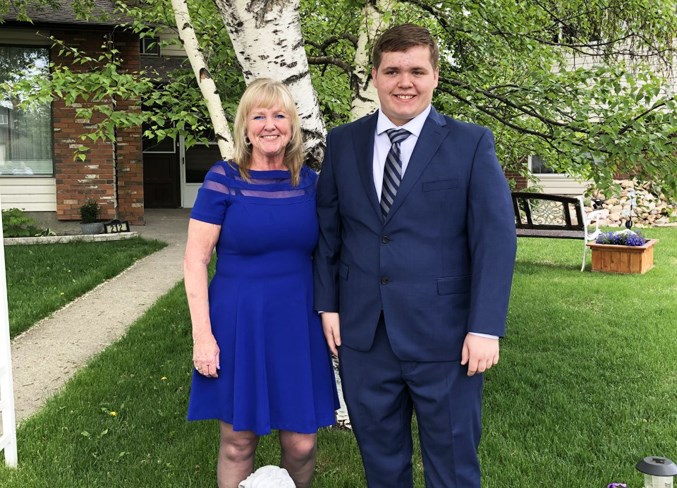 Stephen's Backpacks Society director Nancy McPhee (left) with her son and society president Stephen (right). McPhee said the society will focus on providing four families with home makeovers in 2020, along with its other programs. File Photo/Airdrie City View

As Stephen's Backpacks Society (SBS) enters its 13th year since obtaining official society status, the local charity is shifting its focus in an effort to empower families and offer them a sense of stability with its Four Seasons of Hope for 2020.

"We believe that empowering families with a safe, warm furnished home will give that family more confidence to seek and achieve employment, which will enable them to provide a safe, secure and healthy environment for their children," SBS's website states. "The children can enjoy their years of learning, dreaming and just being children enjoying life and having fun, instead of worrying about what tomorrow will bring."

SBS works with homeless shelter organizations such as Inn From the Cold and Awo Taan Healing Lodge Society Women's Emergency Shelter – which have vetted potential families to ascertain suitability and need – to select one family per season to receive a home makeover from the society.

"What we do is we work with the agency and find out as much as we can about the family," said Nancy McPhee, SBS director. "We never meet the family, it's just more being able to personalize the home. So, having the colour scheme that mom likes and having the super hero comforters that the kids like and stuff like this, and just really try to personalize it."

She noted all families selected for the program are given further support through the shelter agency that recommended them to SBS.

"One of the most important things is that after the home is done for them, they need support around them because you want them to succeed," McPhee said. "So one of the things that we're looking at is we definitely want people who are working, and also that the agency will continue to put support around them so that we can keep in touch and see how they're doing."

She said SBS has helped 32 families since 2008 through its Project Hope program, but "got away from it a bit because the backpacks were so intense that it was really hard to do that, too." However, through heart-to-hearts with those she respects in the not-for-profit industry and discussions with the SBS board, McPhee said, the society decided to reinvigorate the program and commit to helping four families this year.

Though she said the backpacks – which provide school supplies, toys and other important items to children in need – will still be an important part of SBS, the society wants to have a bigger impact on those it helps.

"I mean, we could be doing 30,000 backpacks and it wouldn't be enough," McPhee said, adding though the backpack program is valuable, "when the backpack wears out, the supplies are gone."

"Nothing is going to be more empowering than when mom can go out and buy her son a backpack...or her daughter a pair of shoes. And that's what our goal is, to empower these families and not just give them a bunch of used furniture, [but to] personalize it, make it a home, because when you have a home, you have stability. When you have stability, you can dream out loud, the sky's the limit – then you can go home and put your kids to bed at night and have food in the fridge. I mean, that's the starting-off point that everybody needs. Everybody needs a home."

She said the average Project Hope home makeover costs between $15,000 and $20,000. The largest family aided by the program was a mother and six children from Airdrie, and that makeover came in at around $20,000.

"If anybody wants to donate that's wonderful, but it would be wonderful if they would donate cash because then we can find out exactly what mom wants and make it really personalized," McPhee said, adding donations can be made at stephensbackpacks.com

In addition to Four Seasons of Hope, SBS will also focus on its newest program that began just last year. Prior to the start of school in 2019, 150 Teacher's Kits – each filled with enough supplies for 10 children – were delivered to area schools.

"They were so well received here in Airdrie," McPhee said. "I've been getting so many comments from the teachers, 'Thank you so much. We didn't have to dig into our pockets. It helps so many kids.'"

SBS's other programs – including the backpacks, Footprints (which provides new running shoes for children in need) and mentoring of youth with autism – will continue, as well.

"It's going to be a good year," McPhee said. "It's not going to be a raving 10,000-backpack year, because we are focused on really making a difference to four families' lives."