Stephen’s Backpacks Society is gearing up for its 10 th annual Canada Day barbecue July 1 – which, according to director Nancy McPhee, will offer a wide assortment of food, entertainment and activities to appeal to people of all ages.
Jun 28, 2018 12:01 AM By: Jessi Gowan 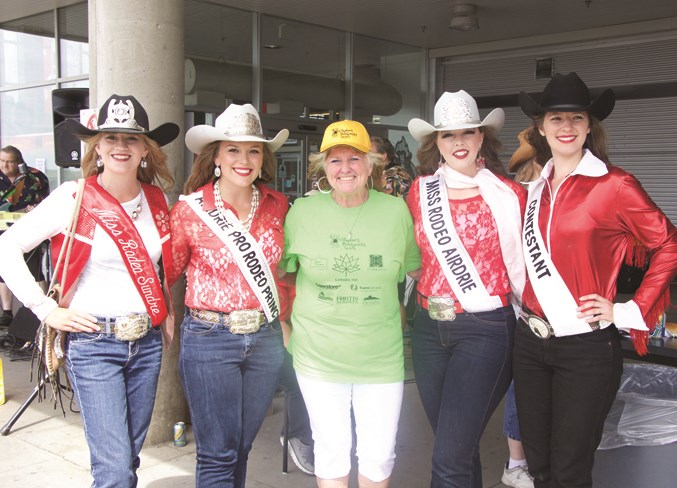 The Stephen&#8217;s Backpack Society will be hosting its 12th annual Canada Day barbecue at the Real Canadian Superstore July 1, featuring live entertainment, fun and games for the whole family and, of course, plenty of food to eat.

Stephen’s Backpacks Society is gearing up for its 10th annual Canada Day barbecue July 1 – which, according to director Nancy McPhee, will offer a wide assortment of food, entertainment and activities to appeal to people of all ages. “It’s going to be just the most amazing day,” she said. “We’ll have a beautiful barbecue, run by the Real Canadian Superstore here in Airdrie, and we’ll be serving families all kinds of wonderful things to have.” After enjoying a meal, McPhee said families will be able to let the little ones participate in games and crafts organized by Kids Quest Preschool, while the adults spend some time learning how to dance the salsa. Or, she said, both young and old can sit back and take in the live entertainment, which will include music, Indigenous dancing and drumming, and Highland dancing. “The purpose of this barbecue has been, each year, to support the Stephen’s Backpacks Society for children in need,” McPhee said. “This year, we’re going to focus all our efforts on getting kids new running shoes for back-to-school – we have backpacks, so now, we want to make sure every child has a new pair of shoes to start the year off right.” The organization started distributing backpacks to children and families facing financial challenges when McPhee’s son Stephen was just five years old. According to McPhee, Stephen – who is on the autism spectrum – learned in 2006 that some children don’t grow up with enough food to eat, beds to sleep in or a shelter over their heads. “His whole mandate was just to give these kids hope through these gifts,” McPhee said. “We started with 15 backpacks on our kitchen floor and now, 12 years later, he’s 17 and hasn’t lost one drop of passion.” Over the past 12 years, McPhee said Stephen’s society – and its many supporters – has helped 50,000 children across the province and provided 15,000 new pairs of running shoes. He has even been able to help take 32 families out of shelters, she said, and provide them with apartments full of brand-new furniture. “It’s never about him, though – it’s always about the kids who are in need, who so desperately need hope,” McPhee said. “And we are able to continue doing this because we receive so much support from the community – we are going from 4,000 backpacks distributed last year to more than 6,000 this year.” While McPhee said part of the reason the organization sees so much support is because of her son’s pure heart and generous spirit – but she also knows the community appreciates the society doesn’t employ any paid staff. Instead, she said, Stephen’s Backpacks is operated by 500 hard-working volunteers and 300 dedicated corporations. “Stephen is a very unique young man – he’s incredibly focused, very loyal to what his core values are, and I just marvel at his passion,” McPhee said. “For me, it’s just about supporting him. I really believe that, as parents, we have that obligation to get behind our children in their dreams.” Traditionally, prior to the barbecue, McPhee said coupons have been distributed at the city’s Canada Day parade. However, according to McPhee, due to recent bylaw changes, this will no longer be possible. “We will have coupons available at stores around Airdrie, including the Real Canadian Superstore,” she said. “You can grab them there and get $1 off your meal. And this year, every family that comes out will be entered for a chance to win $1,000 in groceries, so we’re really excited about that, too.”