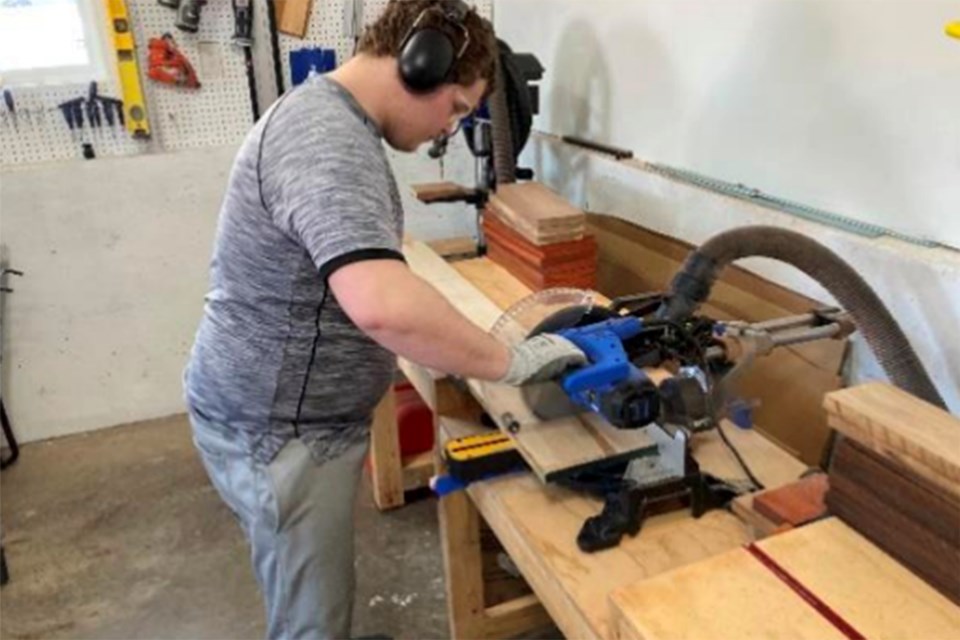 Local organization Stephen's Backpacks has found another creative way to give back to children in need through the sale of custom handmade cutting boards. Photo Submitted/For Airdrie City View

Stephen’s Backpacks Society in Airdrie has found another creative way to help kids in need, this time by selling custom hand-made cutting boards.

“I can’t even put into words how great this has been,” said Nancy McPhee, executive director of Stephen’s Backpacks and mother of Stephen, the organization’s president and namesake. “They really are like a piece of art and every single one is different.”

According to McPhee, Stephen became infatuated with carpentry in Grade 10, when he took part in a house-building venture through Rocky View Schools’ Building Futures program. Ever since then, she said her son has been looking for ways to incorporate his love for carpentry with his charity.

Each hand-made cutting board that is sold will fund a backpack full of important items to help kids in need, which has been the staple of the charity’s operations.

The cutting boards are currently being sold in five local stores, and McPhee said the team is working on securing a few more. The boards can currently be found in Pharmasave, The Store Upstairs, local butcher shop The Meatery, Your Local Ranch Ltd. and Pete’s Liquor.

“It’s very exciting,” she said. “We take the raw cost of the wood, add what it costs for the backpack and items and that’s how we found the pricing for them.”

“It’s just wonderful because every cutting board that goes out the door, a child gets a backpack,” she added. “That’s why we are doing this – it’s a way to bring some joy and projects during this time of COVID-19.”

Stephen said the project is made even better because he knows he is helping kids with each sale.

“I feel great about it,” he said. “I feel especially great about the cutting boards because I love making things. It has been enjoyable, especially during times like this.”

One of Airdrie’s most well-known charities, Stephen’s Backpacks has been in operation for 14 years. According to stephensbackpacks.com, the society started after Stephen, then just six years old, overheard his parents talking about a homeless man who was written about in the newspaper.

“When he asked about it and learned that there are homeless children, men and women it ignited a vision of change when he said to his mother ‘Mommy we have to help them’,” the website stated.

According to the website, since 2006, the charity has helped more than 70,000 children in need and has supported 32 families with a second chance at home life. Even with the pandemic and no access to nearly as many volunteers as they are accustomed to, three people still managed to put together 5,000 backpacks for children in need.

“Stephen has become a voice for homeless children, and it all started with a dream to help those in need,” the website stated.

For more information or to purchase a cutting board, visit the locations mention or the organization’s website, stephensbackpacks.com