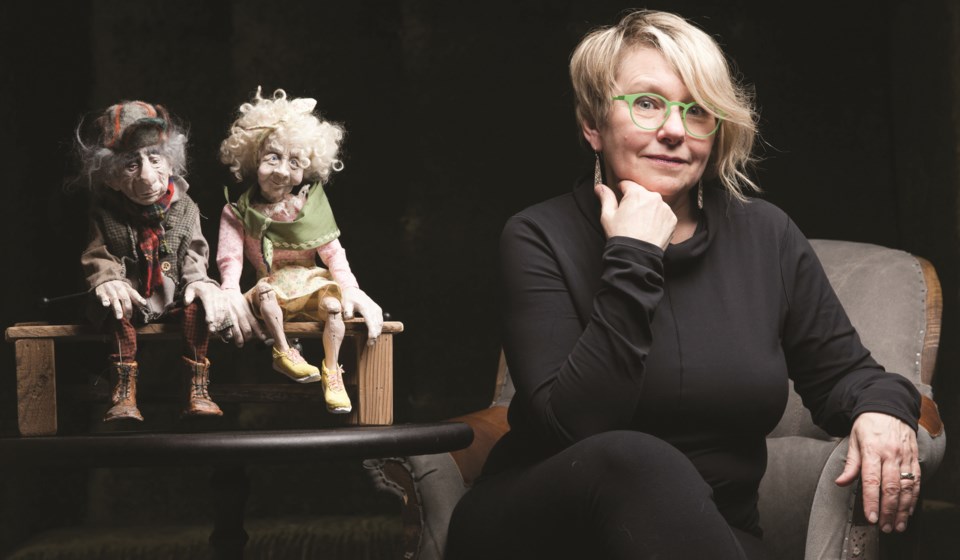 Local puppeteer Juanita Dawn is staging a production of her original show The Bench in Calgary Nov. 1 and 2. File Photo/ Rocky View Publishing

A Springbank puppeteer hopes upcoming performances of her original piece The Bench will cause audiences at four Calgary shows to contemplate the value of community and fixtures often taken for granted.

Juanita Dawn, and her creative partner Monica Ila, will offer performances at C-Space Theatre Nov. 1 and 2. According to Dawn, the show balances its heavy subject matter with humour.

“I hope that people will get a kick out of it and get a laugh, but also have a really poignant moment at the end where they think, ‘What is going on in our communities?’” Dawn said.

The production focuses on a homeless man sleeping on the bench, and a woman in a nearby condo unit who tries to rally her neighbours to push for the bench’s removal.

“Meanwhile, while she’s working on this campaign to have the bench removed, all the other people of the community are coming to use it,” Dawn said. “There are kids, and old people and dates set up. We even have a corny little thing about two spies coming in and exchanging a suitcase.”

By asking the question of how benches serve as community spaces and who is allowed to use them, she said, the show examines themes of community and tolerance.

The idea for the play, Dawn said, was inspired by the removal of benches from cities throughout Canada and the world to prevent homeless people from sleeping on them. A 10-minute version of The Bench was debuted at a festival in Montreal and performed again in March at Calgary’s Animated Art Festival. The current version of the production is a 30-minute nonverbal piece, she added, which is ideal for puppet shows.

The puppeteers have also partnered with Inn from the Cold, she said, and plan to donate $2 from every ticket sale to the Calgary organization. Attendees will also have an opportunity to make a special donation towards new underwear that Inn from the Cold will distribute.

“They were very receptive to our concept,” Dawn said. “They were thrilled to get involved with [the show].”

The Bench will be performed at 7 p.m. both nights of its run, with two additional performances at 1 p.m. and 3 p.m. on Nov. 2. Tickets cost $28 plus fees, and are available at brownpapertickets.com by searching “The Bench.”

Dawn’s show is presented as a double bill, and audiences will also enjoy a production of Jupiter Theatre’s Four, which “blends mythology and contemporary social issues through movement and text,” using the four horsemen of the apocalypse, according to theatrejupiter.com

Dawn added the show is recommended for children 14 years old and up.

“We put that in there, because when people see puppets, they assume immediately it’s a children’s show,” she said. “There’s nothing untoward that a child can’t see, but I think that a six-year-old won’t get that much out of it.”