Show gives Valentines something to laugh about 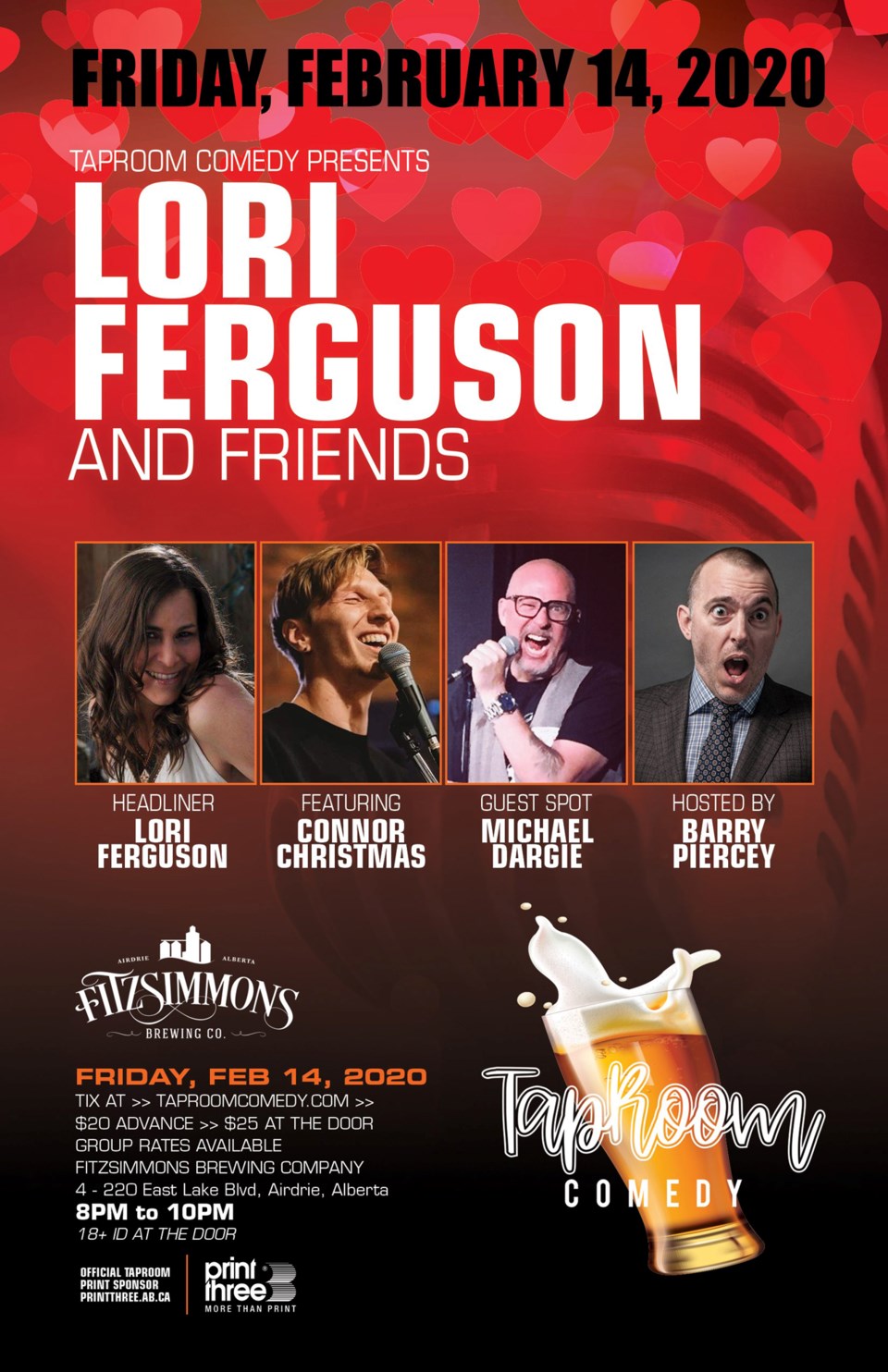 Those looking for a laugh on Valentine's Day are in luck, as Taproom Comedy presents Lori Ferguson-Ford and Friends at Fitzsimmons Brewing Company. Photo Submitted

Valentine's Day is typically a day of romance – roses, chocolates and fancy dinners out. However, not everyone is looking for an evening of over-the-top gestures of love, and Taproom Comedy is offering Airdronians the chance to let loose and have a laugh this Feb. 14.

"If you're a very young couple in love, go do something fancy," said Barry Piercey, Taproom Comedy producer and host. "If you're single, or you're married, and you really don't give a rat's rip about Valentine's Day, this is where you want to come."

The show at Fitzsimmons Brewing Company will feature headliner Lori Ferguson-Ford along with Connor Christmas and Michael Dargie.

“We've got Lori, who I believe is divorced; I've been married for 20 years; Dargie is divorced but now living with someone; and Connor is single with a girlfriend," Piercey said. "So we've got a good spectrum of relationships covered."

Ferguson-Ford has been a professional stand-up comic for more than 20 years, according to funnybusiness.ca, and has toured across Canada and the United States. She has made appearances on CTV, CBC, WTN and The Comedy Network, as well as CBC Radio’s Madly Off In All Directions.

A fan of Ferguson-Ford's himself, Piercey said he had been wanting to book her for a while and the timing for a Valentine's Day show worked out perfectly.

"It was actually Lori's idea to say, 'No, we can easily do a show on Valentine's Day and tailor some of the material towards that and relationships and that kind of stuff,'" he said.

Christmas is an up-and-coming comedian from Calgary who will be making the move to Toronto in March, Piercey said, "which seems to be the way it goes" for rising talents in the comedy world.

"[He's an] absolutely fearless comedian," Piercey said. " I don't think I've ever seen him get fazed on stage."

“Stand up's a new animal to him, but he's definitely got the basis in there,” Piercey said.

Though Taproom Comedy has been presenting shows since March 2018, Piercey was a bit hesitant to put on a Valentine's Day special.

"I was a little worried initially because not only is it Valentine's Day, but it's a long weekend as well. And those can be hit or miss when you're planning a comedy show," he said.

“But, sure enough, the sales so far for the show have been phenomenal.”

It has been so well received, Piercey said the show is "closing in on being sold out," which opens up the opportunity for a second performance should there be enough interest.

"[Current ticket sales are] unheard of at this point," he said. "Normally, two weeks prior, which is kind of where we are now, I've got a handful of tickets sold...but this one kind of seemed to take a life of its own and spike right up quickly."

Though the show is open to minors, they must be accompanied by a legal guardian and Piercey doesn't recommend the event for anyone under the age of 16.

"Unlike if you're at a corporate event or something...I don't get a content restriction on the comedian. So I can't guarantee that it's suitable for an 11-year-old," he said.

Piercey added he is toying with the idea of offering pizza at the event, but even if the aroma of 'za isn't filling Fitzsimmons Brewing Feb. 14, the venue will be offering plenty of its specialty.

“They've got literally award-winning beer that they make there," he said. "It's insane when you think of how many awards they've won for their different beers, for just a craft brewery in Airdrie.”

General admission cost $20, but groups of eight or more can purchase tickets for $15 each. Visit Taproom Comedy on Facebook for tickets.