Grade 10 students from one of Rocky View Schools’ (RVS) alternative learning programs have been putting their new construction skills to work this month, while helping out a local non-profit society at the same time. Since Feb.
Feb 17, 2021 7:00 AM By: Scott Strasser
Previous Next
Rocky View Schools students in the division's Building Futures program are helping construct animal shelters at the Alberta Pound and Rescue Centre's new facility in Airdrie.Scott Strasser/Airdrie City View
Expand

Grade 10 students from one of Rocky View Schools’ (RVS) alternative learning programs have been putting their new construction skills to work this month, while helping out a local non-profit society at the same time.

Since Feb. 8, students in the RVS Building Futures program have been helping construct shelters and habitats for animals at the Alberta Pound and Rescue Centre's (APARC) Airdrie warehouse, located at 2 East Lake Way NE.

Building Futures is an alternative program in which Grade 10 students from RVS spend the school year supplementing their core curriculum by building a house from scratch, under the tutelage and supervision of professional tradespeople. According to Laura Burt, a teacher with the program, Building Futures is partnered with Airdrie-based McKee Homes. “That partnership affords us some unique opportunities to get involved in the community, sometimes in ways a regular school program might not have the same access to,” she said.

At the beginning of the school year, Burt said the students brainstormed some local community organizations they could get involved with this year, in addition to their house-building project in Bayside, and APARC came up as an example. The animal pound and re-homing organization, which also has a location in Medicine Hat, opened its second facility in east Airdrie in April 2020.

“The students had expressed an interest in doing a fundraiser or something like that to raise some money for the shelter,” Burt said.

“When [APARC] got back to me, they said they were 100 per cent in favour of doing a fundraiser. But what they really needed help with was finishing off the renovations in their warehouse in order to have animals in the space. They’d been there not quite a full year and had built two rooms in that time, so there was quite a bit more to do.” 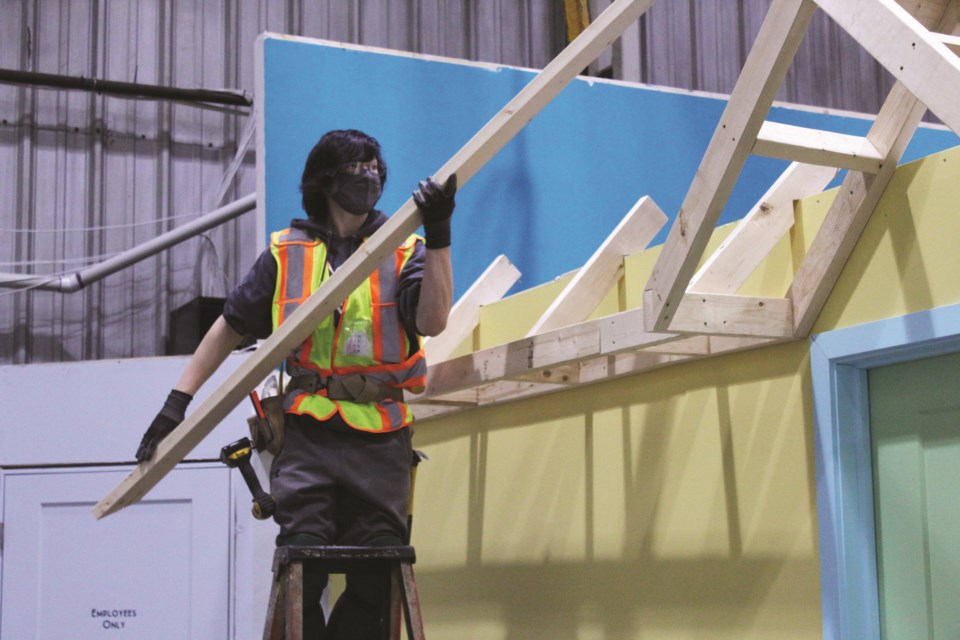 Students in Building Futures learn various trades-related skills and how to work with tools throughout their Grade 10 year. Photo by Scott Strasser/Airdrie City View

After the project idea received the go-ahead from McKee Homes, Burt said she and some of her students scouted out APARC's warehouse in January, to get a sense of the site and meet the members of the non-profit society in person.

“When we got there…it was all concrete floors – nothing was up,” Burt said. “They’d marked tape on the floor where they wanted the rooms put in, with rough dimensions. The group of kids I took did all the measurements and we drew out a rough map of the place.

“We thought this was perfect – we’d be in a 4,000-square-foot warehouse putting up these walls and helping a non-profit organization in our community. We'd be putting together all these skills the students had started learning before we transitioned back to online learning in December.”

The students got to work on Feb. 8, building the wall frames that will section off APARC’s warehouse into separate rooms for cats, dogs and other animals. They also designed a play-area at the back of the warehouse, according to Burt, where the animals will be able to exercise when it's cold outside and prospective adopters can play with them. 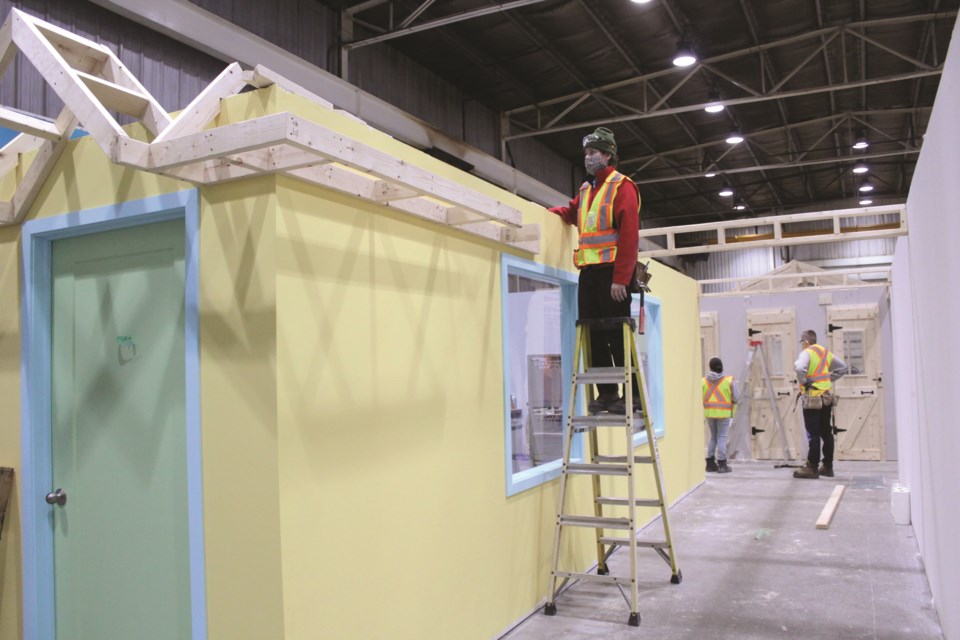 Building Futures students have been working on-site at the Alberta Pound and Rescue Centre since Feb. 8. Photo by Scott Strasser/Airdrie City View

Fifteen-year-old Alondra Landeros was among the students hard at work on Feb. 12. She said she has enjoyed the opportunity to take part in Building Futures this year.

“I really like the program,” she said. “It’s very hands-on and very appointed to your learning needs – not just in a classroom setting, but learning in real-life scenarios.”

Landeros said she joined Building Futures to get out of her comfort zone and expand her real-world skills. While she said she doesn’t intend to pursue a career in the trades, learning how to work with tools and in a team setting has been an invaluable experience.

“I’m not really someone who likes to get their hands dirty and do construction, so that was something I really wanted to give a try to expand my horizons,” she said. “Something I’ve learned is how to work in a team and have an open mindset to other ideas and how to mix and match our ideas to create a bigger picture.” 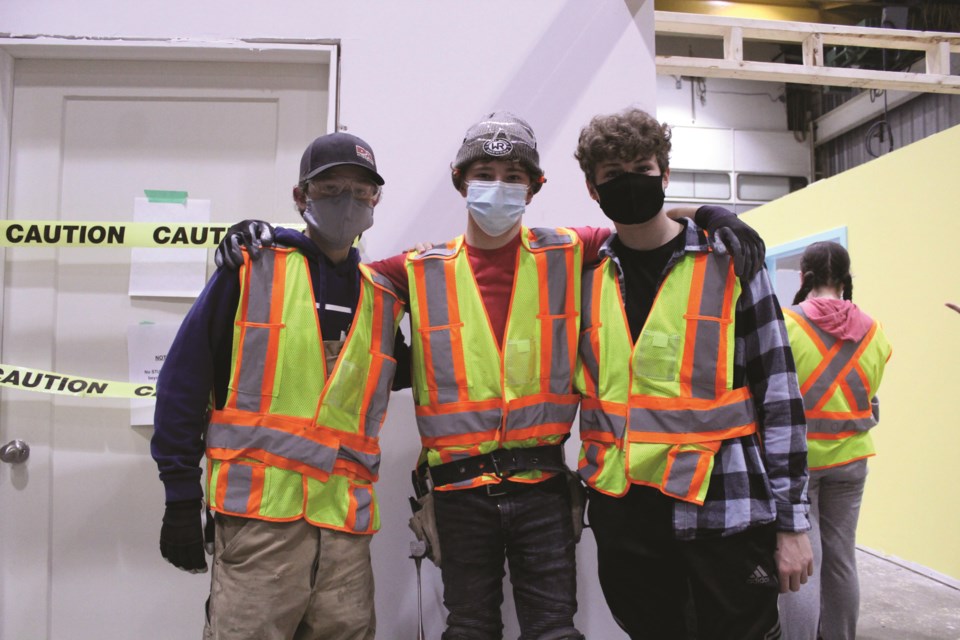 APARC’s assistant manager, Chynna Short, said the charity has been incredibly appreciative of the support from Building Futures this winter.

“Some of the students were actually off school [on Feb. 11] and still decided to come in and work with us during their free time,” she said. “When they started, that entire section was empty except for the two main rooms. They’ve built the whole back of the shelter very fast.”

The students finished framing on Feb. 12, just in time for the long weekend. After a break from school due to teachers convention this week, Burt said the students will continue the project by drywalling, mudding and taping the walls next week. 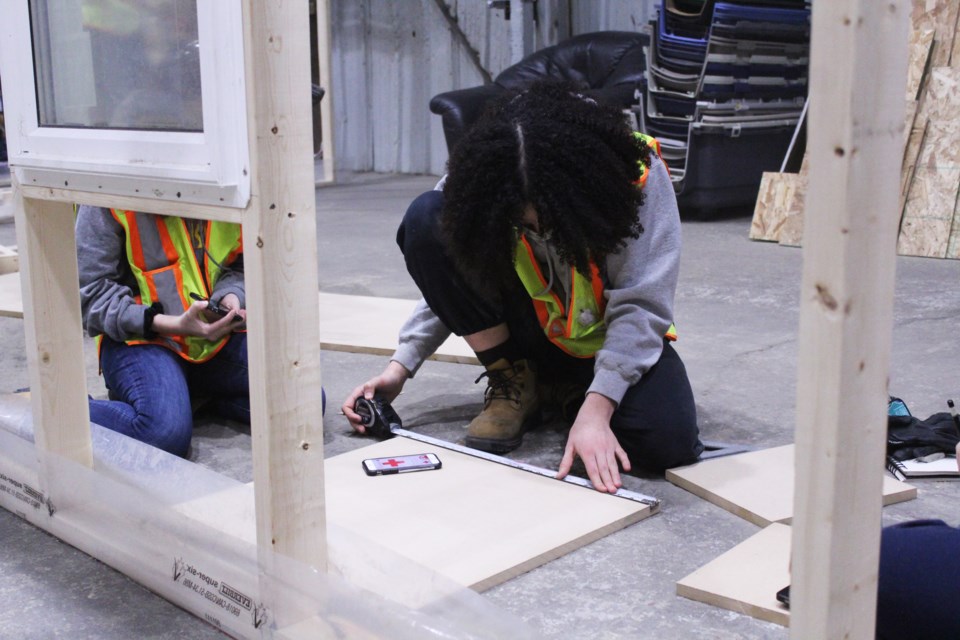 Students measure a board on Feb. 12. Photo by Scott Strasser/Airdrie City View

Then, they will wrap up the month by painting the newly built walls.

“The experiential learning part of it is fantastic,” she said. “Whatever project we take on in addition to the home-building we do, the students get so much real-world experience and the opportunity to leave behind legacy projects. It’s special in that way – you can leave something behind that has an impact.”

“It was really this massive group effort to come together and pull this off in a short amount of time,” she said.