A public art program to provide seating in Airdrie’s parks and communities is back for another year, according to City of Airdrie Community Developer Kim Harris.
0
Aug 9, 2018 12:01 AM By: Airdrie City View 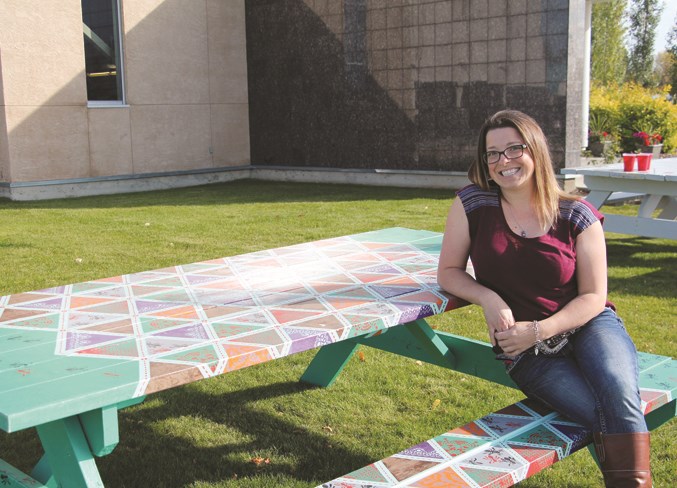 Melissa Bruglemans-LaBelle painted a picnic table in 2016 as part of a project initiated by airdrieFest in 2015. This year, the project has been expanded to include park benches, which will be placed all over the city.

A public art program to provide seating in Airdrie’s parks and communities is back for another year, according to City of Airdrie Community Developer Kim Harris. “We thought it would be really neat to do 30 benches and put one in each [residential] community,” she said. “We have 30 artists painting a bench each.” The benches will be unveiled at airdrieFEST, Sept. 7 and 8. “One will be painted right at airdrieFEST, for people to come and watch and see how the magic happens,” Harris said. “It’s contemporary art that’s also place-making. It started because we had food trucks at airdrieFEST and we wanted people to have a place to sit down.” The artists include some well-known names, including Veronica Funk, Brenna Miller, Melissa Bruglemans-LaBelle and Shawnee Hoffman. There are some surprising names on the list as well – Michelle Pirzek from the Airdrie Festival of Lights Society is painting a bench, as is Karen McDonald from Ladies Out Loud and the Airdrie Film Festival. The artists are being asked to use a Canadian heritage theme in their work. Harris said the City’s hope is the benches will be used once they are installed in the communities – but if they are damaged, she added, they will not be replaced. Volunteer Airdrie partnered with the City, Creative Airdrie and the Airdrie Regional Arts Society to find the artists to paint the benches, according to Harris. “It was relatively easy for me to get the word out on our social media,” said Dave Maffitt, chair of Volunteer Airdrie. “There was lots of interest. We managed to place all 30 benches with artists.” All of the artists – save one who lives in northwest Calgary – are from Airdrie, and Maffitt said he’s been busy delivering paint and the benches throughout the last couple of weeks. Maffitt said he’s hoping to put together a people’s choice competition at airdrieFEST. “We’ll have different categories and people can vote on their favourite from different perspectives,” he said. Approximately 60 volunteers are still needed to help with Music on Main concert event during airdrieFEST, Sept. 7, Maffitt added. The event – new this year – will feature a performance by a well-known band, food trucks and a beer garden set up and managed by Main Street BBQ that will serve Fitzsimmons beer. If you’re interested in helping, visit volunteerairdrie.ca