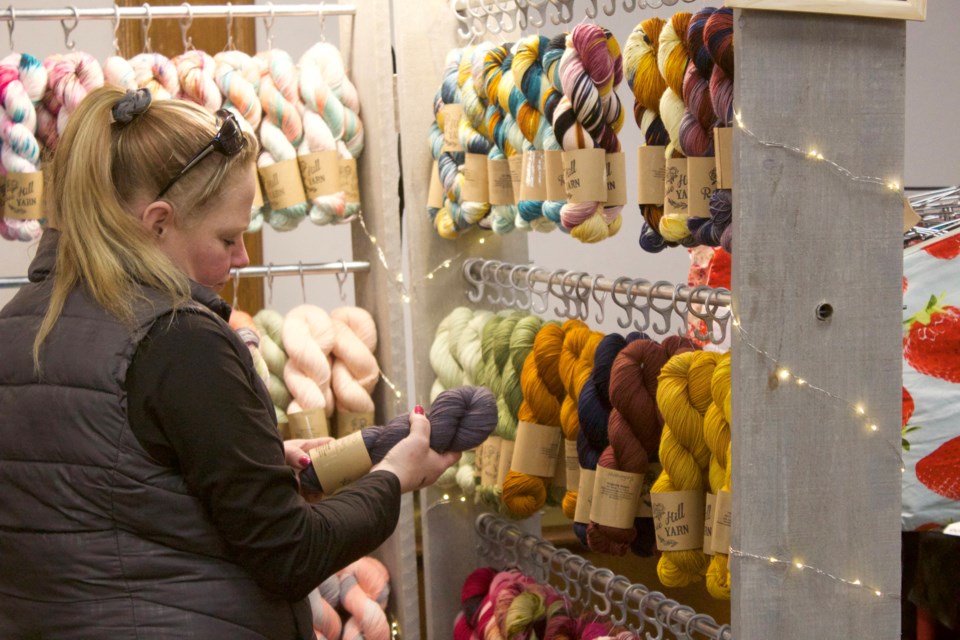 After a highly successful inaugural event in 2019, the Creekside Yarn Festival will return for its second year Jan. 25 File Photo/Airdrie City View

Knitting and crocheting enthusiasts will once again be able to browse and purchase hand-crafted materials Jan. 25, when the Creekside Yarn Festival returns to the Town and Country Centre (T&C) for its second year.

“It’s just so fun,” said yarn-dyer Shelley Dupont, who co-hosts the festival with her mother and fellow yarn-dyer Penny Heptonstall. “It’s just amazing and you’ll be blown away by a yarn festival.”

Dupont and Heptonstall organized the inaugural festival in January 2019 and were surprised by its success. According to Dupont, the event exceeded her expectations.

“We had quite a big turnout,” she said. “First of all, we sold out the big hall of vendors, and we had a waiting list of vendors that wanted in. We didn’t even know we would get that kind of response.”

Additionally, more than 400 people trickled through the yarn festival throughout the day, Dupont said, with many vendors selling out of their stock early on. She noted she would have been happy if 100 people passed through.

Dupont attributes that success to a resurgence in crocheting and knitting, suggesting many people who had set down their needles to other responsibilities have recently picked them up again.

In anticipation of the same attendance, Dupont said, additional vendors will be on hand this year – beside the main hall, organizers have also booked a smaller room at the T&C. Still, the 2019 iteration of the festival sold out of vendor spots within the first day. Thirty-five vendors will be on-hand at the event, selling hand-dyed yarn, project bags and wool that can be spun into yarn.

An area for attendees to sit, knit and socialize has also been expanded, Dupont added.

“People like to come, and they stayed and visited all day,” she said. “We wanted to make sure there was enough space for them to come and stay and hang out and get to know the vendors and each other.”

Admission costs $5, and snacks and beverages will be available to all attendees. The event runs from 10 a.m. to 4 p.m.

According to Dupont, the mother-daughter team wanted to create an event that catered to local makers. Several similar markets occur throughout the province and in the region, and Dupont said they wanted to bring one to Airdrie.

Speaking from experience, she added, many people might not be familiar with the broad range of hand-crafted materials available to yarn-enthusiasts.

“We went to a few festivals first, ourselves, before we started dyeing, and we were just blown away by the options that are out there,” Dupont said. “It’s different than any other yarn that you could find at Michael’s or Walmart or any big-box store. We just had to be a part of it.”

The festival gives all levels of knitters and crocheters, whether beginners or veteran, the chance to talk to the people behind the materials they’re buying, and gain greater insight into the products, Dupont said, while also supporting small, local vendors.

“I think it’s important to support your community and support your local makers, and just see what’s out there that’s local to us – the sheep and the mill and everything else, it could be in your backyard and you just don’t know it,” she said.