Organizations, schools and youth advocacy groups throughout Airdrie will be awash in pink Feb. 27 during the 13th annual Pink Shirt Day – an annual, nationwide movement to promote anti-bullying and bullying awareness.
0
Feb 21, 2019 12:01 AM By: Scott Strasser 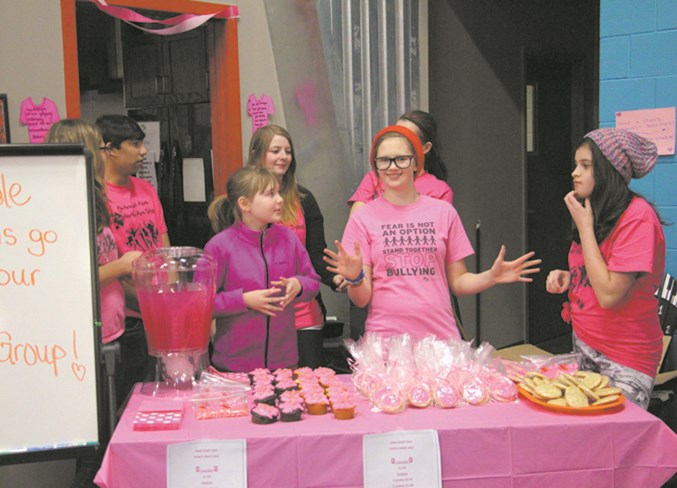 Pink Shirt Day T-shirts will be sold through the Boys and Girls Club of Airdrie in February and a Pink Party will be held Feb. 27 at the Centre.

Organizations, schools and youth advocacy groups throughout Airdrie will be awash in pink Feb. 27 during the 13th annual Pink Shirt Day – an annual, nationwide movement to promote anti-bullying and bullying awareness. The Boys and Girls Club of Airdrie (BGCA) will be kept busy throughout the week, selling pink T-shirts with the slogan “Paint the world with kindness” on them. The slogan, entered by students at Kathyrn School, was this year’s winner in BGCA’s bi-annual Pink Shirt Day contest, according to BGCA Manager of Events and Volunteers Jessica Nash. “We printed off a bunch of [the T-shirts] and sell them out of our centre for $7.50 a shirt,” she said. “All of the schools got an order form, as well, to order them.” Nash added the proceeds from the T-shirt sales will go towards BGCA programming for youth and children’s services. Along with the shirt sales, Nash said, the BGCA Centre will host various pink-themed events and will be distributing pink-coloured snacks during the week of Feb. 27. As a victim of bullying herself when she was a child, Nash said she feels it’s important to promote messages of anti-bullying throughout the city. “Growing up and overcoming the traumas that come with being bullied is really hard,” she said. “Now, my daughter is six, and I want her to know that she can stand up for herself and not have to take bullying from kids, whether they’re from her school, or older or online.” Considering how bullying has evolved throughout the years to include cyber-bullying, Nash said it’s more crucial than ever to put a stop to it. “Back when I was in elementary school, it was just kids on the playground. But now, kids are subjected to it online,” she said. “It’s really terrible and there are so many terrible things that come along with bullying. We want to make sure the community knows we don’t put up with it and we plan to stop it.” Rocky View Schools (RVS) will also take part in Pink Shirt Day through a myriad of events and programs. Schools throughout the district will have plenty of pink-clad students and teachers roaming the halls Feb. 27. “It is everyone’s responsibility – students, school staff and families – to work together to stand up against bullying and discrimination,” said Mental Health Capacity Building (MHCB) Program Co-ordinator Jodi Neetz in a statement. According to Neetz, schools across the division will hold assemblies about bullying awareness and education for students and staff, and student groups and leadership classes will organize school-wide learning opportunities, such as Learn at Lunch classroom presentations. “Especially in small and isolated communities, it is important to promote resiliency in children and youth,” she said.