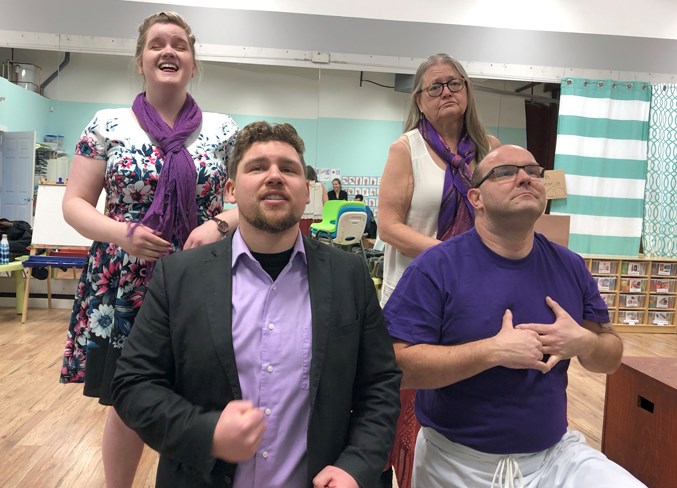 The cast of &#8216;All In The Timing&#8217; has been hard at work rehearsing since January, according to director Robin McKittrick.

Just in time for Valentine’s Day, Nose Creek Players is hosting a dessert theatre Feb. 9 at 7 p.m. at Bert Church LIVE Theatre. According to Robin McKittrick, president of Nose Creek Players Association, the production of All In The Timing – a series of six comedic one-act plays written by American playwright David Ives – promises to be a great early Valentine’s date. “I think any time you can support locally, it’s a great opportunity to go with someone that you love, to relax and have an opportunity for some libations and nosh,” he said. The six plays are linked by an exploration of the power of language and its impacts on relationships, McKittrick said. The first play, Sure Thing, focuses on first interactions and what would happen if a person got a do-over on a first impression, while Words, Words, Words follows three monkeys in a laboratory tasked with reproducing Hamlet, without knowing what Hamlet is. Another of the vignettes, Universal Language, centres on an insecure young woman who decides learning a new language will boost her confidence. Nose Creek Players hasn’t performed the production before – although McKittrick, who is directing the plays, has acted one of the parts in the past. "I actually did this production way back in the days of yore, 1997,” McKittrick said. “It’s fun to have been involved in it on the stage and kind of behind the scenes, now.” Since rehearsals for the production started in January, “a lot of committed, diligent work,” has been put in by the eight-person cast and the crew, McKittrick said. The play will feature a number of familiar faces and some actors new to Nose Creek Players. “It’s been great to be involved with people that are so passionate about the art and really dedicate themselves to it,” he said. The play will be staged in the lobby of Bert Church LIVE Theatre, which McKittrick said provides some distinct challenges compared to mounting a production on the stage. “You have to be mindful of the set – it can’t be something that’s overly elaborate,” he said. “Something like this, you need to really focus on the art of acting and engaging the audience that way and making the connection, because you don’t have the giant stage and the beautiful sets and the elaborate lighting systems.” Performing in the lobby makes for an intimate production, and McKittrick said the play can only accommodate around 70 people. This production is also the first time Nose Creek Players has offered a dessert theatre in several years, McKittrick added. Squares and cookies will be served during an intermission, and are included in the cost of admission. Tickets cost $22.50 and are available at nosecreekplayers.com McKittrick said the plays are geared towards mature audiences – due to strong language, attendees must be 16 years of age or older.