A bridge deck in Nose Creek Regional Park has been painted purple as a memorial and symbol of awareness for those affected by accidental drug overdoses.

Lauryn Heintz
Oct 15, 2021 10:00 AM
Previous Next
1 / 1 The newly-painted purple bridge deck in Nose Creek Park is covered with frost on a chilly fall morning. Lauryn Heintz/Airdrie City View
Expand
Previous Next
Listen to this article
00:02:37

A bridge deck in Nose Creek Regional Park has been painted purple as a memorial and symbol of awareness for those affected by accidental drug overdoses.

Cheryl Bulloch, who lost her 19-year-old son to a fentanyl overdose last November, was one of the Airdrie residents involved in the project. She was also part of the team that organized an event in the park for International Overdose Awareness Day in August.

“We just wanted to create awareness and have people be able to go somewhere where they could – if they’ve lost a loved one – feel some comfort at that bridge,” she said.

The project began as a small idea among women advocating on behalf of their lost loved ones, according to Bulloch.

During the July 5 meeting, Airdrie City council voted to proclaim Aug. 31 as International Overdose Awareness Day in the city. During the Aug. 16 meeting, council unanimously supported the hosting of an event on Aug. 31.

Bulloch said that a few weeks ago, the deck of the first bridge in the park was painted by Bulloch and other members of the Airdrie’s Hope for Healing organization. The bridge is located on the pathway that approaches the south end of Main Street, near the pond and the amphitheatre.

“It wouldn’t have as much meaning if we had someone else do it,” she said. “The three of us, we had this idea, and we wanted to follow it through all the way.”

She added she hopes the painting of the bridge will spark conversation about addiction and overdose, as well as open up space for growing awareness of the opioid epidemic in Canada.

“I’ve also had several people message me and tell me that they’ve taken their kids over the bridge and they’ll ask their parents, ‘Why is this bridge purple?’ And then, you know, it opens up the lines of communication, which I think is very necessary,” Bulloch said.

She added mental health should be involved in discussions around addiction and overdose awareness, explaining that both issues have a large stigma attached to them.

Bulloch also explained that the illness is no different than other ailments, such as cancer, and that individuals don’t choose to use. She said her late son Jacob had severe mental health concerns and was repeatedly ignored by professionals due to his drug use.

“Most of the time, people that are using are not getting the [mental health] supports that they need,” she said. “They’re not being heard.

“These people are suffering, and they need understanding,” she continued. “We want people to stop judging.”

Bulloch, along with Julie Hazelwanter, Kim Risler, and Samantha Ginter would like to thank everyone who has supported their initiative from the beginning, as well as contributed to the success of the overdose awareness event that was held on Aug. 31. 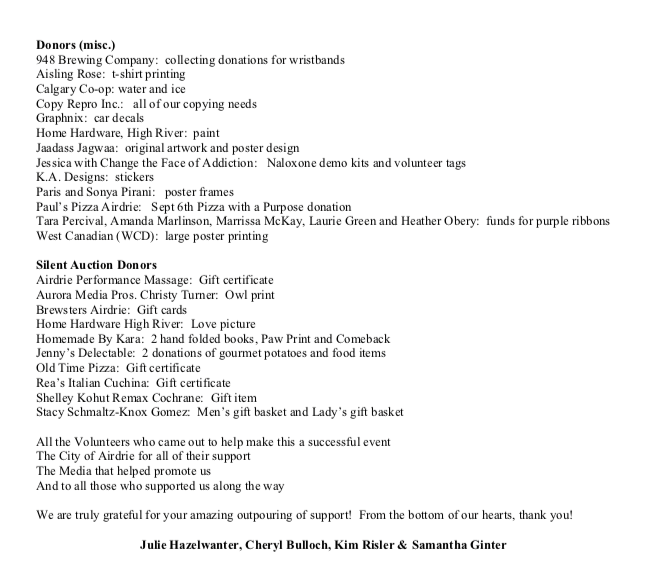 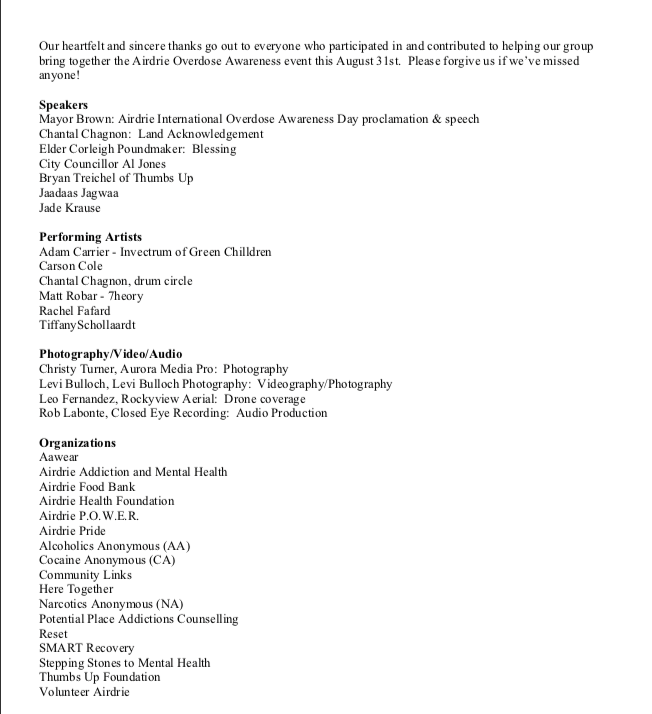