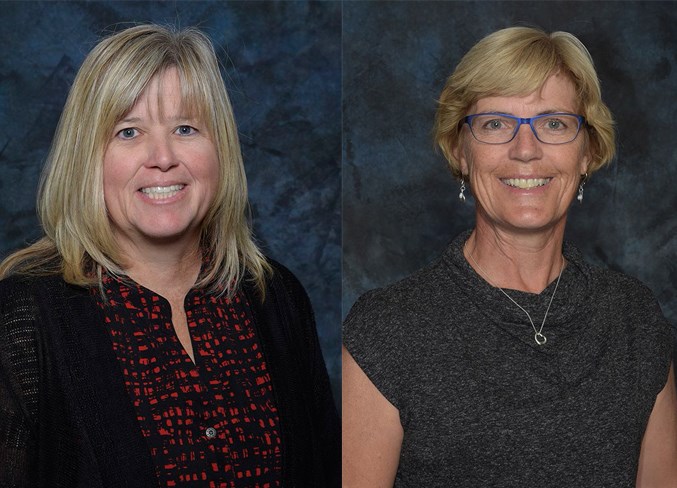 Anne Kromm (left) will be leaving Manachaban School in August to take on the role of principal at Cochrane High School. Mary Magee (right), currently assistant principal of Mitford School, will step in at Manachaban as acting principal. Photo Submitted/For Rocky View Publishing

Following a July 4 Rocky View Schools (RVS) announcement that Ed Polhill would be leaving Cochrane High School to take on Director of Learning Services with the school board, Anne Kromm was appointed principal of the school.

Cochrane High's new principal brings 27 years experience to the role, according to the RVS release, having served as a teacher, assistant principal and principal for RVS, as well as a teacher for the Fort Vermillion School Division, the Willow Creek School Division and the Calgary Board of Education. Kromm joined RVS in 2011 and became assistant principal of Cochrane High School in 2013, according to the division, then moved to Airdrie's W.H. Croxford High School before moving into her first principalship at Manachaban in 2017.

"A member of the Superintendent Design Team on Instructional Design, Kromm has earned a reputation for building school cultures where parents, community and staff work together to ensure students achieve their potential," the release states. "Committed to fostering evidenced-based practices and the use of data to drive performance, Kromm also is known for developing inclusive learning environments that embrace diversity through exploring different perspectives and ideas to create an understanding of people, ways of knowing and ways of being."

Magee is described in the release as a veteran of RVS, and has worked as a teacher and assistant principal in the jurisdiction since 1999, serving the school communities of Mitford, Springbank Middle and Banded Peak.

"In her time with RVS, Magee has championed physical literacy, as well as literacy and numeracy, emergent technology and alternative programming that takes learning outside the classroom and promotes environmental stewardship," the release read. "She also has dedicated significant time beyond the school day coaching athletics, mentoring student teachers and co-ordinating enrichment activities."

Magee sits on RVS’ Superintendent Design Team on Professional Learning and, according to RVS, holds a master of arts in leadership and administration from Gonzaga University, a bachelor of education from the University of Calgary and a geological certificate from SAIT.