the slip works by attaching it to the dock, which keeps the kayak in place so that lake users can get into their boats without it tipping.
Jul 2, 2021 1:00 PM By: Lauryn Heintz
Previous Next
John Timmermans all suited up to go for his daily kayak on Chestermere Lake. Laura Timmermans
Expand

When the sun is shining, and the temperature is warm, 87-year-old John Timmermans will go down to the underground parkade of his Bay Club apartment in Chestermere and pick up his red kayak. Secured upon a wheeled cart and partnered with his matching red lifejacket, he drags the cart behind him out of the parkade, past his building and around the north side of the Chestermere City Hall to the lake’s waterfront.

Timmermans said he spends anywhere from two to three hours a day on the lake, as long as there’s not too much wind or rain.

He has always been very active, according to his daughter Laura Timmermans, as he would skate and curl in the winter and bike, walk and kayak in the spring and summer. 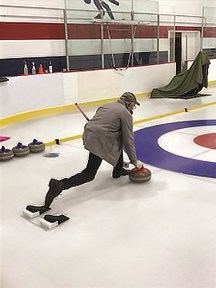 To keep up his activity level across all seasons, Timmermans would curl in the winter.

Kayaking was something Timmermans and his late wife Donna did together right up to her passing – even though she wasn’t always the biggest fan of the activity, Laura said.

“Dad liked it right away, but she hated water – neither of them swam,” Laura explained.

As a result, Donna would often sit on the deck of Laura and her husband Ian’s Chestermere Lake property and wait patiently for her husband to return from his daily adventure. Donna, who was suffering from dementia, would become worried and anxious, not knowing how long Timmermans would be gone. Sometimes she would even wander the shoreline to find him.

In hopes that Donna would agree to accompany Timmermans on his journeys as a way to calm her nerves, Laura said the family decided to purchase a double kayak. It took persistence and pestering, but she said her mom eventually gave in.

“Finally, one day, she relented and said ‘fine, go get the lifejacket! What are you waiting for?’ And off we went,” Laura recalled. 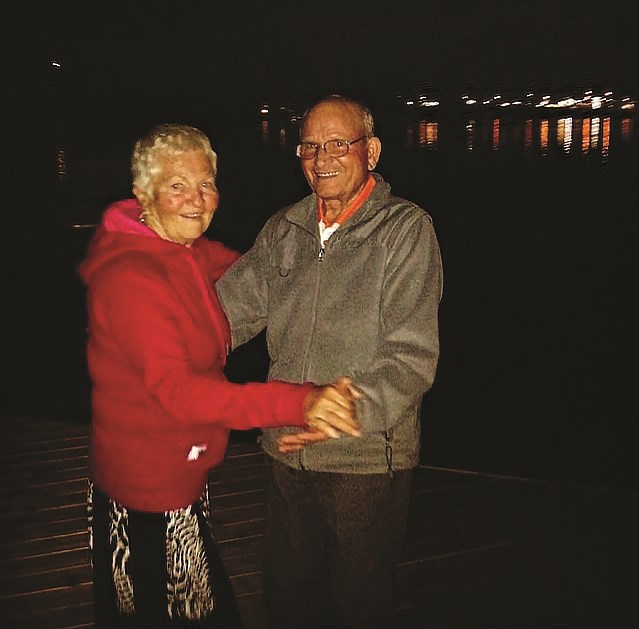 John and Donna TImmermans dancing on their daughter and son-in-lawâs dock on Chestermere Lake for their wedding anniversary.

After that, the couple went kayaking on the lake every day – sometimes multiple times a day, as Donna’s dementia meant she would not always remember the day’s earlier rides. For Timmermans, it was a way to calm down, relax and float away from the stress of being the caregiver for his wife.

After Donna passed away in December 2017, Timmermans continued to stay active by walking or riding his bike every day and kayaking on Chestermere Lake when the weather cooperated.

However, as his age increased, Laura said she was concerned about her father’s ability to get in and out of his kayak safely. After consulting with and receiving approval from the City of Chestermere, she said her family eventually purchased and installed a ‘kayak slip.’

According to Laura, the slip works by attaching it to the dock, which keeps the kayak in place so that Timmermans can get into the boat without it tipping. The bar allows him to lower himself into the seat, as well as pull himself back up and out when he returns from his daily paddle.

The slip can be found on the north side of Chestermere Lake’s floating dock at John Peak Memorial Park and is available for anyone to use, free of charge. Laura said the City is planning to put a sign up at the dock that explains how to use the slip so that anyone with a kayak, canoe, or paddleboard can make use of it.

Laura also said that she hopes the newfound accessibility to the water will help her dad make a new friend to spend time with while paddling out on the lake.

“Hopefully someone will join dad and say, ‘Hey, that looks fun. I’ll go with you’ – regardless of age,” Laura said.

Timmermans wants people to know that keeping active is important at any age, but especially once you start to get a bit older.

“You’ve got to keep busy to keep going,” he said.

He added that it’s pretty simple for him to keep moving, as the physical activities he enjoys usually remind him of his beloved Donna.

“So far, I’m in pretty good shape – I can do just about anything that I used to do 50 years ago,” Timmermans recalled.