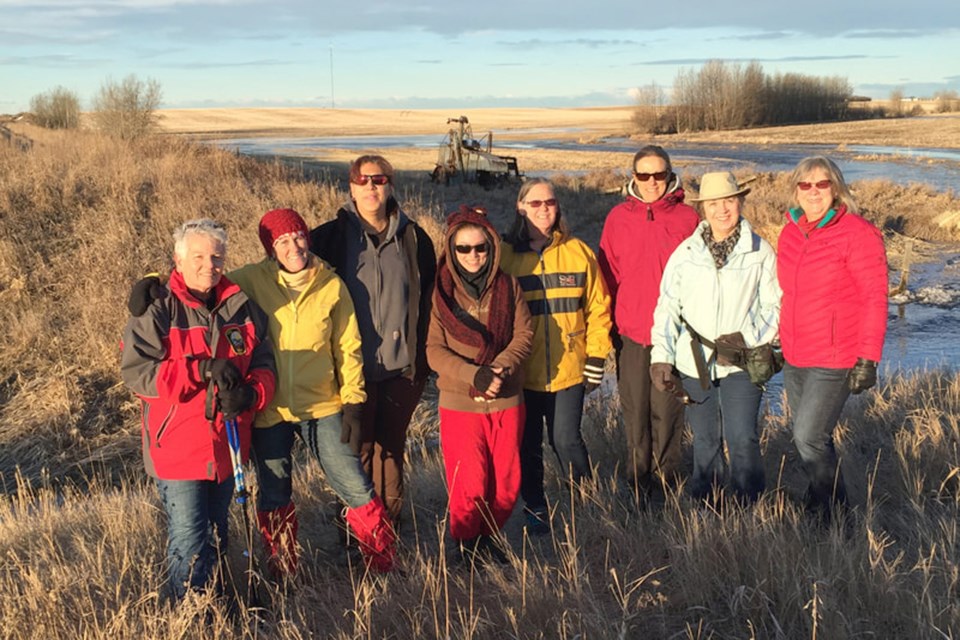 Members of the Meadowlark Society stand along a portion of the future trail connecting Irricana and Beiseker. The group received a development permit from Rocky View County June 25, allowing them to install two bridges and a culvert along the trail. File Photo/Rocky View Publishing

Initial work on Meadowlark Trail – which will connect the communities of Beiseker and Irricana – can begin, following a unanimous decision by Rocky View County (RVC) council at a regular meeting June 25 to grant the first of two development permits.

“We were very pleased,” said Jeannette Richter, chairperson of Meadowlark Trail Committee. “We asked the County to look at that last September, so we’ve been waiting for nine months now to have it come back to council.”

Once complete, Meadowlark Trail will be a 10-kilometre recreational pathway, Richter said, which will connect the two communities by running along a former branch of the Canadian Pacific Railway that is now owned by Alberta Trail Net Society. She added the trail will be maintained by a group of volunteers from the two communities.

The approved development permit will allow for the construction of two pedestrian bridges spanning Crossfield Creek and the Rosebud River, and a culvert across a drainage ditch located adjacent to Beiseker, said RVC senior planner Stefan Kunz.

The group’s application was submitted around the time council approved a redesignation for the trail’s land in September 2018, Richter said. Following the redesignation approval, the committee was required to examine the impact the installation of the bridges would have on the water running beneath, as well as receive permission from the Western Irrigation District for the projects. Those measures were successfully completed, she added.

“This particular development permit only concerns the installation of the river crossings,” Kunz said, adding another development permit would specify the conditions for other features of the trail such as surfacing, screening and fencing, parking and access, road crossings and maintenance.

While the crossings are installed, Richter said the committee will also focus its attention on meeting all RVC’s conditions for the second development permit. This will include determining the location of trailheads, parking and washrooms, Richter said, as well as coming to an agreement with nearby ranchers who will need to drive cattle across the trail occasionally throughout the year. Richter was unable to provide a timeline.

Richter said splitting the development permits “seemed like a logical thing to do,” allowing for the installation of the bridges and culvert to progress while the committee completes the application for the actual trail construction.

“Alberta Trail Net will be asking for tenders from local companies,” she said. “That takes about three weeks. After that, it takes two months to construct the bridges.”

She added the committee anticipates the bridges will be installed by the beginning of October.

“Once the culvert is put in, people will be able to walk from Beiseker to the Rosebud River,” she said. “They’ve been denied that since 1910.”