Running enthusiasts in Rocky View County who want to burn off some Christmas calories will have the chance to do so Dec. 31, during Martin Parnell’s annual walk/run in Cochrane.
0
Dec 25, 2018 12:01 AM By: Scott Strasser 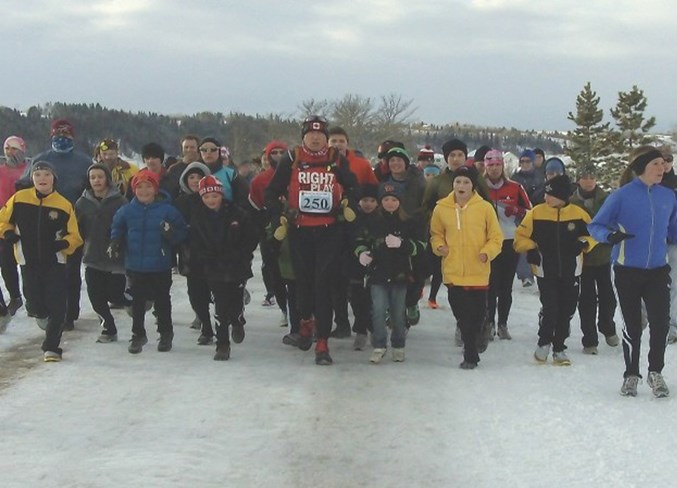 Marathon-runner Martin Parnell holds a walk/run in Cochrane each New Year&#8217;s Eve to raise money for charities around the world.

Running enthusiasts in Rocky View County who want to burn off some Christmas calories will have the chance to do so Dec. 31, during Martin Parnell’s annual walk/run in Cochrane.  Parnell is a marathon runner from England who immigrated to Canada in the 1970s, eventually settling in Cochrane. In 2010, the multiple-world-record-holding runner, author and motivational speaker completed 250 marathons in a single year. Since then, he’s held an annual fundraising run in Cochrane on New Year’s Eve, along the Bow River.  “My very last run [in 2010] was at Spray Lakes,” he said. “Then, people were asking me, ‘Do you have anything planned?’ I don’t know how it came about, but the idea of having this annual run just kind of came up.  “It seemed like a nice idea of celebrating finishing the 250 marathons.” The yearly event isn’t just about running, however. Throughout the past eight years, it’s raised more than $58,000 for charities around the world, according to Parnell’s website. Generally, the event raises between $8,000 and $12,000 per year, he added. Parnell said the run initially supported the children’s charity Right to Play, but has also raised funds for a playground to be built at a kindergarten in Tanzania.  For the last two years, he added, the proceeds have gone to Free to Run – a global organization that empowers and supports girls and women in conflict countries through sport. “We’ve helped a number of girls and women do things like kayaking, camping, ice skating and ice hockey,” Parnell said. “This year, they started a new [running] program for women and girls in Iraq.” The run takes place around a two-kilometre (km) loop along the Bow River, according to Parnell, starting at the Spray Lakes Family Sports Centre and ending at the old trestle bridge. Runners have the option of participating in a full marathon, a half-marathon, a 10-km, 5-km or 2-km run or walk. The generally-sparse collection of marathon runners get started at 9 a.m., Parnell said. At noon, the half-marathon runners join in, followed by the 10-km runners at 1:30 p.m., the 5-km runners at 2:15 p.m. and the 2-km runners at 2:40 p.m. “We start at different times but we all finish together, is sort of the concept,” he said. According to Parnell, the run generally attracts between 130 and 150 participants each year. In 2017, though, he said brutally cold weather cut the attendance in half.  Still, he said, about 70 people still turned up, despite the thermometer registering -48 C with the wind chill.   “The centre allowed us to use the track, but even then, half [of the participants] used the track and 35 of us went outside,” he said. "It was so cold that day that the Calgary Zoo brought the penguins inside.” Those interested in taking part can register and bring their donation the day of the run, or visit bit.ly/2TUNO4F