As people around the world sheltered in their homes because of the COVID-19 pandemic, local Twitch streamer Mitchell George has seen an increase in the number of people tuning in to watch him play video games.
Jul 10, 2020 9:15 AM By: Jordan Stricker 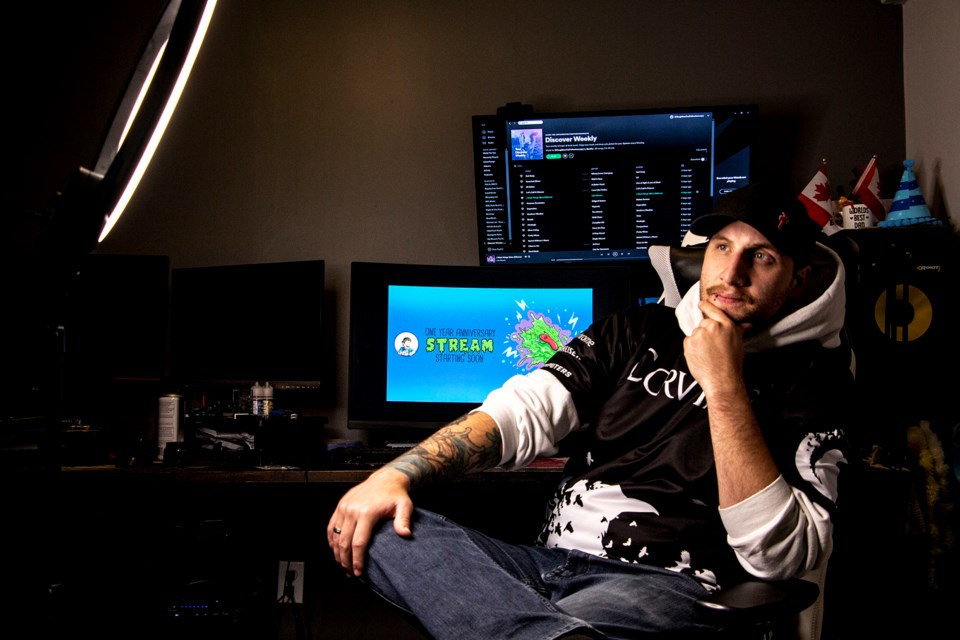 Mitchell George has seen a surge in viewers and followers on Twitch in recent months, as people self-isolated because of the COVID-19 pandemic. Photo by Jordan Stricker/Airdrie City View.

As people around the world sheltered in their homes because of the COVID-19 pandemic, local Twitch streamer Mitchell George has seen an increase in the number of people tuning in to watch him play video games.

“When the pandemic hit, I wanted to provide that safe and supportive place for people,” George said. “The numbers started to increase.”

Twitch is a livestreaming platform where people broadcast themselves playing video games and other activities. George – a filmmaker and creative jack-of-all-trades – has been operating his Twitch stream for two years.

In recent months, he’s noticed an uptick in viewers and subscribers while people were quarantined. Before the pandemic hit North America, George said he was sitting at around 1,000 followers and 200 subscribers. As quarantine took effect, his stream page jumped to 2,000 followers and his subscriber count more than doubled to 500.

“People are looking for something entertaining to do where there is that relationship,” he said.

On Twitch, viewers can pay for monthly subscriptions to gain exclusive access to content from their favourite streamers. Subscription fees start as low as six dollars a month.

The once niche platform has now taken over the Internet. Famous streamers like Tyler Blevins – known by the moniker Ninja – have made millions of dollars through subscriptions and donations, and have signed endorsements with companies like Adidas and Redbull.

When George started his stream two years ago, he averaged five viewers at a time. Lately, he sees between 30 to 50 viewers tuning in concurrently to a given stream. He is also now signed to Australian e-sports team Corvidae as their overseas player and content creator.

George streams under the username GameDadTV. Originally, he planned to start a YouTube comedy series focused on a character by that name.

After drawing inspiration from one of his favourite streamers, he decided to go another direction and use the GameDadTV character on Twitch. Eventually, the character started to resemble George’s real-life persona.

“I sort of cut the character act and started streaming on my own,” George said. “It just sort of took off from there.”

he added his background as a filmmaker and his understanding of film production sets his Twitch streams apart because of their high production quality.

George was among five filmmakers selected as winners of the Telus Storyhive competition and received $10,000 toward a project he pitched in 2017.

“At the heart of everything I just want to tell stories and be creative,” he said. “It’s nice to have both of those avenues.”

George will be holding a charity stream at the end of September, with all proceeds going to the Alberta Children’s Hospital. His streams can be found at twitch.tv/gamedadtv