Although the COVID-19 pandemic has changed the format of a local Multiple Myeloma March, it hasn’t put a damper on a local family’s determination to support one of their own.
Sep 11, 2020 4:00 PM By: Ben Sherick 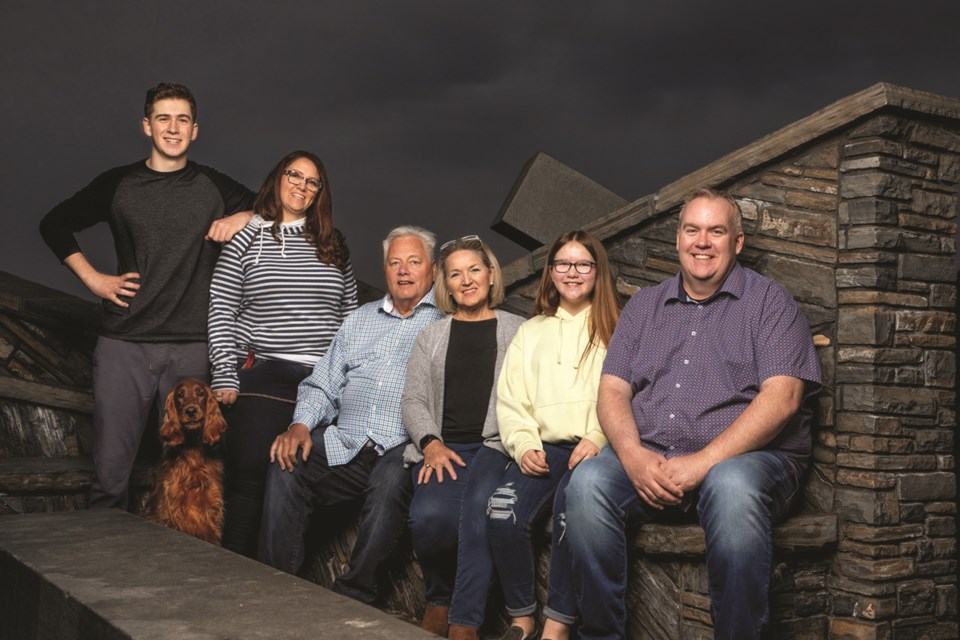 Chris MacDonald (right) was diagnosed with multiple myeloma in 2018. With the support of family and friends including (from left) son Alec, wife Dominique, in-laws Bob and Claudette Coutts and daughter Angelique, he continues to battle the incurable cancer. Photo by Dan Kurz/For Airdrie City View

Although the COVID-19 pandemic has changed the format of a local Multiple Myeloma March, it hasn’t put a damper on an Airdrie family’s determination to support one of their own.

“This walk raises funds that go directly into research, so it’s really, really important. I feel like we’re walking for a cure,” said Dominique MacDonald, who will participate in the fifth annual Greg Roberts Memorial Myeloma Walk/Run Sept. 13.

MacDonald said while cancer touches everybody, multiple myeloma – a type of incurable blood cancer ­– has specifically impacted her family. After dealing with back pain beginning in 2017, MacDonald’s husband Chris was diagnosed with multiple myeloma in 2018.

“Nothing pulls the rug from under your feet like getting a terminal cancer diagnosis when you’re 47 years old,” MacDonald said. “As a family, we really struggled.”

According to Dominique, her husband received a stem cell transplant in August 2018 and was doing well ­– for two years, the cancer was dormant. Unfortunately, Chris’ cancer returned earlier this summer.

“Multiple myeloma is a really vicious cancer in that you get it treated and then the cancer mutates, so it appears differently,” MacDonald said. “It learns from the treatment you just had.”

As Chris continues to undergo chemotherapy treatment this fall, Dominque said it was important for her and her family to march in support of myeloma research, prompting them to sign up for the Greg Roberts Memorial Myeloma Walk/Run.

“The research and science is really the most important thing to extending Chris’ life at this point,” she said.

According to Michelle Oana, director of Development and Community Relations at Myeloma Canada, the Greg Roberts Memorial is the local iteration of the Multiple Myeloma March. In total, Oana said 32 communities across Canada will host a march this fall.

She added Airdrie’s march is named in memory of Greg Roberts – a local man who passed away from multiple myeloma in 2014.

Nationally, Oana said the goal is to raise $650,000 for myeloma research, and the local fundraising goal is $30,000. Those goals were set before the COVID-19 pandemic fully took form, she added, and may appear ambitious considering the new reality.

The funds raised through the marches go towards research into myeloma, which Oana said is the second most common type of blood cancer.

“It is a cancer of the plasma cells, which is a type of white blood cell that you find in bone marrow,” she said. “Those plasma cells play a huge part in our immune system, so patients who get diagnosed with myeloma often have recurring infections or a weakened immune system, and there’s other complications that come with it.”

Because of COVID-19, Multiple Myeloma Marches will be held virtually this year, Oana said. Rather than hosting in-person events as in years past, people are encouraged to register, fundraise and then walk or run a route in their own neighbourhoods at the same date and time the event would have been held.

As of Sept. 8, 31 people were registered for the Greg Roberts Memorial Walk/Run, but Oana said that number doesn’t tell the whole story of who will be taking part.

“What’s been happening is a team captain will register and tell their friends, ‘Hey, come over to my house and let's do the walk in our area,’ so we don’t have a true number,” she said.

MacDonald said she plans to walk with Chris and their three children, depending on how Chris is responding to his current treatments.

“Five kilometres is a long way for him,” she said.

She added her team, “Chris’ Crew,” has members across Canada who will all participate at the same time in their own locations.

“A few members of our virtual team are local and they will join us on our walk,” she said. “Basically, it will just be a 5K. It will be really informal… It won’t have that event feel, because it’s just a group of maybe five or six people walking.”

Despite missing the “pomp and ceremony” of past walks, MacDonald said the purpose of the walk remains the same and will fuel the team.

Even though a large-scale community event can’t take place this year, MacDonald still hopes people in Airdrie will support the cause by donating to myeloma research.

“Multiple myeloma is in Airdrie,” she said. “It hits close to home to many families.”

Oana added donations can still be made at myeloma.ca even after the walk takes place.

“We count on these funds to help invest in research, so we’re really trying to stress that part to our community ­– even though the event doesn’t look the same as it may have in the past, it’s still happening in a different way and we really count on their support to make it happen,” she said.