Editor's Note: This article contains graphic descriptions that could be upsetting to some readers. Discretion is advised. The horrors Airdrie-based family physician Dr.
Jan 3, 2019 12:01 AM By: Airdrie City View 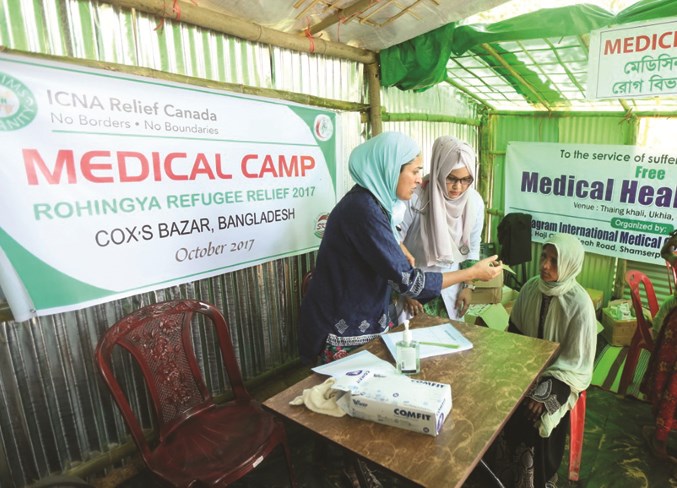 Dr. Fozia Alvi (left) has made two humanitarian trips to the Cox's Bazar Rohingya refugee camp in Bangladesh since 2017. Her experiences led her to form a foundation to deliver medical services and aid to refugees around the world. Photo Submitted/For Rocky View Publishing

Editor's Note: This article contains graphic descriptions that could be upsetting to some readers. Discretion is advised.

The horrors Airdrie-based family physician Dr. Fozia Alvi saw and heard of during her humanitarian missions to refugee camps in Bangladesh in 2017 and 2018, will forever be with her.

Most of those reaching the refugee camps are women and children, including 70,000 pregnant women – a fact, Alvi said, which compelled her to do what she could to help.

“Most of their husbands were killed, their children were killed. Sometimes, they were delivering in the water or in the forest,” she said. “There was not a female doctor…in those camps. Basically, I went for those pregnant women – to take care of them.”

According to the United Nations (UN) High Commissioner for Refugees, more than 700,000 Rohingya Muslims have fled their homes in Myanmar to seek refuge in neighbouring Bangladesh, after facing violence and persecution due to their religion. The majority-Buddhist country has denied citizenship to the Muslim minority since 1982. Alvi said she reached out to Islamic Circle of North America (ICNA) Relief Canada and asked them to help her travel to the Cox’s Bazar refugee camp in Bangladesh.

“I did not have any connections on the ground – I did not know anybody in Bangladesh [and]  I don’t know the language,” she said. “I asked [ICNA Relief] to ask if they needed doctors, and they connected me with the local doctors on the ground.”

Alvi said she was “horrified” by what she found when she first traveled to Cox’s Bazar in October 2017.

“There was about one million people sitting with no help at all – no medical care, no clean water,” she said. “I was never trained to handle something like that. Those people were suffering emotionally and psychologically, in so many different ways.”

The stories she heard from the refugees, Alvi said, were difficult to comprehend – and they will stay with her forever. One involved a young girl she met at the camp in 2017. The child had witnessed the Myanmar military repeatedly rape her mother, kill her father and throw her six-month-old sibling into a fire.

“When I looked at her, honestly, my heart sank because it was too much for me to handle. She was the same age as my daughter – 11 years old,” Alvi said. “When I came back home, I couldn’t sleep for months because I kept thinking about that girl.” Alvi made a second mission to the refugee camp in August 2018.

After returning home, she said, she decided she needed to “raise her voice” and increase awareness about the crisis. She has since been invited to speak at the Women in the World Summit in Washington, D.C., in March 2018 and again in Toronto in September 2018, has given interviews to a variety of media outlets across the world and met one-on-one with Prime Minister Justin Trudeau in September 2018.

“He asked me what I wanted him to do [and] I said, ‘At least declare it as a genocide,’” she said. “The government’s fact-finding mission report released in September also said it was genocide – it meets all the criteria.”

She also asked Trudeau to revoke the honorary citizenship of Aung San Suu Kyi, the State Counsellor of Myanmar – the Canadian government did so Sept. 28, 2018, Alvi said, a few weeks after her meeting with Trudeau.

All of her efforts, she said, are aimed at ensuring the world knows about the crisis and identifies it as genocide. Alvi has started a foundation – Humanity Auxilium – to help spread her message and raise funds.

“We need to step up now. The Rohingya want to go back to their homes but there’s nothing there – the local Buddhists have been given their land. We need to have a land, inside Myanmar, under UN protection, where the Rohingya can rebuild their society and feel safe,” she said. “How come this is happening in this day and this age, and how ignorant we are that we’re not doing anything?”

More information, including how to donate, can be found on the Humanity Auxilium website – humanityauxilium.com