An Airdrie artist’s portrait of Canadian singer Gord Downie started out as a labour of fandom but has drawn attention from across the country and around the world.

An Airdrie artist’s portrait of Canadian singer Gord Downie started out as a labour of fandom but has drawn attention from across the country and around the world.

“I’ve gotten comments from people as far away as Australia, from people in Buffalo and Maine and all across Canada,” said Luke Carruthers, 45. “It’s just been really incredible, the amount of feedback and positivity this has generated.”

Carruthers' portrait of the late Tragically Hip singer Carruthers is approximately eight feet tall and five feet wide, and is composed of nearly 11,400 pennies glued to a sheet of plywood and barn boards Carruthers purchased from Springbank.

“I kind of wanted to finish it with that extra piece of Canadiana,” he said. “The pennies as well are all Canadian pennies. I took out all the American pennies; I thought it was kind of important to do.”

According to Carruthers, the project began in 2017. Seeing people at his workplace rolling pennies from donation boxes for the Alberta Children’s Hospital, he offered to buy the coins.

“I was originally going to do a penny floor in the basement,” he said. “We decided if we ever move, we wouldn’t be able to enjoy it or take it with us.” 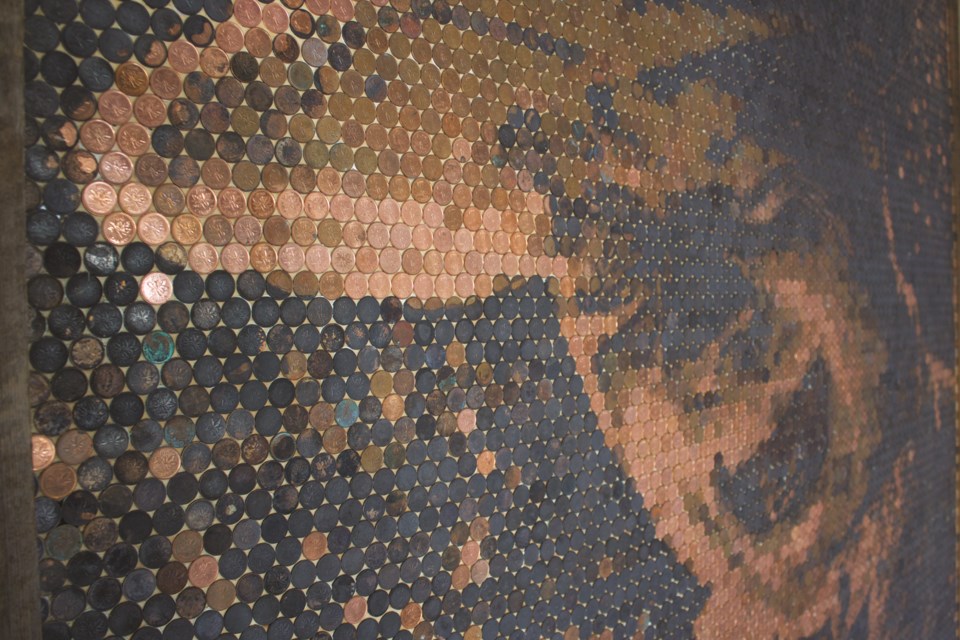 Carruthers used more than 1,000 Canadian pennies to depict Gord Downie. Photo by Ben Sherick/Airdrie City View
Instead, he was inspired to pay tribute to Downie after the Tragically Hip announced the frontman had been diagnosed with brain cancer and the band would embark on a final tour.

“At first the plan was, let’s just do this with all the natural colours of the pennies – obviously, newer pennies are quite a bit shinier, more reflective," he said. "The older ones are darker and don’t reflect.”

Carruthers said this method didn’t meet his desired vision. Instead, he experimented to find a way to achieve the shades he needed. After trying vinegar, dish soap and chlorine bleach, he arrived on a chemical used by jewelers called liver of sulphur.

“I started soaking these pennies in this liver of sulphur, and it’s quite a process – the water has to be boiling hot for it to work correctly,” he said. “Newer pennies don’t have as much copper in them, so those ones didn’t work very well.”

This process led to certain “swirls and bubbles” on some of the pennies that he incorporated into the design of the portrait to make it look more realistic.

Starting at the top and working down, Carruthers went line by line, gluing the pennies in place. He estimates the project took him 300 hours.

Carruthers said he picked away at the project for several years, but suddenly had an abundance of time once the COVID-19 pandemic began earlier this year.

During the pandemic, he said, the role of art has changed.

Whether it’s murals depicting George Floyd – the black man killed by police officers in Minneapolis, Minn. in May – or artwork highlighting the heroic efforts of first responders, healthcare professionals and other frontline workers, Carruthers said art will tell a story about what it was like to be alive during this time.

Carruthers’ artwork tells a more personal story – one of fandom and love for a particular music group.

“I’ve been a fan forever,” he said of his appreciation of the Tragically Hip. “The first time I heard them, I think I was 14 or 15, working at my dad’s record store. I heard them on one of these little sampler CDs they used to send out with all their new acts they were pushing. I heard ‘Blow at High Dough’ and I was just blown away.”

Carruthers said he attended the Tragically Hip's final shows in Calgary, which he described as “amazing” and “emotional.”

“After we saw those shows, I started thinking about what I’d do and started trying to map it out in my head, how I was going to make this project happen," he said.

The band unites Canadians, Carruthers said, recalling a time he travelled to Australia and struck up a conversation with fellow countrymen who noticed his Tragically Hip shirt.

“It sort of felt like he was telling some of our stories and reminding us there’s these little towns and these little places out there where other Canadians live.”

Carruthers said Downie, who passed away in 2017, also inspired new conversations about Canada’s history through his Secret Path multimedia art project, which focused on the history of residential schools.

“It’s really changed the landscape of our conversations of who we are as a nation and how do we treat each other and where are we going to go forward,” Carruthers said.

During the course of the project, Carruthers said friends and family continued to donate pennies to him, and he estimates he has enough for another artwork of some sort.

“I’m not sure what yet,” he said, adding he’s considered doing a picture of the full Tragically Hip lineup.

With his first project complete and drawing attention worldwide, Carruthers said he’s been approached about displaying the portrait at galleries across Canada. Ultimately, he said he wants the art to be displayed somewhere public where other Hip fans can see and enjoy it, adding he hopes to plan a showing somewhere in Airdrie in the near future.