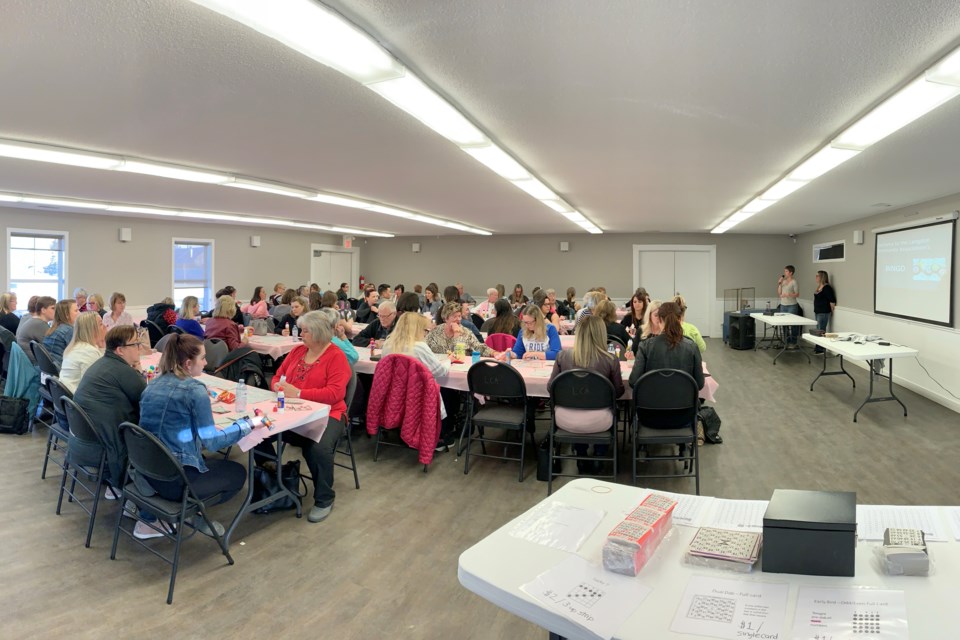 The Langdon Community Association hosted its first adult bingo April 12. The association has been licensed to host a monthly bingo for the next two years. Photo Submitted/For Rocky View Publishing

The Langdon Community Association (LCA) is inviting adults in the community to get their daubers ready and come out for its second bingo night, May 17 at the Langdon Field House.

“It’s just a fun night out that’s inexpensive, and you have the chance to win,” said Nicole Porquet-Seitz, bingo chair for LCA. “You can just relax and enjoy meeting new friends, or maybe some old ones you haven’t seen in the community for a little bit.”

The newly-added monthly bingo nights, Porquet-Seitz said, are designed to provide hamlet residents with a recreational activity that doesn’t necessitate driving to another community.

“For us, it’s just part of what we’re supposed to do as a community association,” she said. “It brings the community together, it brings neighbours together and allows for opportunities to make connections so that people feel like Langdon’s home, versus having to go to Calgary for everything.”

LCA’s objective, according to Porquet-Seitz, is to offer events for residents of all ages. Since Langdon’s demographics skew younger, many activities are geared towards those age groups, but she said LCA received feedback it could offer more opportunities for adults and seniors. Bingo was a specific request, she added.

Besides being a fun outing for participants, the bingo nights are also an important way for LCA to fundraise. While there are no specific capital projects in the works at the moment, Porquet-Seitz said the regular events will help LCA fill their coffers for the future.

According to Porquet-Seitz, LCA began the licensing process with Alberta Gaming, Liquor and Cannabis (AGLC) during the summer of 2018. LCA received its bingo license in April and held its first bingo night April 12.

That first event surpassed expectations, she said. Twenty people are required for the events to go ahead, but the first night drew 66 – ranging from seniors to younger couples, and from work groups to new moms. The first bingo night wrapped up shortly before 10 p.m.

“It was actually a really good time,” Porquet-Seitz said. “Everybody enjoyed themselves and we got lots of suggestions on how to improve things from the bingo experts.”

Applying that feedback, LCA is ready for its second event. Doors will open at 6 p.m., with a bonanza-style game starting at 6:30 p.m., followed by a regular bingo at 7 p.m. Admission to the event is free, with bingo cards available for purchase at $1 each. Porquet-Seitz said a concession is also available, and the event is cash only.

LCA is licensed to offer the games for two years, and will hosting bingo nights every third Friday for that duration. Once the license expires, according to Porquet-Seitz, the organization will decide whether to continue hosting the events.

“We also have the option that we can have a minors’ bingo, once we get going here,” she said. “We hope to do that in the future, once we get this part of the bingo going and rolling.”