The Kathyrn-Irricana-Keoma (KIK) Fifty Plus Club held its annual birthday party for members aged 80 and up June 9, in conjunction with Seniors’ Week. “Everyone gets excited about it,” said Barrie Hutchinson, director at KIK.
Jun 19, 2018 12:01 AM By: Airdrie City View 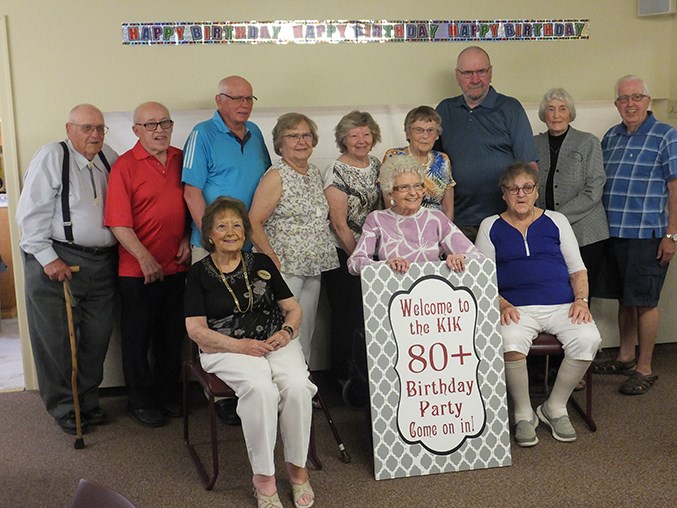 The KIK Fifty Plus Club celebrated members aged 80 and up at the club hall in Irricana for Seniors&#8217; Week.

The Kathyrn-Irricana-Keoma (KIK) Fifty Plus Club held its annual birthday party for members aged 80 and up June 9, in conjunction with Seniors’ Week.

“Everyone gets excited about it,” said Barrie Hutchinson, director at KIK.

The 80-plus party has been running annually for 30 years, according to Hutchinson. It gives the club the opportunity to celebrate seniors that don’t have many opportunities to leave the home.

“It’s a neat deal just to see these old seniors get out and enjoy something, because a lot of them are home-locked – mobility issues and whatnot,” he said. “They always seem to struggle up enough to get out to this.”

Many of the seniors in the area are farmers and homesteaders that have lived there for a long time, he added. Many are long-time members, as well, and have contributed to the community in many ways, not the least of which is volunteering.

“There’s a lot many of us could do to help out seniors,” he said.

The KIK club offers a place for seniors to congregate and engage, and holds events year-round – including pot luck suppers, movie nights and art classes.

Despite that, Hutchinson said some of the seniors he reaches out to are embarrassed to need help. He said he wants them to understand there are people willingly offering assistance, out of appreciation.

Most of the group’s members attended the celebration at the KIK Hall in Irricana, according to Hutchinson. They had sandwiches, desserts and a cowboy poet who shared stories of growing up on a farm – something many could enjoy and connect with, thanks to similar backgrounds.

Everyone seemed to enjoy the night, according to Hutchinson. One, in particular, he said, “couldn’t stop giggling about it.”