With the help of a province-wide municipal grant program, Genesis Place has installed new LED lighting throughout its facility in an effort to lower energy costs and curb its environmental footprint.
May 14, 2021 7:00 AM By: Carmen Cundy
Previous Next
Genesis Place has implemented new LED lighting throughout the facility in an effort to reduce expenses and its carbon footprint.
Expand

With the help of a province-wide municipal grant, Genesis Place Recreation Centre has installed new LED lighting throughout its facility in an effort to lower energy costs and curb its environmental footprint.

Through the program, MCCAS provided 75 per cent of funding for the project, according to a press release from the City of Airdrie, totaling $272,000 of the $384,000 needed to complete the installations.

“I think the return [of this project] is two-fold,” said Brad Anderson, manager of Genesis Place. “One, we’re able to reduce our annual utility expenditure by about $27,000 a year.

“[Two], we have much brighter lighting in a lot of our activity areas, which makes it safer for those residents that are participating in sport activities and also [provides] a more welcoming kind of environment with the brighter lights as well.”

Anderson said that with the added savings, the facility can pay off the City’s portion of the investment in about three-and-a-half years, making the 500 fixture replacements at Genesis Place a profitable venture.

Through the REC program, MCCAC aims to help the City of Airdrie and other municipalities reduce energy use and greenhouse gas emissions by providing financial rebates to help identify and implement energy-saving projects. 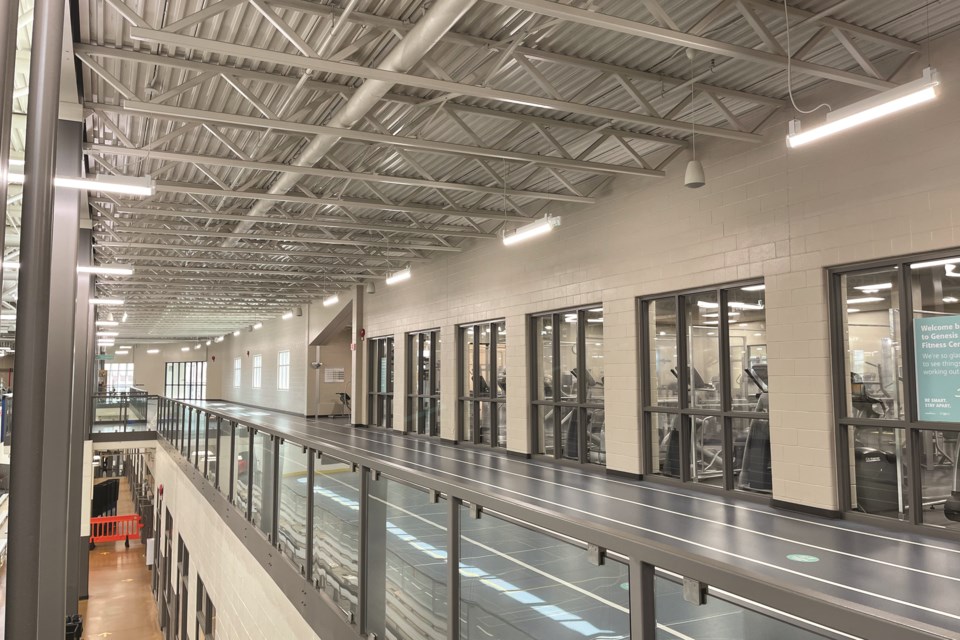 “We are extremely pleased to receive support from the Municipal Climate Change Action Centre’s REC program to upgrade LED lighting in Genesis Place,” said Mayor Peter Brown the City's news release. “The impact of this investment will not only make Genesis Place safer for residents to enjoy, it will also lower operational and maintenance costs, while lowering the carbon footprint of the facility each year.”

According to Anderson, many of the light fixtures at the recreation centre are original to the building, the older phases of which were built in 2004 and 2008 prior to the widespread implementation of energy-friendly lighting systems. He said the REC program has allowed the facility to complete some much-need upgrades, reduce utility expenses and provide a better experience to members of the facility.

“Monthly utilities are among the largest costs of operating Genesis Place and the City of Airdrie arenas,” stated Anderson in the release. “Administration has strived in recent years to invest in projects that both lower our operational costs while enhancing the experience of our residents and sport users.

“The [project] has allowed us to significantly upgrade our lighting levels, which improves the safety and visibility in our active living amenities, while greatly reducing utility and maintenance costs,” he added.

In addition to the LED lighting project, Genesis Place has implemented energy auditing throughout the facility, and with the help of REC funding, has previously added solar panels to the roof of the building.

Anderson said they are looking to implement more projects in the years to come with the help of the REC program, including a LED lighting project at the Ron Ebbesen Arena, as well as upgrades to the Plainsman Arena on the west side of town.